Our mission is to compare the CORSAIR H70’s performance to another top all in one liquid cooling system as well as a top air cooler. The cooling fans have been installed in default configurations. These tests were performed with all the coolers powered directly by a fan controller or straight from the PSU to eliminate any variables. However, the Vantage ALC’s coolant temperature dictates the speed of the fan depending on the mode selected. The Vantage ALC was tested using Silent and Extreme modes which are the closest options to slow and high speed. A trusty SPL meter 24 inches away from the case was used to measure noise levels for all the coolers.

Each cooler was burned in for an hour using OCCT at default settings so that the thermal paste could settle. Then, the system was left to idle for an hour in preparation for the final thermal test. After an idle temp was recorded, each cooler experienced a final CPU burn in with loaded temps recorded at the end. If the coolers can manage temps successfully under OCCT, they’ll never fail you in regular use, in our humble opinion.

Keep in mind, OCCT pushes the CPU cores to maximum load. You may never see this kind of load often, if at all, with regular system use. But, the cooler should also be able to handle the worst case scenario. Here’s what we found…

I’m not surprised to see the dual fan H70 out cool the single fan Vantage ALC. It’s because the Vantage’s fan speed is dictated by the liquid’s temperature automatically with no manual control over the fan speed. Unless those coolant temps start to hit 40-45 C, the fans won’t quite hit max. It’s only when overclocking do we get to see a bigger difference in performance. 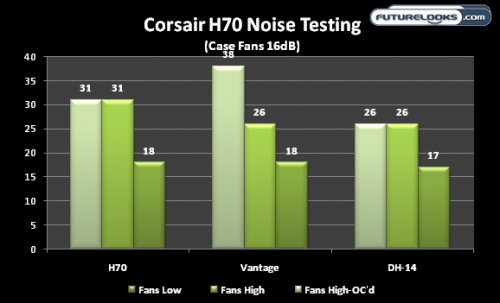 The H70 was mostly audible at high speed and very quiet like the Vantage ALC at low speeds. The Vantage fan doesn’t crank up high enough to be bothersome since the coolant didn’t get very hot. The Noctua NH-D14 was the least audible of the three on average even though it has two cooling fans.

The H70 didn’t top 31 dBA at full speed when measured with the case panel off. The air seems to pass through the radiator with relative efficiency meaning very little air restriction which can increases noise. But like any decent case, the noise levels drop when it’s closed up.

While some of you won’t overclock your computer, it’s here that you get to see the brute cooling potential of these coolers. For instance, the once quiet Vantage finally has to rev its single 120mm cooling fan up to try and control the higher liquid temps creating a 43 dBA wall of noise completely surpassing the H70 with its meager 31 dBA. The Noctua NH-D14 was much quieter than both but really held it’s own as one of the best air coolers on the market today. 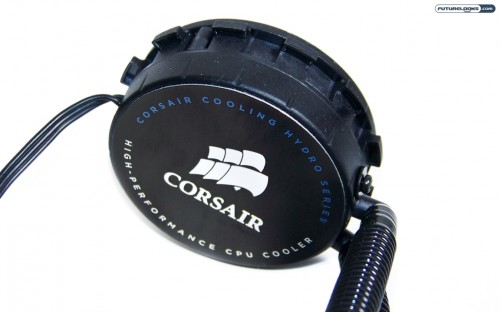 The Corsair Hydro Series H70 High Performance CPU Cooler is a top performing all-in-one liquid cooling system. Improved features like the extra thick 120mm radiator with dual fans plus a new low-profile heat exchanger increase performance over the original H50. Granted, it’s not the quietest liquid cooler around, but it also isn’t the loudest by any stretch when compared to the single fan Vantage ALC under extreme CPU frequencies.

While it’s not as flashy as the Vantage ALC with its LCD display, it isn’t plain or ugly either. The H70 is a bit more compact which is nice and performance and affordability seem to be main objectives in design. Both the Vantage ALC and H70 are priced identically at $109.99 US at most retailers, but recent rebates have the Vantage ALC hitting for as low as $89.99 US. The savings could go to adding an extra fan to upgrade the Vantage ALC to a push-pull configuration, but that’s another story.

In the end performance matters over flashy LCDs and it’s clear the CORSAIR H70 wins the day. It’s also much easier to manage than the enormous Noctua NH-D14 despite giving up a degree or two in pure performance. It’s definitely worth recommending.