Normally, I test my systems at full load by installing two Zotac NVidia GTX295 video cards along with my Intel Core i7 975 based system. While the system would undoubtedly not require more than 750 Watts during regular use, it would peak beyond that during initial boot and at maximum load. So instead, we’ll use something more modest, but just as demanding.

Our test system as configured includes:

As with all test builds, the latest BIOS, firmware, and/or drivers were installed. The Zalman ZM-MFC2 was used to track the PSU’s power consumption. And, a trusty industrial Volt Meter was used to measure the power rails and watch for voltage fluctuations during testing.

The most important test is the Load test. This is where we find out if the PSU can maintain its rated maximum wattage and efficiency. Then, for extra credit purposes, the PSU is pushed past its specs to see how far it’ll go before protective circuits do their job. 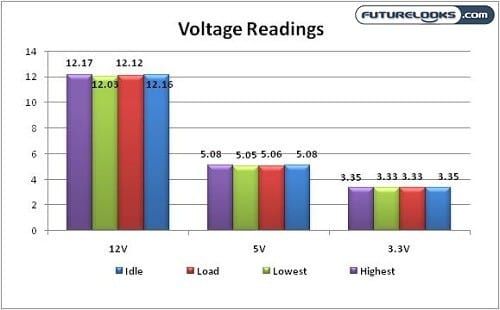 As you can see, the HX750W more than sufficiently maintained its 750 Watt output with flying colors. It was even 90% efficient which was not expected. Voltage fluctuations recorded during Load were extra minimal. The 3.3 and 5V rails were pretty much solid across testing. As with any PSU, the 12V rail showed a maximum .03 fluctuation during operations.

The design of the HX750W (two big boy capacitors) suggest there’s more underneath the hood. With that in mind and the PSU connected to a capable tester, the PSU eventually maxed out at a whopping 895 Watts. The protection circuits did a fine job.

What was really nice to see is that the PSU maintained an 88% efficiency. And, equally impressive was that the +12V massive rail didn’t go below +12.03V. In terms of performance, this is excellent. Going for the hat trick, the HX750W did in fact power the system with the two GTX295 video cards installed. The system never became unstable or failed to run 3DMark Vantage. 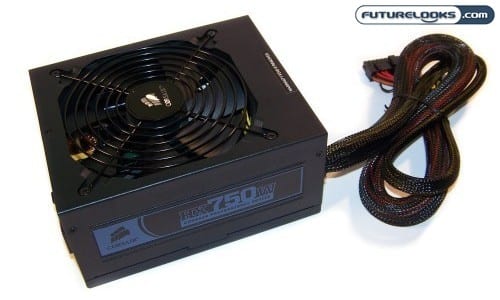 As far as I’m concerned, the PSU’s most impressive feature is its ability to maintain the amperage on each power rail, especially the 12V, at 100% load and beyond. In fact, it seems like the PSU is built with quality of output over quantity achieving a 90% efficiency. Could it be its built for more power, yet rated lower? Probably, but who’s complaining?

The Corsair HX75W Professional Series Power Supply earns itself extra credit as it continues to provide power well beyond specs. The extra performance is equivalent to getting some ice cream with your cake. You not only get what you paid for, but you also get a great deal more power output as insurance.

At a current price tag of $139.99 with a nice rebate at Newegg, it’s still cheaper than the bulk of the 80Plus Gold PSUs available. Plus, it’s much, much cheaper than the 850W Gold Plus PSUs as well. Base on value, performance, recommendations, and a 7 year warranty, it deserves nothing less than Editor’s Choice.