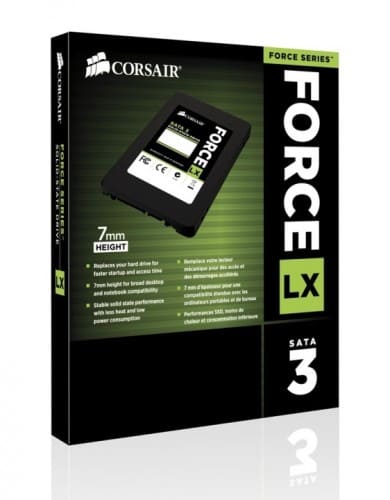 This is the year of the SSD, or at least that is how things are shaping up. We have always talked about what was the threshold of when the SSD would make mechanical HDD obsolete. The answer is we will never reach that point as long as HDD continues to increase its capacity for storage; however, we have reached that point for the primary drive in most computers with the Corsair Force Series LX.

There is no word of when we be seeing the 512 GB model hitting the market, but we have hopes of a sub-$300 price. The 128 GB and 256 GB models are available now. Thanks to Corsair, there is no excuse for you using a mechanical drive for your primary system drive. None. In the time it took you to turn your computer on, I turned on my system, started Opera, logged into Futurelooks, and wrote this. More details below.

May 27, 2014 — Corsair®, a worldwide designer of high-perform­­­­­­ance components to the PC hardware market, today announced the release of the Force Series® LX solid-state drives (SSD). Available in either 256GB or 128GB capacities, Force Series LX SSDs bring the amazing performance benefits of an SSD to new lower price point – making it easier than ever to move your PC into the SSD fast lane.

The speedy benefits of solid-state drives have long attracted PC enthusiasts, but high prices may have put off some users from making the switch to this faster storage technology. In response to this dilemma, Corsair is bringing all the perks of an SSD to a new, even more budget-friendly price point so everyone can feel the rush. With the Force LX 256GB costing $129.99 and the 128GB just $74.99, there’s never been a better time to upgrade to faster SSD technology.

A slim-line 7 mm aluminum housing makes it easy to install the Force LX into almost every desktop or notebook PC with a 2.5 inch drive bay — an ideal upgrade to breathe new life into a notebook, ultrabook or PC in need of a boost. Corsair’s bundled SSD Toolbox software utility is also included as a free download, allowing you to easily optimize your SSD’s performance, clone your existing hard drive, or securely erase all data on a drive. TRIM, NCQ and S.M.A.R.T. technologies automatically maintain drive performance for years to come, and Corsair tops off the package with a 3 year warranty and legendary customer service for total peace of mind.

The Force Series LX SSDs are available in 128GB and 256GB capacities at MSRPs of $74.99 and $129.99. The SSDs are available immediately from Corsair’s worldwide network of authorized retailers and are backed with a three-year warranty and Corsair customer service and technical support.