Inspecting the Caliber of the Sniper

In military weaponry speak, if the Scout case is a .308 rifle, the Sniper is indeed a .33 caliber Magnum. In other words, it’s a grade more serious in terms of impression and design. 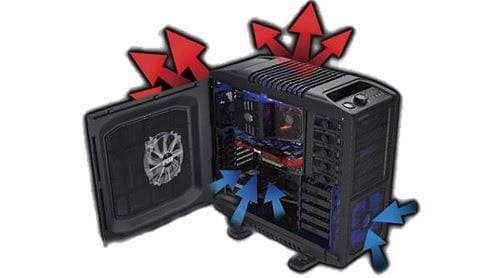 Because of the obvious larger cooling features, the Sniper is a bit wider and longer than the Scout. There’s more ventilation all over the chassis as well. The front chassis fan is so large that it takes up almost half of the bezel. The rest is devoted to five 5.25 vented face plates which easily pop out, I might add. 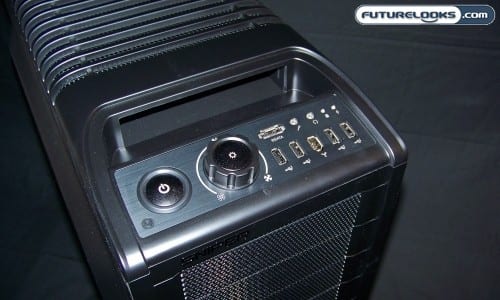 The top of the chassis is also raised in such a way that the top 200mm fan doesn’t crowd the motherboard. This creates sort of an open channel of sorts that double as a set of handles. This also creates some extra space for the chassis control features such as USB, Audio, External SATA, Fan LED power, and Fan speeds. The sides of the chassis are designed so that the side panel fan doesn’t encroach on the internal hardware and so that there’s extra room for better, easier wire management behind the motherboard tray. Winner! 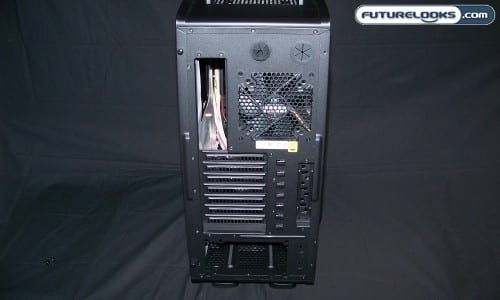 If you look at the back of the chassis, you’ll see the makings of the jet black chassis. The slightly wider frame provides more space for the 120mm fan, PCI slots, PSU, and of course, grommet enclosed water cooling holes. These holes are strategically located in case you decide to swap the top 200mm fan for a dual 120mm radiator of your choice. Score another point! 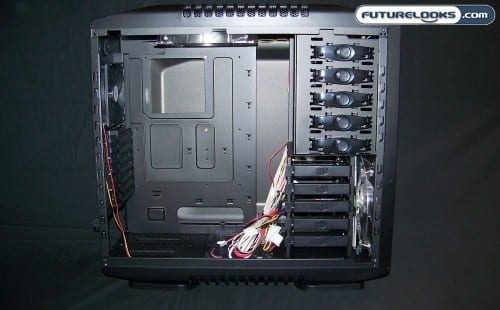 With the removal of four thumb screws, you can see the Sniper’s internal design. The motherboard tray has been extended which allows much easier use of any extremely large video cards like the NVidia GTX295 or ATI HD 5970 X2 which measures around 13 inches long. The motherboard tray is actually wide enough to hold an Extended ATX platform like the Skull Trail, though I wouldn’t recommend it.

You can see that there’s a CPU cut out for installing new CPU coolers without having to remove the motherboard. There’s also an oval cut out at the bottom for fishing any PSU wires up the back, or perhaps for tucking away the extras. That’s what we would do.