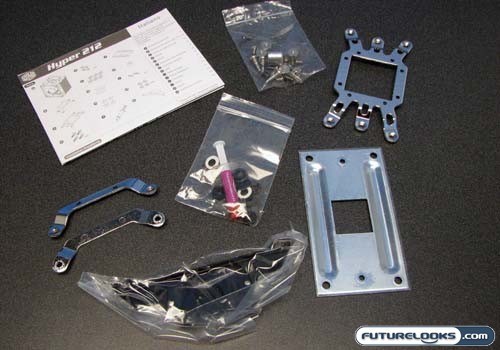 The Hyper 212 comes with more than just a few metal brackets though. Cooler Master provided a lot of kit with this cooler, including a whole lot of mounting hardware, washers, thermal paste, and an installation manual. Here’s a full rundown of what’s in the package.

The thermal paste is of particular interest, as it doesn’t appear to be the typical white thermal grease included with most CPU coolers. It’s grey, has a much thicker consistency, and a appearance reminiscent of other premium compounds like Arctic Silver. Hopefully it boosts the performance of this cooler. We’ll have to see in the following pages. 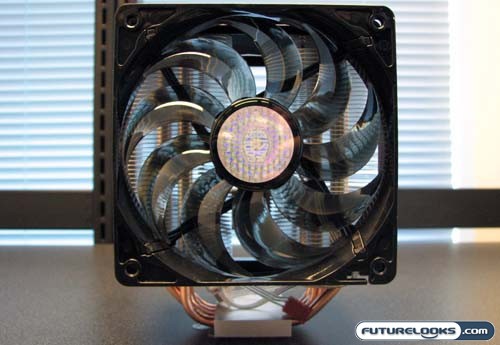 As I noted earlier, the Hyper 212 cooler sports a tower design. It has four copper heat pipes exiting a copper base and interfacing with two blocks of aluminum fins. The fan is mounted vertically, perpendicular to the motherboard, and blows over the fans towards the back of the heatsink. This air is then ejected by either the second fan that can mounted to the back of the heatsink, or by the rear fan on the case. 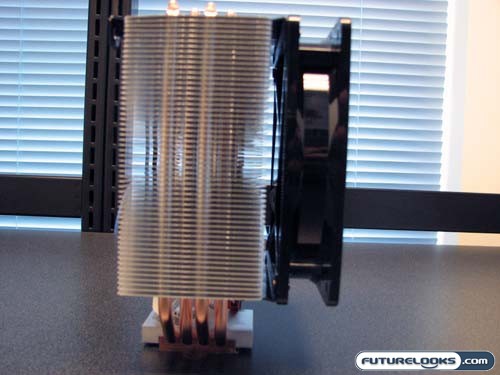 Front to back, the Hyper 212 is only 98mm deep (just south of 3 7/8 inches). While this cooler isn’t very deep, it is very tall, with a height measuring 160mm (just under 6 5/16 inches). Add to that a width that follows the fan width and you have a cooler that although will fit in a shorter case, you’ll want to make you have plenty of room around the socket and from the socket to the side panel. 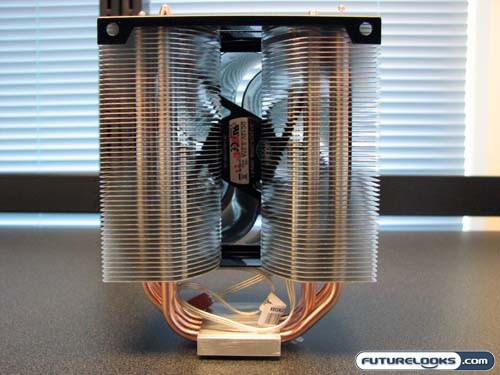 The back of the cooler is where you can really see the design come together. In an effort to increase the amount of surface area of the cooling fins, Cooler Master split them into two separate towers rather than make one solid set of fins. I’m not sure about the cooling efficiency of this design, as it would make more sense to have fins that span the entire length of the cooler. However, the lack of material in the middle is probably a contributor to the low price of the Hyper 212. That being said, Cooler Master does add a bracket for a second 120mm fan should your cooling come up short.

Real-Time Price and Stock Check – Shop LIke a PRO!