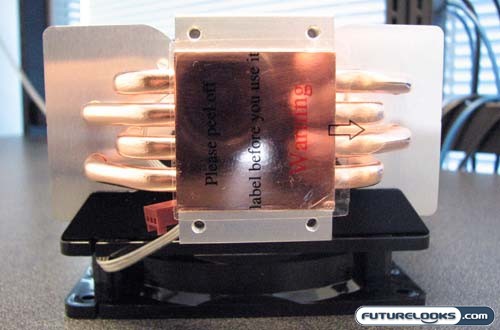 Finally we get the bottom of the cooler, which is where all the action is. As you can see Cooler Master has polished the surface to a near mirror finish, which even shows through the protective cover. This should maximize amount of contact between the CPU and the cooling block on the Hyper 212. This is very important as it allows for more heat to be transferred more efficiently to the heat sink. We’ll have to see how all these design choices pan out in testing.

To test the Cooler Master Hyper 212 CPU cooler, we installed it in the following system.

These components were installed in an OEM mid-tower case sporting two 120mm fans, one each at the back and front, and one 92mm on the right side cooling the hard drives. The hardware side of things is powered by a 700W heavy duty power supply, and the software side is driven by Windows Vista Ultimate.

This rig was chosen primarily for it’s stock unlocked Core 2 Extreme processor. With an unlocked multiplier we were easily able to push the processor from it’s default 2.67GHz to a zippy 3.2GHz, and provide a sufficient thermal challenge for the Hyper 212. For benchmarking, I used version XII SP1 of SiSoftware’s Sandra package to pin the CPU at 100% CPU consistently for a set duration of time.

Before we get to the numbers, we need to take a look at how the Hyper 212 cooler fit into the rig.

Installation of the Cooler Master Hyper 212 cooler was fairly easy, and with the instructions by my side I was able to complete it in under an hour with only a few issues. Now it should be noted that for both AMD and Intel installations, the motherboard will need to be removed. So before we go ahead with that rather arduous process, lets take a look at what we’re starting with. 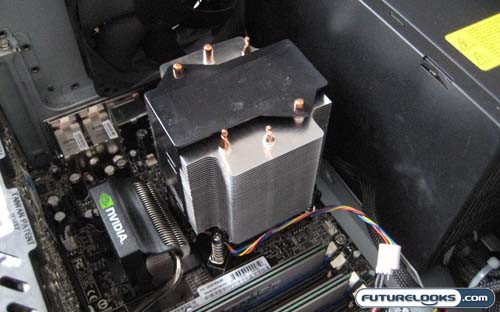 This little cooler looks at first like it’s passive and doesn’t sport any type of active fan, but there’s a power cable that leads to a 92mm fan sandwiched between the two cooling towers. While this is a good design and not unlike the Cooler Master Hyper 212, the 92mm fan in this OEM cooler sounds like a jet engine at top speed. It should be noted that the fan in the OEM cooler has a four pin connector, and can vary it’s speed based on the load and temperature of the CPU as reported by the motherboard. Since the Hyper 212 doesn’t sport this feature, we’re going to run both coolers at their top speed. 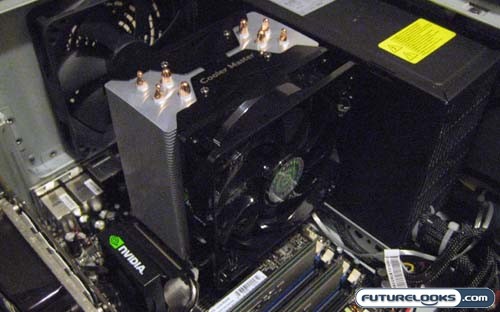 Now after having to tear apart most of my test rig, I managed to get the Hyper 212 cooler installed. Once it was in the system, I was able to really get a comparative look at how big the Hyper 212 is. On one side of the cooler, there’s only 1 cm or so between the cooling fans and the power supply. On the other side, the bottom fin is a hairs width away from the fins on the northbridge cooler. The backside of the Hyper 212 matches up almost perfectly with the cases rear fan, making a straight line for hot air to travel out of the case.

Real-Time Price and Stock Check – Shop LIke a PRO!