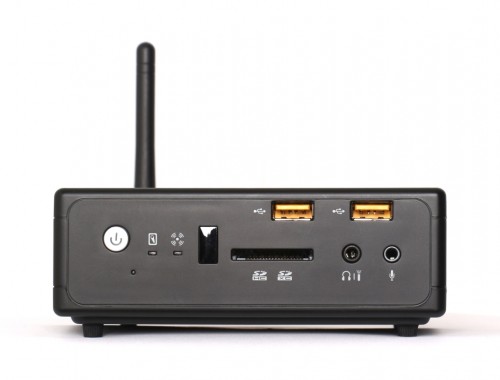 I hope you didn’t think it was just the standard sized ZBOXes that would be updated at Computex. ZOTAC actually brought even more to the party this year including some silent but deadly mini-PC models to add to the series. The new ZBOX C-Series has a lot of nice goodies beyond all the extras we are going to need.

The complete quartet for the C-Series include the ZBOX CI540, CI520, CI320, and the AMD based CA320. All feature completely silent operations thanks to the honeycomb ventilated case and passive processor cooling solution. You will also find all sporting 802.11ac Wi-Fi, Bluetooth 4.0, up to seven USB ports (at least two being USB 3.0), and HD digital outputs. You can pick which processor/VGA suits your fancy with dual and quad-core options available.

As we have come to expect from ZOTAC, there is a Plus model of each of the ZBOX quartet that comes with 4GB of DDR3 RAM and a 64 GB SSD. This could be the perfect answer to converting a TV or monitor into an AiO family workstation. It could also be the perfect on-the-go PC for those hotel TVs by just adding a wireless mouse/keyboard set. It is time to play with silence.

“Many users demand a completely silent PC for audio production, video and audio editing, content playback and other tasks. After many years of engineering to fine tune power and heat requirements, ZOTAC is able to deliver passive cooled mini-PCs with 4th Generation Intel Core i3 and i5 processors that satisfies the noise and performance demands of users,” says Carsten Berger, senior director, ZOTAC International.

Four ZOTAC ZBOX C-series nano configurations are available with a power-sipping AMD A6-1450 APU or Intel Celeron N2930 for the energy and value-conscious users while a 4 th Generation Intel Core i3 4020Y or Core i5 4210Y satisfy high-performance demanding professionals and enthusiasts. Plus versions of each ZOTAC ZBOX C-series nano mini-PCs preinstall 4GB of DDR3L and a 64GB SSD (2.5-inch) for users that just want to load an OS and go. 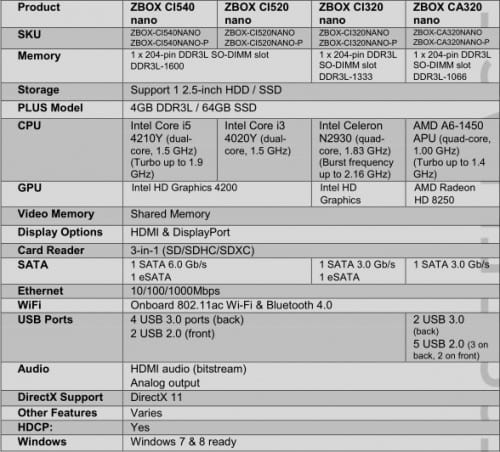