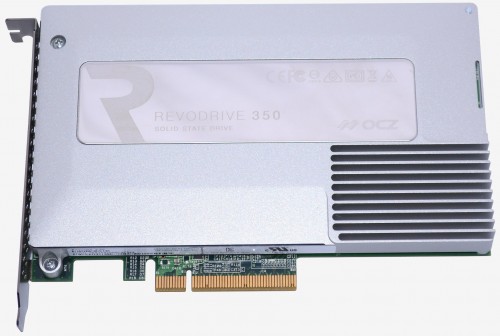 Ever since the Toshiba take over of OCZ, the company formally know for RAM and storage solutions has been making a surge back into the market with their many SSD products. This year’s COMPUTEX show is another step in their re-entry, with their booth both showing off their entire line of current products and facilitating the announcement of some new and exciting SSD solutions.

First up, OCZ will be unveiling a new Vector series drive. This new line of drives will feature a specs list aimed at the workstation and entry-level server markets. Details are still a little lite on this drive, but we’ll definitely be checking it out at the OCZ suite.

As for the existing products on display, OCZ will be showcasing the RevoDrive 350 PCI Express SSD, and the Vector 150 and Vertex 460 SATA SSDs. The former is a high performance SSD on a card, and meant for those who need the absolute fastest SSD storage they can find. The latter pair are aimed at the high-end enthusiast market, and mainstream markets respectively. On the enterprise side OCZ will be showing off even more, including both PCIe and SATA SSD drives and an accelerator component geared specifically towards SQL databases.

You can check out the full press release below, and keep an eye on Futurelooks for more info from the show floor at COMPUTEX 2014.

Along with the new Vector SSD, OCZ will also display its current product line which has completely transitioned to in-house Toshiba NAND flash. OCZ’s current client lineup offers high-performance yet cost-efficient SSDs for a variety of applications, targeting the mainstream and enthusiast markets with storage upgrades for workstations, desktops, and notebooks that include:

Continuing to drive innovations within the business and large-scale IT storage sector, OCZ will also display its comprehensive portfolio of enterprise flash and software storage solutions including: