Video Walkthrough of the SPEDO!

In order to give you a better idea of how impressive this case here, we enlist the help of Ramsom Koay of Thermaltake USA to take us through the features in this video…

The case should be available sometime this August but unfortunately, no pricing was available at this time. Ramsom did say that they will try to make this one very affordable so that enthusiasts will have a better chance of sampling the new direction Thermaltake is taking in design.

From the Thermaltake Skunk Works Division

In a private room guarded by Thermaltake’s own CEO, Kenny Lin, was a new weapon in Thermaltake’s cooling arsenal. Passage was gained with an exchange of information about ANTEC’s new Skeleton Open Concept Case and I was eagerly welcomed into the mysterious room.

To date, OCZ has been the only company to push to retail with their Cryo-Z cooling system which we had a look at back at CES 2006. Unfortunately, the huge honking size of the beast that sat outside your case made it difficult to transport and deal with despite the great performance. At CeBit 2008 this year, Thermaltake announced a self contained system built inside a case, but cannot be easily retrofitted to other cases. Leave it to Thermaltake to one up themselves and make Freon cooling inside your existing case possible and practical. 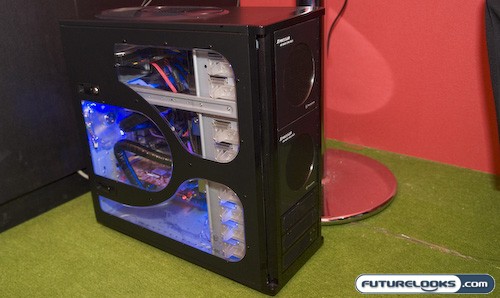 Kenny showed me a fully functional prototype of their brand new self contained internal Freon based cooling system. What makes this system different is that it fits into the space of four drive bays and is totally self contained. The system even uses standard DC power provided by MOLEX connectors on standard power supplies, unlike the aforementioned Cryo-Z which plugs in to your wall. Thermaltake has also solved installation issues by developing a special flexible metal piping that can be bent. In fact, the metal is so special that Thermaltake has applied for a patent on this material. This erases one of the major issues with Freon based coolers which is flexible installation. 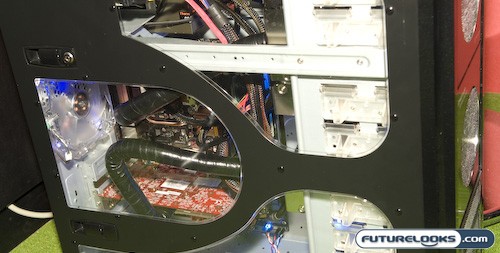 The quad bay phenom known currently as the ExpressCar ACS (Active Cooling System) was teamed up with a second unit that was Freon cooling an ATI 3870X2 Video Card. CPU temperatures while running 3DMark2006 Demo were 36C for the CPU and 20C for the GPU, which remained constant for the 20 minutes I was in the very tiny little room. They wanted to create something that everyone could use with no maintenance and no danger of condensation dripping on something inside the case. In other words, an every-person’s high performance Freon cooling sysem. They are also working on making the system work with both GPU and CPU so that the four bay sacrifice would be worth it.

Thermaltake plans to officially unveil the unit to the public at CES 2009, and then follow up with a release, maybe in time for COMPUTEX 2009. Although officially, there is no pricing information, I was told that the price would be based on a premium of 30 – 40% over competing water cooling based systems.