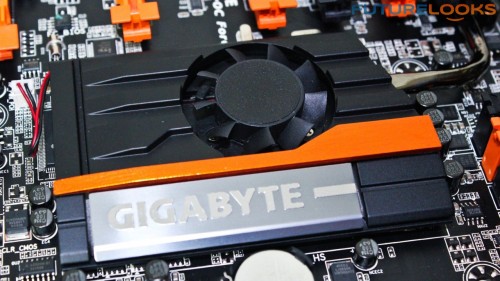 Today, we’re taking a detailed look at the GIGABYTE GA-Z87X-OC Force motherboard. The OC Force is designed to support any level of overclocking performance. It has the BIOS, component features, and physical design needed to ensure the very best results. With this in mind, we grabbed some of the best CPU coolers available as well as a couple Haswell LGA 1150 K-SKU processors to see if the OC Force can bring it, even in less extreme circumstances. 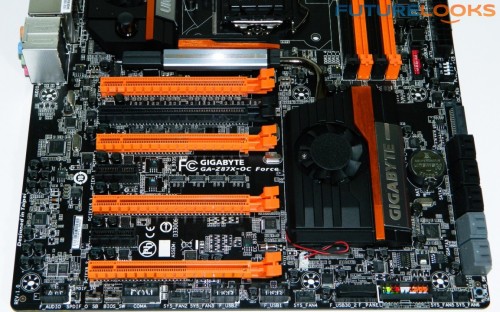 We originally saw the new OC series motherboards at a GIGABYTE press event in California earlier this year. In addition to seeing all the other new Haswell boards at the time, we enjoyed some more in depth demos of some of the features we will be checking out in a later section. If a thermos and LN2 is part of your daily diet of fun, then these boards are for you.

Before we start cooking processors, it’s important to note  that there are two Z87X-OC motherboards: A regular and a “Force” model. Even though these boards are intended to support high end overclocking, connectivity is still important as the boards target both the enthusiasts and people who simply want a great looking board. GIGABYTE’s website allows you to compare both board specs and connectivity. Rather than spam you with a very long nearly identical list, I’ve broken down the main differences between specs and features in the next section. 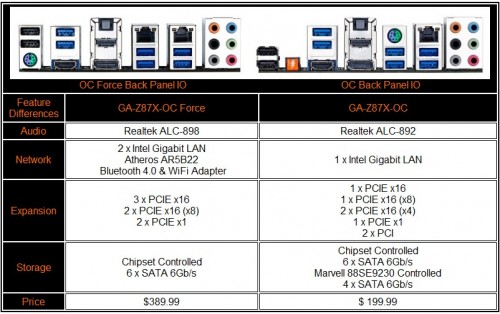 As you can see, different audio processors, network ports, expansion slots, SATA3 controller, and a few IO ports in the back are different. The Force has a bigger PCIE highway which is best for enthusiasts who want to utilize up to three PCIE 3.0 NVIDIA graphics cards to set some world records. However, if you only plan to use one or two, the regular OC will do just fine. A significant $190 US MSRP difference separates the two as the top end GA-Z87X-OC Force retails for $389.99 US MSRP while the regular GA-Z87X-OC retails for $199.99 US MSRP.

The more expensive Force also comes with dual integrated Intel LAN ports and an Atheros WiFi adapter making more suitable for a high end build with the machine pushed to the limit and a custom liquid cooling loop employed. In terms of audio performance, there’s going to be very little difference between the the two integrated audio processors. 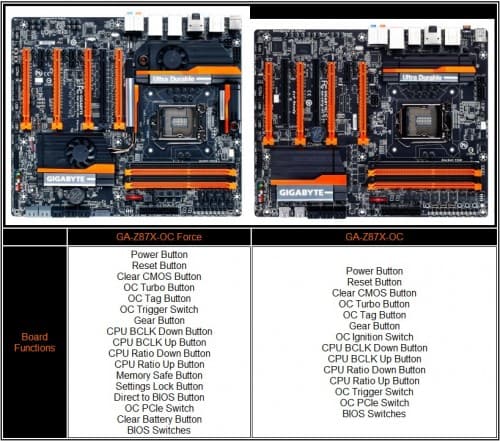 Moving over to interactive board features, you can see each board offers an array of usable physical features for insane overclocking of your Haswell processor. Mastering these features will depend on your patience and K-SKU Haswell processor as well as the user manual which is a basic reference guide. Otherwise, don’t be afraid to use Google if you need a little bit of help.

For the “Coles Notes” of what the buttons do, here you go:

Each board also has voltage points and an LED post reader next to all the buttons. This is a good place to easily see the boot code process. It’s also one of the easier places to reach with your meter if you suspect your power supply isn’t feeding proper voltage. LN2 enthusiasts tend to use these most as they tweak their way to world records. And, don’t let the regular OC board fool you. We’ve seen the board pushing 6 to 6.2GHz at GIGABYTE’s California offices.

Let’s have a closer look at the OC Force including what you get with this stunning extreme overclocking board!