The Level 10 is an iconic case, but no one could afford that. That’s why Thermaltake is back with the Level 10GT. It pays homage to the original Level10 while costing you a few fingers instead of an arm. Check out the video for the walk through of the new case and more…

Not shown was some new storage peripherals which include the MAX 5 and 5G external hard drive enclosures which support a single 3.5″ HDD. The MAX 5 supports USB 2.0 while the MAX 5G supports USB 3.0. Both provide eSATA connectivity.

There was also the new Frio OCK (OverClocker King) dual-radiator CPU cooler which we’ve stashed a pic of in the gallery at the end. The fan is removable for cleaning and surprisingly light for its size. We reviewed the original FRIO and it performed very well so we can’t wait to see what this one does.

Silverstone Tech
We came to see the finished CES 2011 Innovation award winning FT03 “Trash Can” case designed for micro-ATX/ITX systems. We’ve got a video below which also shows it off and some of the other new cases like the TJ08, TJ11 and RV03…

The TJ11 is a very large case and is some what similar to the Fortress 2 except that it makes use of the lower chassis area for things like hard drive storage. The Raven 3 (RV-03) is a bold step forward with its case venting and internal chassis design. It continues with the “stack cooling” effect by rotating the motherboard. Still a little ways away from being ready so hopefully we see the finished products at COMPUTEX 2011. 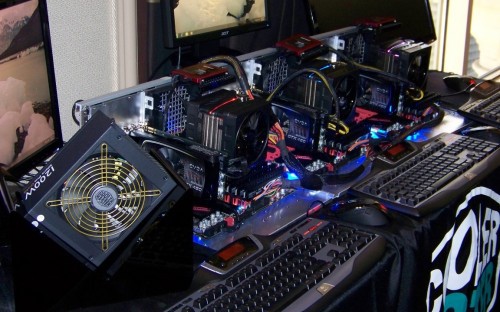 We haven’t heard much Coolermaster news the last few months. But, that’s because they’re preparing for CES 2011 where they demonstrated how their Silent Pro Gold 1200 watt power supply can power three separate gaming systems at once. Wonder if this would work for LAN parties, making it a little less crowded around the tables? 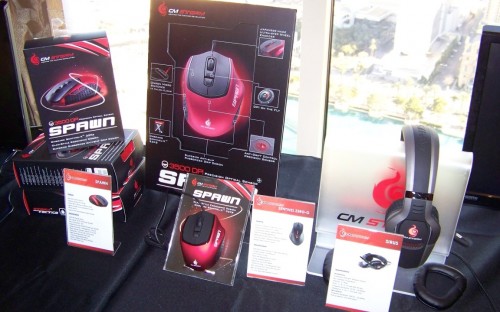 New to the game world is the Spawn gaming mouse featuring 3500 DPI, 20G acceleration, and 5.8 Megapixel per second 6400 FPS image processing. CoolerMaster has been promoting their CM STORM line for a while now and the accessories definitely look well tuned to the brand name.

There was a lot more to see at CoolerMaster than this. But, it was all tucked away in an “NDA room”. We can tell you that there were some future chassis, coolers, and peripherals. Hopefully we’ll be able to let loose at COMPUTEX 2011 later this year and show you this stuff.

CES often means tons of pictures that just couldn’t fit with each section. Take a look at the last page and you’ll some items you may have missed. In the meantime, we’ll be looking forward to taking closer looks at many of the industry’s top products. We have a whole year to critique and test everything. For more exclusive video only coverage, definitely check out our YouTube Channel for things you might have missed.