For the new Sony XBR-52LX900 HD television, which also happens to be 3D-capable, there is an integrated camera in the base that will recognize when there are people sitting in front of it. Using facial recognition, this unique system serves three different purposes.

First, it will see if there is actually anyone watching the TV at all. If it detects that you have left the room, it will automatically dim its backlight after a certain period of time has passed. They say that this can result in up to a 50% improvement in power efficiency. 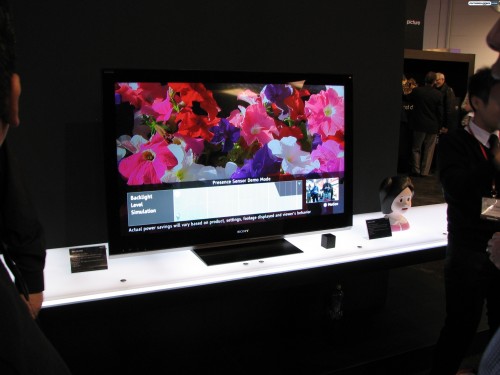 Second, the embedded camera has a Distance Alert feature. If you pull up a little too close, the screen will black out and tell you that you are too close to the screen. Your mom probably nagged you about this is a child, right?

Third, the facial recognition software will detect where the viewers are in the room relative to the television set. In doing so, it can then optimize both the audio and video to put the viewer in the “sweet spot.”

How Much Thinner Can They Get?

For most people, regular old flat panel TVs will do just fine. However, walking through the hallowed halls of the Las Vegas Convention Centre, we are once again reminded of our desire for the unbelievable. On display was a 55-inch LG full LED television that measured a mere 6.9mm in thickness. That’s about the same width as a pencil. As if that were not enough to whet your whistle, this TV needs only a power cable, letting you mount it almost completely flush against the wall. Check out our video walkthrough.

So, where are the input sources then? Those are in that separate box shown underneath the TV. This will stream uncompressed full 1080p HD signals to the television from across the room.

The Future of HDTV

If there is one thing I learned during my television research journeys at this year’s Consumer Electronics Show, it’s that the television manufacturers are pushing much of their focus away from “just” picture quality. Consumers are demanding more.

That’s not to say that picture quality isn’t important — LED TVs can have multiple zones for selective dimming, for example — but there is a definite shift in attention toward things like Internet media streaming, convergence in the home, and the availability of widgets and apps on the TV. And let’s not forget for 3D too. Prepare yourself for home entertainment in three dimensions.