What’s Going on with LG Electronics?

Even though they may come from the same country and offer some very similar kinds of products, it goes without saying that Samsung and LG have been competing with one another for a number of years. Just as Samsung had some cool things to showcase at the Consumer Electronics Show, LG had a few new toys up its sleeve as well.

This is above and beyond such innovations as the 6.9mm thin full LED high-definition television. That thing really is ultra slim, you know.

It’s not entirely clear when and if it will ever make its way onto the market, but the LG GW990 is an amazing piece of technology for us to consider. It’s officially being called a smartphone, but Frank Lee of LG Canada reminded me that it really fits somewhere between the smartphone and the mobile Internet device (MID). You can catch our quick interview with him on our YouTube channel.

The 4.8-inch panoramic widescreen is certainly attractive, but it does make the device a little bigger than what you would normally expect from a smartphone. The real kicker here is that you don’t get a typical mobile phone processor. Instead, the GW990 gets its juice from the new Intel Atom Moorestown processor. That’s right: Atom for a phone.

With this extra power, the GW990 is said to provide a PC class Internet experience and the ability to run three simultaneous applications. This multi-tasking ability uses something called “Multi-Window” and you swap between the apps by swiping your finger across the screen.

Based on my initial impressions, I expected some variant of Google Android to be found under the hood, but this is not the case. The LG GW990 gets the Moblin 2.1 operating system, which is Linux-based.

More on the Wireless Media Hub 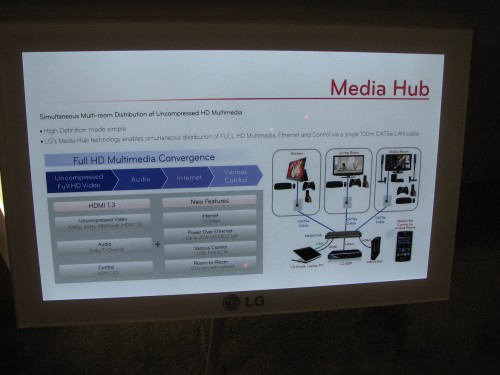 Remember that wireless media hub I mentioned in the TV technology article? I met up with another LG rep a little later on for some more clarification.

All of your input devices, like a notebook computer or an Xbox 360, connect to a wireless media hub, which in turn is connected to just about any wireless router. Their respective feeds can then be redirected to any compatible LG television in the home, being remotely controlled and redirected with an app on your LG smartphone, like the LG Expo.

The app seems very easy to understand and the audio-video feeds can be uncompressed full HD content. By using this technology, you can effectively have the same Xbox powering three TVs in three different rooms around the home.

What’s Next for Samsung and LG?

Product innovation is driven by consumer demand. Is there something you want to see from Samsung and LG? Be sure to visit our forums and let your voice be heard! Who knows? An important engineer or product manager just may be listening. Don’t forget to check out our YouTube Channel for more original Futurelooks videos from CES 2010.