With a big tower CPU cooler such as the SilverStone AR07, one would need a case (or chassis) worthy and big enough to make use of it. This is where the Primera Series PM02 case comes in. I even opted for the white, because all of my cases have typically been black, you know, I wanted something a bit different. 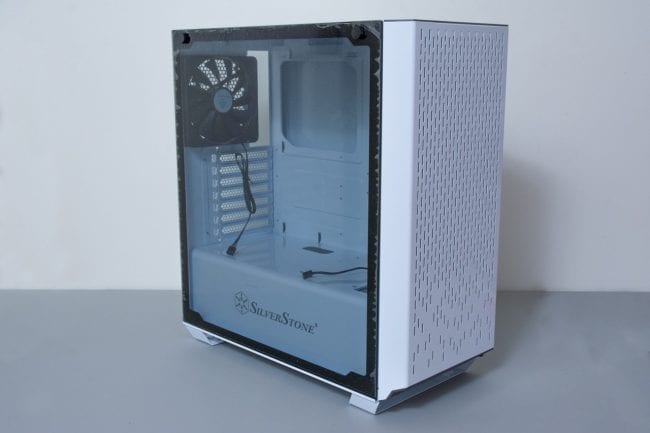 Now I do not have a photo of what is in the box. Majority of the items that come as accessories were already installed. In the case of the SilverStone PM02 case, the accessories included are:

Other noteworthy items are the tinted side panel, PSU shroud, easily removable front panel (access to the front fan filter) and more.

Upon opening the box, I was happy I went with the white case. Right off the bat, I find it aesthetically more pleasing than previous examples I have used, including the current Dell Inspiron case I am using for my main desktop. 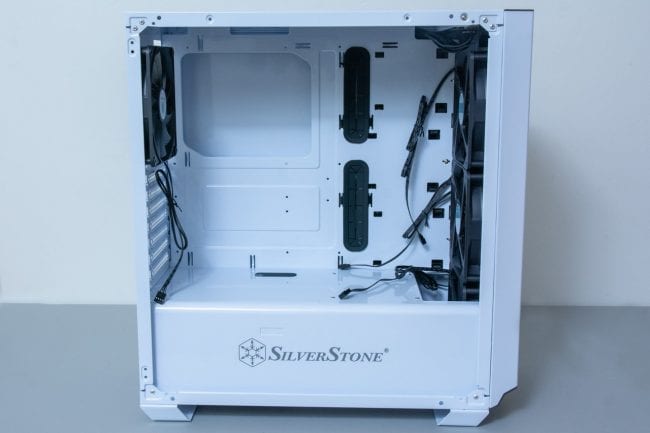 Removing the side window panel is quickly done by removing the two large thumbscrews at the top. This is one piece of tinted, tempered glass, so be careful when you put it down as it could shatter. When you place the panel back and screw in the thumbscrews, there are rubber grommets to help ensure you do not crack the glass. This also helps to ensure that the glass does not come in full contact with the metal.  The PSU shroud extends the whole way across the bottom of the case. There are rubber grommets to pass the motherboard power cable, though and some other wires if needed. On the top of the PSU shroud, there is also a small hole so you can pass cables as required as well. This all helps keep the inside of the case neat and tidy. Not only is it great for aesthetics, but it helps play a part in maintaining airflow unobstructed as much as possible. 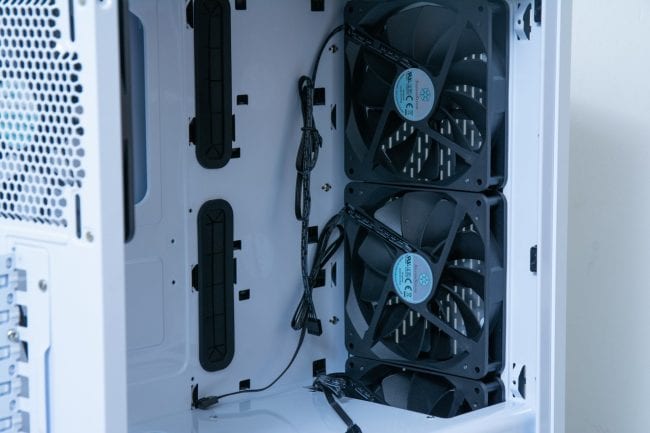 There are three 140mm fans at the front of the case. In the image above, you can see the topmost 2 with the third partially below the PSU shroud. This helps ensure there is more than enough air being brought into the case for cooling. I like how the third fan provides airflow to the hidden cables and PSU. I connected all three of them ,utilizing the CPF02 cable supplied by SilverStone. The CPF02 allows me to hook up three 4-pin fans to a single fan header on the motherboard. 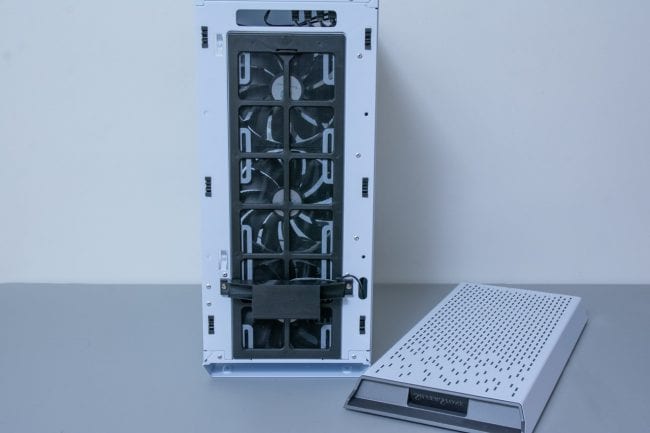 Removing the front panel is straightforward. You pull from the top front, and that will pop the panel off from clips that hold it to the front. This reveals the front fan filter that you can remove and clean/wash as needed. 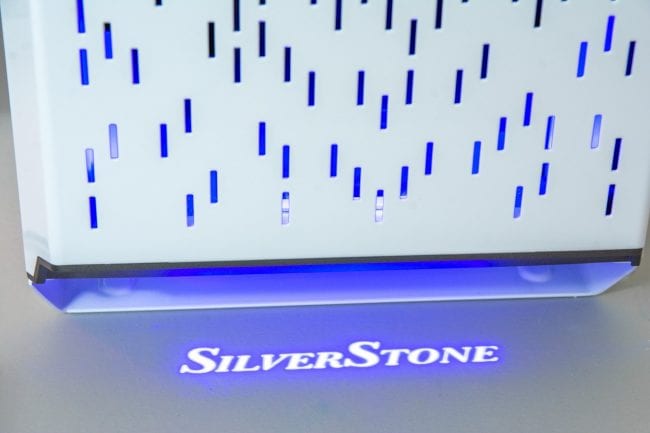 There is a small blue LED housing at the bottom of the front. This projects the SilverStone logo onto the bottom surface to which the case sits upon. A neat little effect though the only way to turn it off is by removing the power connector (SATA power). Perhaps a small toggle switch underneath could have been utilized, so you don’t need to remove the side panel to unplug the SATA power connector. For those who colour coordinate their computer components too, perhaps a future release could allow one to change the colour of the LED that displays the SilverStone name also. 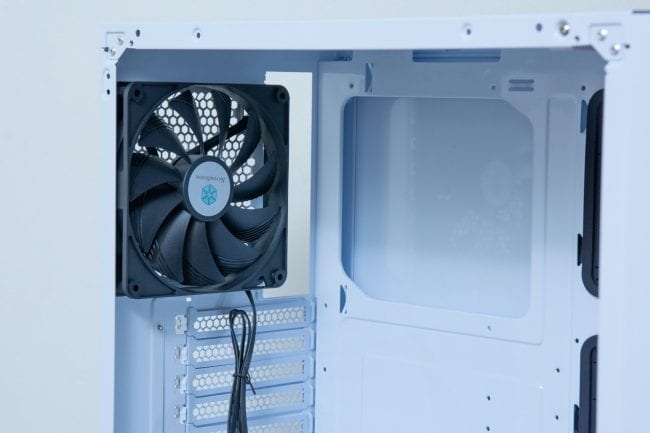 At the rear of the case is a single 140mm exhaust fan. You can also see the back of the case has an opening, which allows you to access the back of your motherboard where the CPU is located. 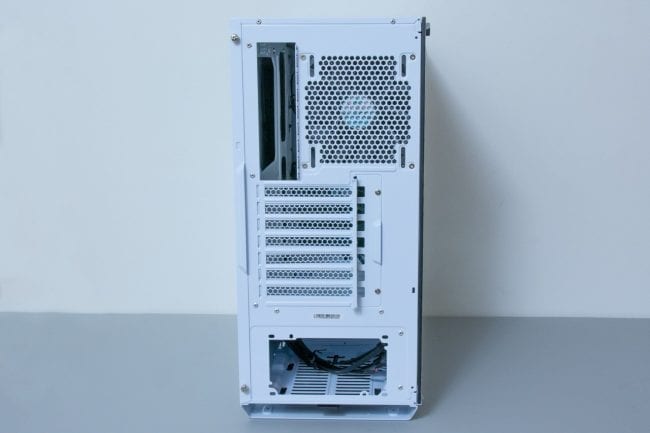 To the back of the case now. Small screws hold the slot covers in, so when you need to add/remove expansion cards, you do have to ensure you unscrew it so you can swing out the little retention portion. At first, I thought the PSU area was removable, but it is recessed a sliver, so you do need to remove the other side panel to install the PSU. It would have been nice to have been able to slide the PSU in from the back of the case as opposed to the side. When installing the PSU (later in the review), I had to cram a bunch of the power cables in at the same time as installing the PSU itself. 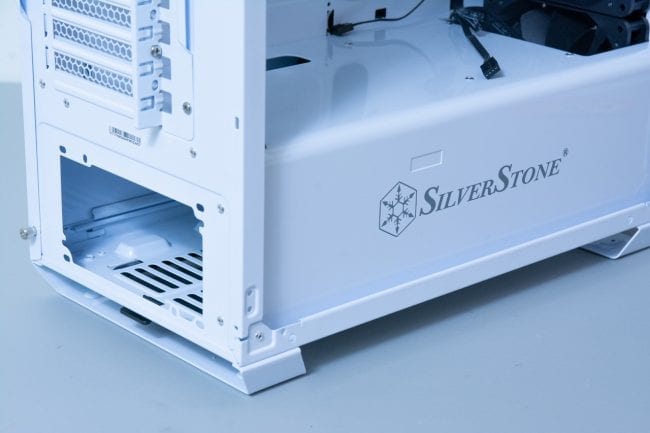 A little close up of the PSU shroud and rear of the case. The SilverStone logo stands out prominently. 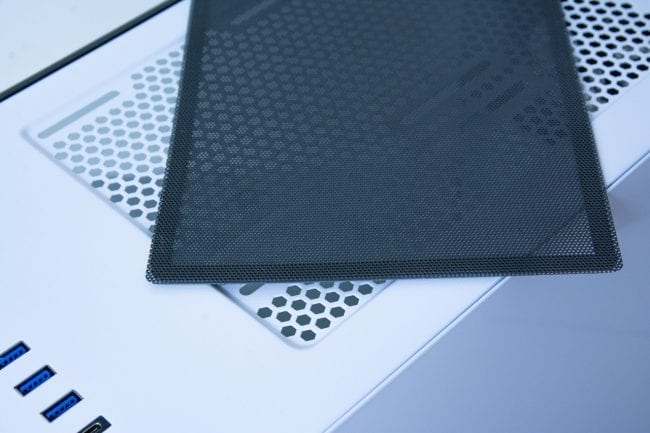 Back up to the top of the case and the included magnetic fan filter is a nice touch. 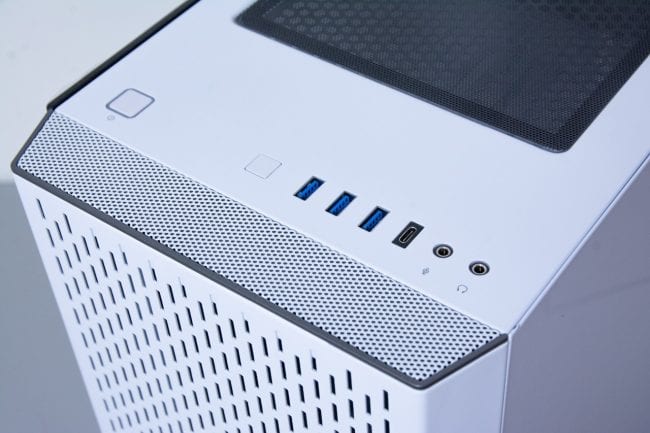 I’m totally into the IO ports of a case, especially the ones that are easily accessible. The SilverStone PM02 offers 3 USB 3.1 A ports with a single USB 3.1 type C port.  Headphone and Microphone jacks. The power button (far left and glows blue) is spaced away from the reset button. The front grill is accented nicely with mesh on top and a neat slotted type pattern on the front

The whole front panel adorns a cool looking slotted design. It allows for air to be sucked in from the three intake fans, but I also think it looks good.