Before we dive into replacing the boring black case, let’s jump into swapping out that stock Intel CPU cooler first with one of (many) SilverStone’s CPU coolers! 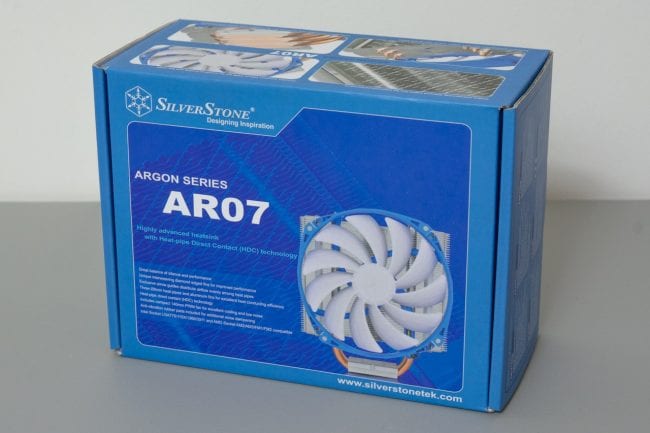 SilverStone offers a variety of CPU cooling products. For refreshing this older build that had the original Intel stock cooler, I looked at making use of an air-cooler and decided on the Argon Series CPU Cooler, primarily the AR07. Their All-In-One (or AIO) water coolers were unable to ship into Canada as that would have made the inside of the case even cleaner. The Argon series of CPU air coolers do look impressive, though, and at first, I thought a 140mm fan would produce a lot of noise.

The AR07 is a CPU cooler compatible with both Intel and AMD sockets in mind. For our build, I needed something that supported the older LGA1155 socket on the Intel i7-3770, and the AR07 is a great fit. The AR07 is a single tower cooler that incorporates three copper heat pipes that feed up to a unique interweaving diamond edge fin design with an attached 140mm fan. 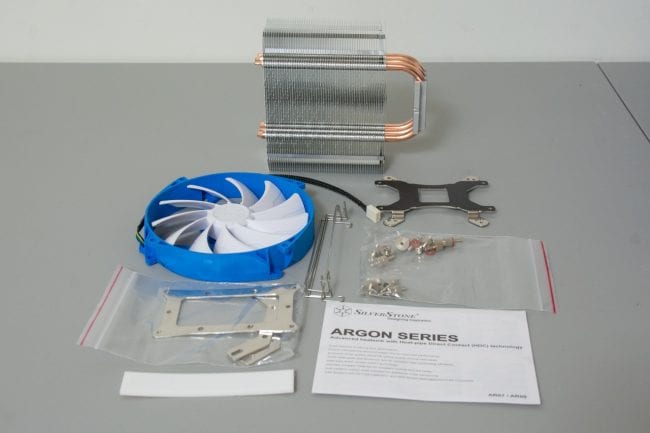 When you open up the box, everything is neatly packed away. The 140mm fan sits on top of the heat sink with the various accessories on either side. You get the screws, socket adapters, fan retaining clips, thermal paste, vibration dampening strips and install manual. Though, it looks like I may have misplaced the included thermal paste and had to go out and buy some ArcticSilver.

Design of the AR07

The SilverStone AR07 is a single tower CPU cooler with three copper heat-pipes that run through aluminum fins. It is a reasonably large cooler and will require a large case to ensure it has enough room to fit. The dimensions with the 140mm fan installed are 75mm (2.95″) x 163mm (6.42″) x 140mm (5.5″), luckily the SilverStone PM02 computer chassis we are also looking at has enough room to fit this.

The three 8mm copper heat pipes help make up what SilverStone calls HDC or Heatpipe Direct Contact. The heat pipes as-is are not enough to fully cover the surface of the CPU, so they have interspersed pieces of aluminum to help create better contact with the CPU. Granted, the aluminum will not conduct heat as well as the copper pipes will.

Installation of the AR07

Installing the Silverstone AR07 is relatively straight-forward. I forgot how much I enjoyed putting computers together and was a bit worried about popping off the stock Intel cooler and putting on the AR07. I had to look at the included manual a couple of times to figure out where the vibration strips and retaining clips went, but overall, it was a sound installation.

With the ASUS Z77-A motherboard and all RAM slots taken up, the fan JUST fit and luckily, there isn’t any strain pushing against the CPU cooler. I was hoping I would not have to orientate the fan in a different direction, and I lucked out that it fit the way I wanted to have it installed. Your mileage will vary, of course, depending on your motherboard’s layout. 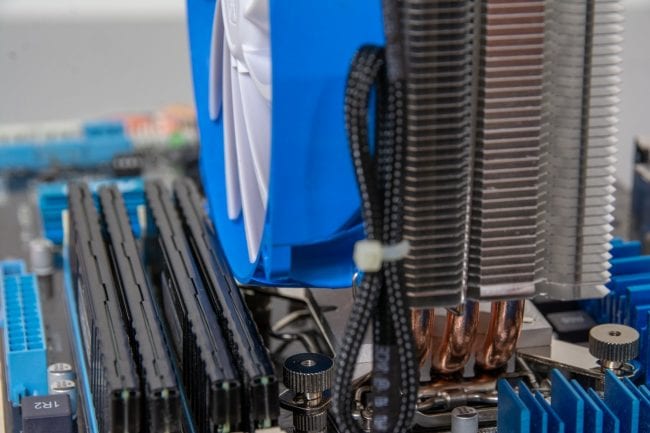 One other item to note, though, there are arrows at the top of the heatsink tower. It tells you the direction that air should travel to utilize the design of the aluminum fins properly. I installed it wrong the first time and had to reinstall it after the motherboard was installed, but it was relatively easy to orientate the proper way with the motherboard still fitted in the case. Your mileage may vary depending on how much room you have to move around in the case.

Performance of the SilverStone Argon AR07

To put the SilverStone Argon Series AR07 to the test, I utilized a couple of benchmark type programs and had MSI Afterburner to show me a graph of the CPU Temperature over time while they were running.  When running Cinebench, the CPU temperature high was 60 Celcius, with the average being around 50 Celcius. The CPU fan never went above 30% and was whisper quiet during the test, even while the CPU was hitting 100% at 4.2GHz.

Next up, I ran Heaven and tweaked it a bit so that the CPU would be used more than the GPU. Temperatures hovered around the 45 Celcius mark with a peak shy of 56 Celcius with the fan not going above 30% and being whisper quiet.

I quickly loaded up Fornite and played a few (horrible) rounds. Granted, the GPU would do most of the workload. The CPU temperature was steady at the 45 Celcius mark with the CPU’s fan never going above 30%.

For the size of the fan and the size of the heatsink, I am pleased with how well the CPU cooler performed and that the fan was never too loud. It’s a shame that this CPU can’t be overclocked as I would have loved to have been able to test how well the Argon AR07 handles overclocking this older CPU.