Search
Home
Reviews
BIOSTAR Hi-Fi Z97Z7 ATX Motherboard Review
As far as affordable Intel motherbords go, the Biostar Hi-Fi Z97Z7 is worth its cost given its features and price.
Pros
Cons
2015-06-12
8Overall Score
Prev2 of 4Next 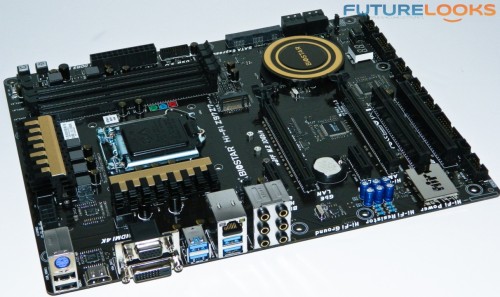 The Biostar Hi-Fi Z97Z7 layout is as logical as possible. It’s nice to see the M.2 slot in a different place not completely blocked off by the video card. Also, all of the sockets are wrapped around the edges of the board for easy access. It’s also a good thing that the audio is implemented separately.

Connectivity includes six USB ports: four USB 3.0 and two USB 2.0. For charging devices, the USB 3.0 (blue) are the ports to use. HDMI, DVI and VGA video out ports make it easy to utilize integrated CPU video. A single Gigabit NIC and PS2 port are also offered. The PS2 is long since antiquated anymore. And, finally, six gold analog ports allow users to sample the Hi-Fi audio. 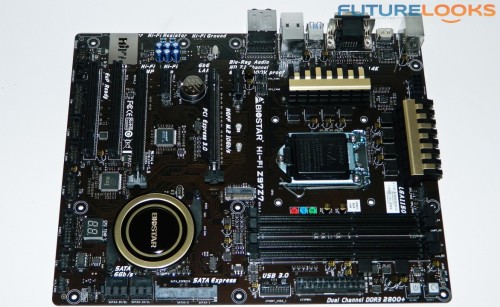 There are a couple things to point out. Four of the fan headers are found in the middle and top half of the board. Only one is found at the bottom which means a splitter is needed. Also, the VRM heat sinks are very close to the CPU socket. Fortunately, the heat sinks are low enough to miss most coolers. However, really large coolers with substantial mounting systems could get tight really quick.

We’ve got some test components to try out while benching the board. Lets get to it!

The motherboard BIOS was flashed to the Z97BF912.BST file. An NVIDIA Graphics driver 344.75 ensures gaming performance is on point. For the latest Intel drivers, visit Biostar’s webpage or Intel for more direct files. 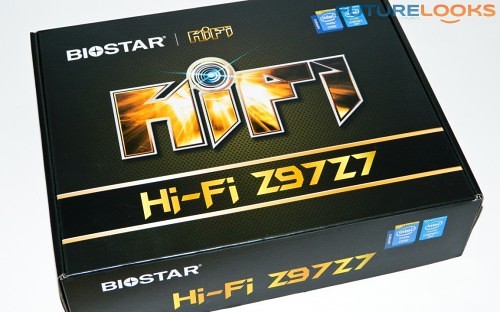 The test system physically was easy to set up. The Biostar Hi-Fi Z97Z7 motherboard boots up similarly in speed to most other Z97 boards. There were a couple issues using the BIOS and included software. The board BIOS froze after hitting the confirmation button to update the launch BIOS. If the update fails, try again. It took a couple tries now and then when repeating the issue. The companies that care always release new BIOS updates and it appears that this issue has been alleviated in newer BIOS updates.

The BIOS is cleanly laid out. Most of the user setup functions are all on the first pages. If you’re prone to giving overclocking a try, the D.N.E. page holds all the functions from CPU configuration, DRAM configuration and Voltage configuration. While enthusiasts typically use the BIOS, there are easier ways like using bundled OC software.