Rocking Out on the Drums 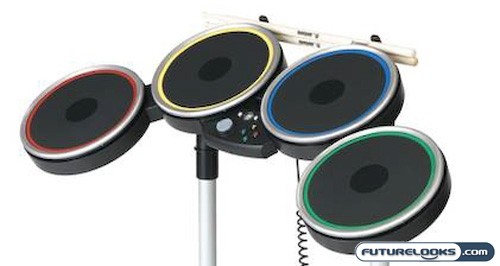 Rock Band 2 largely maintains the status quo, sticking to four pads and a bass pedal. The drum set for Rock Band 2 isn’t as loud as before, but they’re still loud. The velocity-sensitive pads are a nifty trick and the “freestyle” sections leading up to the activation of Overdrive are quite fun. 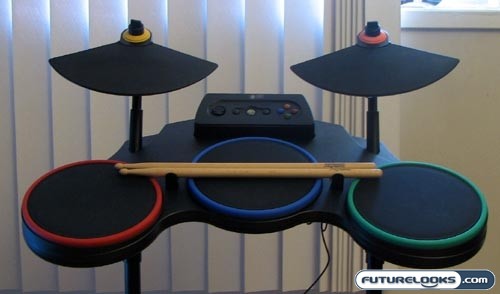 That said, I think Guitar Hero World Tour has more to offer here. Whereas you have to wait for certain moments to activate Overdrive in Rock Band 2, you can activate Star Power at any time by nailing the two cymbals at the same time in GHWT. The very inclusion of cymbals is also a very satisfying, albeit much more confusing, experience. I would have liked the two cymbal streams to look a little different than the three regular pads, but you’ll get used to it. I also found the build quality of the GHWT set and the “softness” of the pads to be much better than the RB2 counterpart.

Guitar Hero, despite its name, is the clear winner on the drums.

Playing with Friends and Groupies

You’ll notice that I skipped over the vocals. While they are presented in a slightly different way in the two games, the experience is virtually identical. The only real difference is, like the drums, you can activate Star Power at any time in Guitar Hero World Tour and not in Rock Band 2. I didn’t feel that the vocals were notable enough to warrant a whole “point” in this comparison, so I’ve melded it into my comparison of the full band experience. 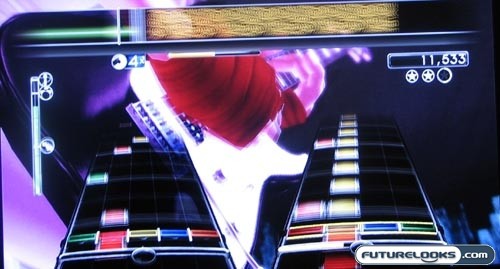 I know I’m starting to sound like a broken record, but the band gameplay in Rock Band 2 has been left largely untouched compared to its predecessor. It’s a system that just works. Each player gets his/her own Overdrive meter and you can get a sense of your overall progress by peeking at the number of stars earned thus far in the song. The large meter on the left is also great for seeing how everyone is doing. The ability to “save” band members is very, very much appreciated too. 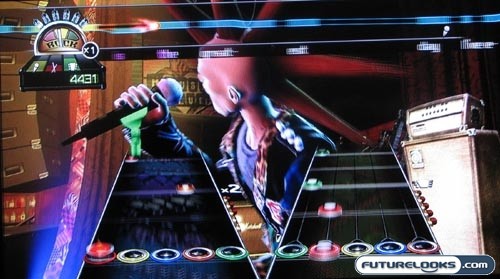 Activision and Neversoft did not do as good a job with Guitar Hero World Tour. While the individual experience is similar to the old Guitar Hero games, the full band just isn’t as well-designed as Rock Band 2. Each band member shares the Star Power lights and, for some strange reason, activation of Star Power doesn’t last until the meter is drained.

Continuing with the poor design of the gameplay screen, you’ll find that the tiny Rock Meter has been tucked away in the far left corner, making it difficult for the players on the drums and guitars to see how everyone is doing. Further still, each individual player’s performance has been reduced to remarkably tiny meters underneath the Rock Meter. This is much worse than the “arrow” style with the gauge in Rock Band 2.

Oh, and you can’t save your band members. If one person fails, the band fails. For all these reasons, the full band mode in Guitar Hero is, you guessed it, a fail. Not an epic fail, but a fail nonetheless.