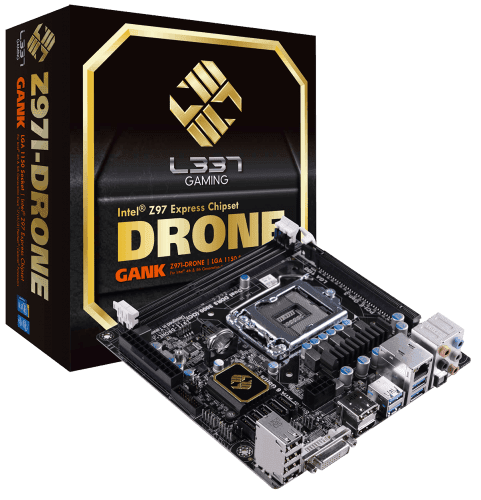 When we met up with the ECS Elitegroup team for a product unveiling in California back in September, we learned that the company was taking steps to try to recapture customers that they lost, when they abruptly changed their focus a few years ago. When ECS was still “Extreme” with their colorful motherboards, their products still weren’t perfect, but they listened intently to what their customers wanted, and improved with each series. And they want you to know they are listening again, with products such as the new ECS Z97I-DRONE Mini-ITX motherboard.

The ECS Z97I-DRONE Mini-ITX is the company’s attempt at a gaming oriented mini motherboard that is perfect for building a small form factor LAN party PC, to a Steambox for the living room. The board is based on Intel’s Z97 chipset, an LGA1150 socket of course (which isn’t exactly placed in the most optimal spot for large heatsink use), and features a single PCIe Gen3 slot for use with the biggest graphics card you can fit in your case. Along with that, the board also features Wi-Fi/Bluetooth, via an M.2 slot (which does not support storage…meh), and memory speeds up to DDR3 3000+. Networking is provided by an Intel L218V Gigabit solution (instead of the more expensive Killer Networks solution), and like other gaming boards on the market, it also features enhanced audio via a Realtek ALC1150 chipset, running Soundblaster Cinema2 audio software enhancements.

In terms of specialized gaming features, the board does offer a “Low-to-Full USB Speed” technology, which increases polling rate of mice and keyboards from 125Hz to 1000Hz. And of course the company’s new L337 Gaming branding, which is a huge step in the right direction, over the “golden disaster” of years past.

For gaming stability, the ECS Z97I-DRONE has a “Hybrid Power” 5-Phase PWM, and Dual Advanced MOSFETS. The board also features Nichicon Japanese Capacitors, and Icy Choke(s), that offer a wider temperature operating range. All these together, give the board some headroom for overclocking, which is usually somewhat hobbled on smaller form factor boards. ECS feels that their boards have just as much quality as products from ASUS and GIGABYTE, because they use the “same quality” of components, as stated in our interview with the management team back in September.

The ECS Z97I-DRONE launches today, and should be hitting retailers soon for just over $100 US, making it one of the most affordable gaming oriented boards on the market.

Is this really a DRONE Attack? Or a bunch of parts put together to make it look like one? We’ll have to get one of these in for a review to make that decision.

Full press release is posted below.

2014/10/09 Taipei, Taiwan— Over 27 years of experience, motherboard leading manufacturer ECS proudly announced that its high-end gaming motherboard series, L337 Gaming, launched the latest Z97I-DRONE to its lineup. With the rise of the Mini ITX gaming market demand, L337 Gaming Z97I-DRONE is the wonderful choice for users from every perspective.

L337 (pronounce as LEET) is derived from ELITE. The L337 alphabet is a specialized form of symbolic writing. The term L337 is used as an adjective to describe formidable prowess or accomplishment, especially in the fields of online gaming. L337 Gaming was created to dedicate efforts in developing products focused on gamers, and Z97I-DRONE is the latest member of L337 Gaming Motherboard. Equipped with Z97 Express Chipset, the Mini ITX form factor Z97I-DRONE provides 2 Dual Channel DDR3 3000+ (OC) Memory up to 16GB, 1 PCI-Express x 16 Gen. 3 Slot, and 1 M.2 Slot for Wi-Fi/Bluetooth device. In addition to enhance the gaming experience, the “Low-to-Full USB Speed” technology is designed for gamers, delivering an optimized 8-time faster keyboard and mouse report rate from 125Hz to 1000Hz, which is a true benefit, especially for FPS gamers. Besides, Z97I-DRONE introduces Intel® I218V Gigabit LAN to provide the outstanding fast LAN networking for gaming and avoid latency.

ECS, the Elitegroup Computer Systems, was established in 1987, and is approaching its 27th year of business. More than two decades, ECS has overcome a great deal of obstacles facing new businesses and has experienced the joy of significant growth and development. Her main focus has expanded to not only motherboards, but also desktop and notebook computers, graphics cards and other mobile products. ECS is strongly committed to develop cutting-edge technology in order to generate innovative products under environmental friendly designs. ECS comprehensive system of quality control provides our clients with reassurance and fosters long term cooperation. Visit http://www.ecs.com.tw to learn more.