Every now and then, we’ll see a really interesting-looking PC enclosure emerge from a company we only have a passing familiarity with. It’s Deepcool’s turn, and their TRISTELLAR S MOD version ITX chassis looks truly out of this world. Want a case that’ll attract eyeballs at your next LAN? This may be it. 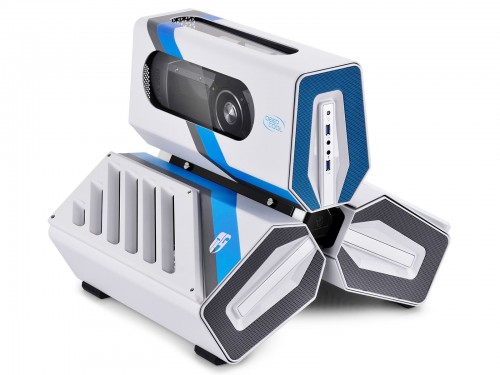 This case actually did take its inspiration from some of this world’s sources. According to the press release we received, “the ultramodern appearance of Tristellar S is based on ‘Star Wars’ & ‘Spaceship’.” And within this vessel, you can truly stuff an incredible amount of hardware.

The Tristellar S has three seperate chambers, all connected to each other at a centre hub. Each chamber houses a specific set of hardware, and cooling for that hardware. The top chamber holds your video card and up to three 2.5″ storage drives (SSDs or laptop drives if you want). The lower left chamber houses the 3.5″ drive cage and power supply, and the lower right chamber holds the MiniITX board.

As for cooling, the motherboard chamber can hold a closed loop water cooling unit with a 120mm radiator. While there are some low height air coolers that you could wedge in there, closed loop water cooling does look to be the best solution. You won’t be wanting for space in the top chamber though, as it can fit a truly huge video card. We’re talking three slots, and 320mm in length.

The suggested MSRP for this case is a whopping $599.99 USD. You can check out the product page for more info, or venture into the press release below.

Beijing, China – September, 2015 – GAMER STORM is a High-end brand of DEEPCOOL, serving gaming enthusiasts with products that have elegant design and great cooling performance. Since DEEPCOOL has launched the first trinity case, TRISTELLAR, that received consentaneous reputation. DEEPCOOL teamed up with Bill Owen, launches a new version of TRISTELLAR, named as TRISTELLAR S.

Deepcool x Bill Owen Mod case, inspired by ‘Star Wars’ & ‘Spaceship’, which is the first cases to take conventional chassis design and throw it out of the window, into the stratosphere, and on to the next galaxy. In fact, the only aspect of the TRISTELLAR S that might rival its stunning aesthetics is the sheer amount of hardware it can hold. From front to back, there are accommodations for a raft of enthusiast-caliber components.

Every ‘mod job’ or ‘build’ is rare and costly, we’ve practically had this belief hard-coded into our DNA. But today the TRISTELLAR S of Deepcool comes along and defies this notion. Globally limited 50 pcs will bring more opportunity and heartbeat.

The ultramodern appearance of Tristellar S is based on ‘Star Wars’ & ‘Spaceship’, which must permanently etch itself into your memory. Moreover, it also can support the latest gaming configuration, the full-length (up to 320mm) graphic cards, and ultra wide (3 PCI Slots) VGA card