Audio cards all have very low system requirements. The Xonar DG requires at minimum a Pentium 4 1.4 Ghz processor or better, 60 MB of free space, 256 MB of RAM, and a free PCI 2.2 slot or better. Our test system consisted of the following components…

The test system we put together clearly provides more than enough resources. We run Windows 7 Pro 64-bit for the OS and our output device today will be a Logitech X-540 5.1 Surround Sound speaker set. When gaming and talking with TeamSpeak I used my Plantronics GameCom 377 Open-ear 3.5mm Circumaural Gaming Headset.

Installation of the ASUS Xonar DG was very simple. You simply line up the card with the PCI slot and it slides right in. Since this card does not have any basic Windows drivers, so you will need to use either the ones on the included driver CD or you should download the latest ones here. 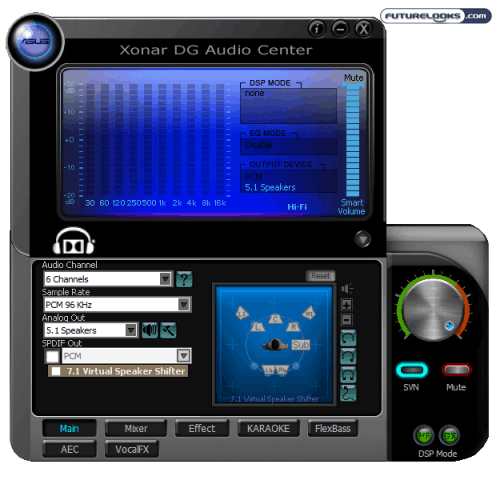 Included with the drivers is the Xonar DG Audio Center and acts as you default audio controls. While both the card and audio center will function immediately, I recommend a quick restart as the automatic front panel detection did not work until I did.

As you may or may not know, all audio in the real world is analog and all computer systems are digital. Thus all audio must be converted from one to the other in real time by your sound processor. I used RightMark Audio Analyzer 6.2.3 to test for distortion, noise, and response times for these conversions. RightMark generates several audio sounds to output to the speakers while simultaneously monitoring the mic. The software then compares the signal sent out and the one received for discrepancies in the signal.

I also used the Xonar DG for several days before the RightMark tests with basic day to day uses such as watching movies, gaming, and playing music. I did this to minimize any bias due to expecting improvement based on test results; however, I want to start with those numbers. 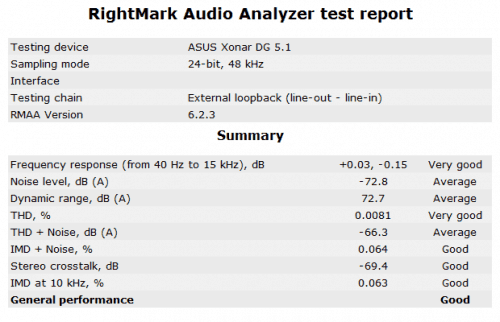 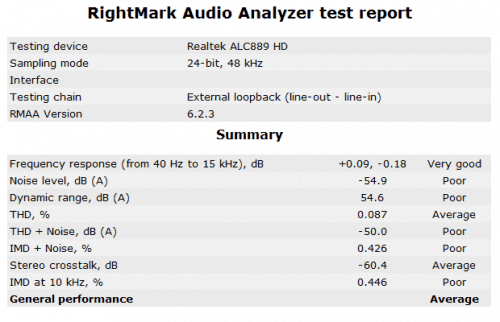 The Xonar DG is clearly a superior audio device when directly compared with the motherboard’s onboard audio. There is a large difference in noise reduction, lower distortion, and improved frequency range. These are the three areas you want to look for improvement when determining if this would be an upgrade for you.

In the Frequency Response test, there is a small difference in the two cards. While it is measurable, it is not a large enough difference to perceive. This is one area where both audio cards perform above average.

Distortion is the most important area of audio processing to me. If you are not hearing the sound you are suppose to hear, it can ruin any experience. The Xonar DG is both a full magnitude lower in Total Harmonic Distortion and averages 9 dBA less Stereo Channel Crosstalk (channel bleed). In games in particular, it helps to know the direction and type of sound that is being made is being produced accurately.

Noise in an audio signal from any audio source is distortion from shifts in volume. Audio noise is often heard when the volume of the audio track is very low; however, it can affect the entire audio track as it affects clarity of the sound. The difference can be like trying to listen to music indoors compared to listening while standing next to a waterfall. Here the Xonar DG produces 17.9 dBA lower noise (like someone whispering in the room just left). Now lets look at real world results.