TurboV EVO is both a hardware and software overclocking software. Next to the DIMM slots is a TurboV chip that essentially monitors the system while using the EVO software to manipulate frequencies, Bus clocks, voltages, and timings. 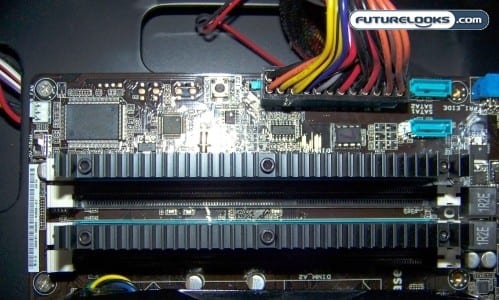 Since some folks aren’t comfortable using the manual EVO settings to overclock, you can use Auto Tuning Mode(s). Fast Tuning automatically goes straight for just overclocking the CPU. Extreme Tuning automatically overclocks the CPU and memory. Once EVO indicates the overclock is stable, you have the option to keep it. Or, if the auto detected overclock just isn’t quite enough, you can use Custom Tuning which allows you to push voltages and frequencies a bit higher manually. This is usually out on the hairy edge of some really extreme overclocking. So, good luck!

Turbo Key is an interesting little software feature that allows you to bind keys for overclocking. Just set your key configurations and you can overclock on the fly when you need it. Just don’t get too carried away, or you’ll crash your system.

This birds eye view gives you a better look at the attractive black and blue theme. At first, I wasn’t too sure about the silver on blue PWM and chipset heat sinks. But, they’ve grown on me. 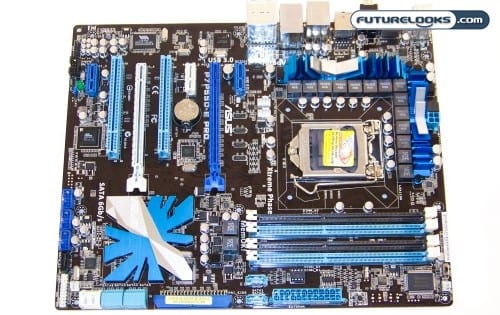 The main things to point out about the layout is that there’s ample CPU socket room for the largest CPU tower coolers available. There’s no capacitors or heat sinks close enough to interfere. If you can find a massive towering cooler that you like it’ll fit.

The PCI and PCIe slots are all arranged in a nice configuration based on realistic use. Having the extra space between the video cards also equates to better air flow which extends the life of any electronic component.

Some of the industry standard features include horizontal SATA and UDMA ports. That way cables run off the side of the board and don’t conflict with video cards. Even the two extra SATA ports by the DIMM slots are at least in a location that won’t interfere with anything. 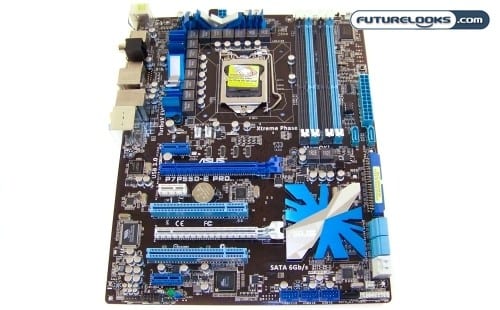 What we do miss is on this board are power and reset buttons. They work good for us for testing or for gamers who happen to have an exposed gaming system. Sometimes it’s nice to not have to worry about the front panel wiring. But, again, these aren’t always a necessary feature. You at least have the ASUS Q-Connector which allows you to pre-populate a dummy plug so you don’t have to squeeze your fingers inside and bend pins.

Not one issue popped up during installation. And, I have no complaints about how the motherboard interacts with all the components. It even loved the Corsair Dominator 1600MHz CAS 8 memory running at CAS 7. We call this a win!

Since Intel processors officially support 1333MHz DDR3 memory, we felt it a good idea to match that frequency when testing CPUs or motherboards. We’re also performed testing with Intel Turbo Tech enabled because it is a feature built in to the CPU and is fully supported by the motherboards. However, this was disabled during overclocking to ensure stability.

All testing was done under Windows 7 Ultimate x64 with all the latest updates. Our benchmarks will include: Benchmarks: PCMark Vantage, SANDRA CPU, 3DMark Vantage, Cinebench R11.5, Crysis, Heaven Demo, and RightMark Audio. Let’s get to it.