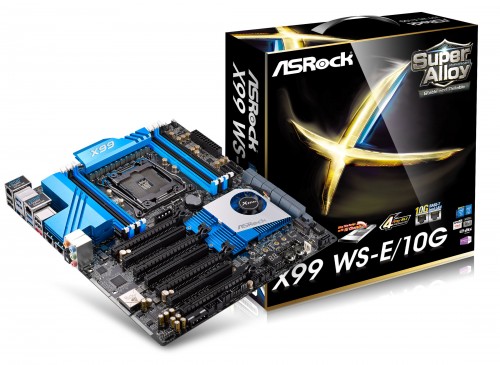 When it comes to doing things on the extreme side, when it comes to motherboards, you only have to look at ASRock for guidance. It’s a niche they have done quite well, forging a path for themselves between the other big brands. Yes, they are the ones that made the board with over 20 SAS/SATA ports. Today, they let us know about their latest ASRock X99 WS-E/10G, which boasts extreme speed on the networking side, incorporating a pair of Dual Intel 10G BASE-T LAN ports, powered by an X540 Ethernet Controller Chip.

The ASRock X99 WS-E/10G is a sort of hybrid enthusiast/workstation board, very similar to the idea that EVGA had with the SR series. The board is based on the Intel X99 chipset, and supports LGA2011-3 socketed CPUs, from 18 core 160W Xeon® E5-1600/2600 v3 processors to unlocked Intel® CoreTM i7 CPUs. In addition to the aforementioned Dual Intel 10G BASE-T LAN ports, the board also has a pair of Intel I210AT Ethernet Controller Chips, powering another pair of gigabit ethernet ports. Teaming all of them together, you could push up to 22 Gbps of bandwidth, according to the ASRock marketing stuff. You can see it in action below:

While the board does seem setup more as a workstation or server board, with the ability to squeeze into a 1U chassis with ease, it still supports a number of enthusiast class features including 4-Way SLI/CrossFire with all four slots at 16X. This is accomplished with the addition of two more PLX PEX 8747 bridge chips, for no lack of bandwidth when all slots are populated. The board also sports 8 DDR4 slots with up to 3200+ MHz OC support, and up to 128GBs in memory capacity. A 12 power phase Super Alloy PWM design might even allow some decent overclocking headroom.

The retail price of the ASRock X99 WS-E/10G has not been set, but we expect that it’ll probably be at least a $700 – 800 investment, given the cost of 10G Base-T adapters on the market, and it has two of them. Then you have to shell out some more cash to upgrade your networking equipment to take advantage of its networking potential.

The full press release is posted below.

TAIPEI, Taiwan, November 24, 2014 – Stop waiting. If you are unsatisfied with your internet bandwidth but at the same time reluctant to succumb to those malevolent internet providers, now is the time for a major hardware upgrade! ASRock’s latest X99 WS-E/10G is a motherboard, workstation board hybrid that boasts Dual Intel® 10G BASE-T LAN ports powered by an Intel® X540 Ethernet controller chip, plus Dual Intel® gigabit LAN ports powered by two Intel® I210AT Ethernet controller chips. Add in the fact that users may use Teaming to combine all four connections into a single one with a gigantic 22Gbps bandwidth!

What makes ASRock X99 WS-E/10G so fast is the onboard Intel® X540 Ethernet controller. This single chip is capable of supporting dual 10G BASE-T LAN ports, which are ten times faster than your ordinary gigabit LAN and usually only seen on server boards. Purposely, this motherboard also supports Windows server operating systems, thus it may also be used to build a small server or workstation.

Aside from the two 10G BASE-T LAN ports, there are two more Intel® gigabit LAN ports each supported by an Intel® I210AT Ethernet controller, and best of all, support for quad LAN Teaming. By running IxChariot to test our quad LAN setup’s internet bandwidth, we’ve reached a mind blowing 20360 Mb/s!

As usual, to support 4-Way SLI or CrossFireX, especially if you wish to have all four of your graphics cards running at x16/16/16/16 mode, adequate PCIe bandwidth is required. That’s where the two additional PLX PEX 8747 bridge chips come in handy.

The Most Luxurious 12 Power Phase Design

While other brands are trying to reduce costs by using less and less power phases on their X99 motherboards, ASRock X99 WS-E/10G adopts an uncompromisable 12 power phase design just like the rest of ASRock’s X99 Super Alloy Series. This ensures that the motherboard is more performance/power efficient and operates at cooler temperatures compared to its adversaries.

Casual PC or server workstation, you decide. The back of ASRock X99 WS-E/10G is mounted with ultra short screws, and the length of the CPU back plate is less than 3mm! Again, this special design is for people who tend to install this motherboard into a 1U server chassis.

ASRock X99 WS-E/10G is a crossover between a hardware enthusiast motherboard and a workstation. Identical to other ASRock X99 Super Alloy motherboards, it supports LGA 2011-3 CPUs ranging from 18 core 160W Xeon® E5-1600/2600 v3 processors to unlocked Intel® CoreTM i7 CPUs. Same as the rest of the X99 motherboards, it has eight DDR4 memory slots that support quad channel ECC technology, UDIMM/RDIMM memory modules up to 3200+(OC) and a maximum of 128GB capacity. On the other hand, the storage options are about as good as X99 Extreme11. Users may find 12 SATA3 ports, 1 SATA Express 10Gb/s connector, 1 PCIe Gen2 x4 M.2 slot, a SATA DOM and a USB DOM.

For detailed information about this motherboard, please click here.