Cases are one of the rare computer components where no matter what the thermal performance or noise levels of a system are, if one love the way it looks, there’s no tearing you away from your chassis. You’ll figure out a way to make it work. That being said, we should probably make sure that this case won’t roast your components to a crisp. 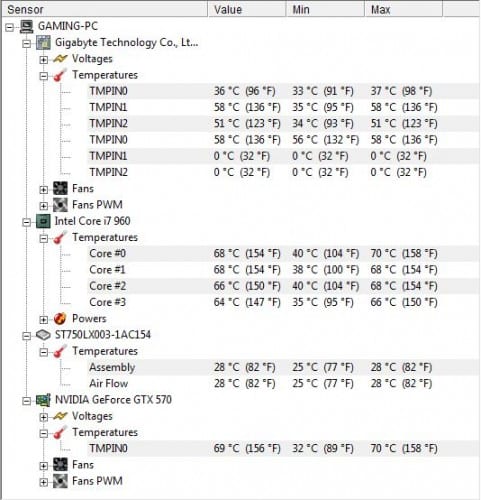 Stock thermal performance of this chassis is reasonable, but not brilliant out of the box. Particularly when you consider that we are only using one single cooling fan at the front of the case. Using Furmark to do a full load on the GPU and OCCT to fully load the CPU down, we proceeded to torture the system until we noticed that temperatures stopped rising. This took roughly 20 – 30 minutes and then we waited another 10 minutes just to make sure this was it (Max).  Keep in mind, this is an absolute worst case scenario, but it seems the case can definitely handle it.

We’d still recommend an extra fan in front if you start adding hard drives and another one on the door if you choose to go with a multi-GPU setup. Idle temperatures were good as well (Min). 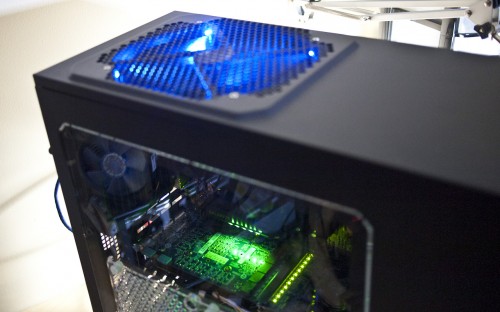 The Antec Eleven Hundred isn’t a noisy case. But because of the way it is designed, with lots of holes and ventilation, it doesn’t do a whole lot to keep your components super quiet either. We took measurements using our noise level meter and found that between idle and load, the noise levels deviated by no more than 3 dB when measured about 1 foot away from the middle of the side panel. Both the front and top panel only increased noise levels by 2 dB. Clearly, the case doesn’t do much to insulate  you from sound.

Just for fun, we pulled the the side panel off and measured at idle and at load again. We got no more than a 0.5 dB change in noise levels at idle with the door off compared to with it on and only 1.0 dB or less at load. If you start adding side panel fans, front panel fans, and internal fans (two more can mount on the back of the drive cages for additional air flow) you can see how this case can quickly become a little jet engine. We did do a little experiment where we covered up the fan mounting areas on both the plexiglass side window and on the rear of the motherboard tray with some basic foam cut outs. Surprisingly, we got a small, but noticeable drop in noise. While I don’t expect Antec to do this on their own, I did think it was interesting just how much noise leaked out through these areas. 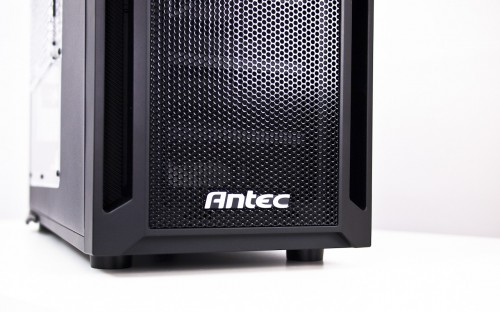 The Antec Eleven Hundred is a win for the company in many ways. It’s the first case that we’ve seen in quite some time that is truly new for Antec. It’s not using the P18x bones like so many of its Performance Series and it’s not another recycled Antec 900 or 1200 like the Dark Fleet Series. It’s truly its own brand new design with its own personality and quirks. It’s also not just another proof of concept or statement case like the Skeleton or Lanboy Air that people love or hate. I do appreciate when a company reaches outside the box, however, you have to have some cases that are solid before heading out into the unknown.

While I can heap a bunch of praise on Antec for coming up with the Eleven Hundred, I can also say that it was about time. They needed this case and the P280 to show the PC enthusiasts out there that they weren’t turning into that company that made cases for “your dad”. This is where companies like NZXT, Cooler Master with CM Storm and Corsair are eating them for breakfast with a fresh definition of what the new standards of case design should be. The Eleven Hundred does catch up in a lot of respects, but it is still in need of some refinement to get it even keel with its biggest competitors.

At $129 MSRP, it does set itself apart by being a case that gives you XL-ATX motherboard support for multi-GPU setups, 9 expansion slots, a plexiglass side window with room for two optional 120mm fans, easily removable fan filters, and a fan bus at this price point. It’s also very well finished, black inside and out, and has such good cable management that it can be tidied up without a single zip tie (which are even included in the box). But it’s what is missing at this price point that hurts it.

Liquid cooling support on the Eleven Hundred is very basic. With the exception of entry level 120mm radiator based coolers, there is no hope of installing a 240mm or larger radiator inside. Speaking of cooling, Antec has not included enough fans to support a modest gaming system out of the box. One fan in the back is not enough, but we did find an extra front fan to be sufficient for a non overclocked system with a single GPU. I truly hope that Antec considers placing an extra fan in the box. These two points alone put it in shark infested territory with cases that are no more than $10 – 20 more.

There’s one more factor that should be weighed though and that’s cosmetics. The Eleven Hundred is tasteful and understated. It’s not over the top but it’s not so boring that it’ll put the guy next to you at a LAN party to sleep. Most importantly, it’s not so far away from its roots that it doesn’t look like it came from Antec. It looks like it’s here to get the job done and I think that for the most part, it does the job well. Especially with a full armament of your best parts and a high end air cooler inside.

At the $129 price point, it definitely has its work cut out for it against other cases right in this price range. But I think the overall combination of features does work, particularly if you are concentrating specifically on building a solid air cooled gaming rig and want something that has that “sleeper look” holding your Quad SLI gaming rig inside.