Building with the components we listed allowed us to find areas where some installation issues may arise with the Antec Eleven Hundred. 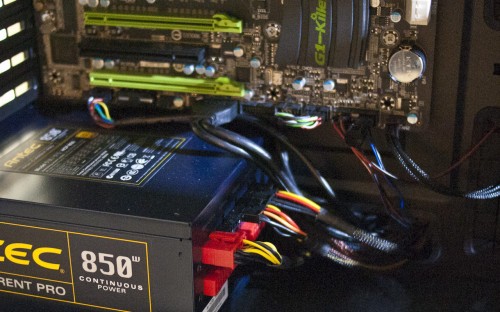 One of the unique selling points of this chassis is the XL-ATX motherboard support. XL-ATX boards are built longer to hold more video cards and some also provide extra four pin MOLEX power connectors to supply more power to the PCI Express slots when they are all fully loaded. One of the issues we ran into when installing this board was that the lower four pin MOLEX connector was blocked by the power supply and there was no way to connect a conventional four pin connector to it on our G1.Killer Assassin.

There is SOME space between the board and the power supply so if you plan ahead, you may be able to purchase a 90 degree extension that may be able to fit into this space. We weren’t able to locate such a component at our local computer store so unfortunately, we weren’t able to check fitment. We estimate that another 2 CM might have been enough for the cable to plug in and make the turn over top of the power supply. If you’re using a regular ATX board, then this should not be an issue, but we were disappointed at this compatibility issue which takes one of the most popular XL-ATX boards out of the running if you want to fill up all four slots with GPUs. You should be fine with dual or single configurations or any XL-ATX board that has that connector mounted differently. 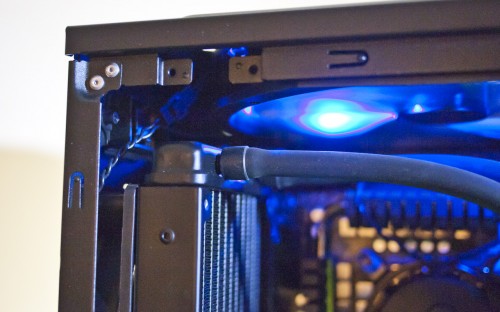 The other unique selling point of this case is the fan bus connectors at the top of the chassis. This allows you to connect all of your chassis fans to one area without making a mess of your board having to snake fan cables across it. It’s powered by a single MOLEX connector. It’s a great feature in theory, but without proper planning you can see some potential FAIL from the picture above. Yes, the 120mm fan and radiator assembly of our Antec H20 620 liquid cooling system has completely blocked access to the  four connectors.

We did try test fitting the large Noctua NH-D14 as well, and was presented with the same issue for fitment. We did try using the smaller NZXT Havik 120 that recently launched but unless you have really tiny fingers, it’s still fairly tedious. If you’re going to use the fan bus, we recommend that you route all your 3 or 4 pin fan cables to it first before mounting your CPU cooler. This seemed to do the trick, but keep in mind that changing any of the fans out will require you to remove your CPU cooler first for best access. If Antec could figure out a way to mount it on the back of the motherboard tray, it would not only facilitate cable management, but would eliminate the issue totally.

Referring to the picture above, we also couldn’t understand why there was a gap in the case with a hole on either side above the radiator. Our only guess was that this was a locking mechanism that was left out of production. Considering that this is aimed at gamers, and gamers do love LAN parties, it might have been a good idea to include a lock loop so that the door could be secured. 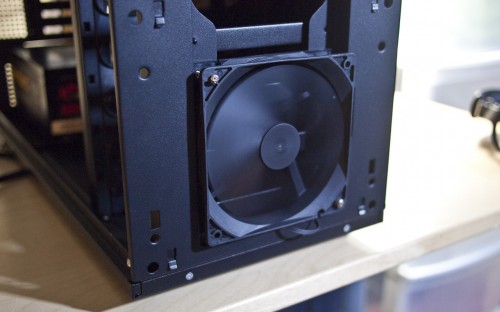 Antec only includes a top mounted 200mm LED fan and a 120mm rear fan at the top of the case for cooling and ventilation. If you want to build any high performance gaming system, you will need to pick up another fan at the very least to go in the front of the case. Because we were using Antec’s own H20 cooling system, we decided to recycle the fan from the back when we removed it to install the water cooler. Unfortunately, that won’t work because the power cable for the fan is only just long enough to reach the fan bus at the top of the case. It’s maybe 3 inches long.

Our solution was to attach a 3 pin fan cable extension to the short cable to extend it long enough to reach one of the motherboard fan headers. It was a couple dollars for this cable, but some of the sleeved ones can be quite expensive at $6 – 8 bucks. Unfortunately, this cable was not long enough for us to reinstall the fan into the fan bus. Another solution brought to our attention was to perhaps swap fans with the one on the H20 cooler, but often times, the static pressure of the fans used for radiators is much higher so we would refrain from doing that to avoid reducing performance.

So altogether, we had to spend an additional $2 for a cable to recycle the included fan when using a basic H20 cooling system, or we’d have to add an additional fan for at least $10 if we choose to go with a decent air cooler. We feel that Antec should have included a basic number of fans to provide adequate stock cooling and included an extension to make the other fan usable. 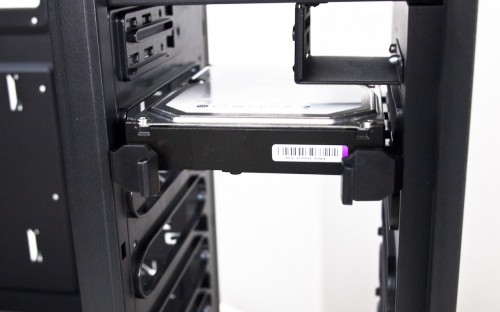 On the bright side, I really liked how the hard drive installation worked on the Eleven Hundred. The included drive rails provided a good amount of tension and once the drive was snapped in place, developed very little wiggle. The same can be said for optical drive installation. Testing with a Samsung Blu-ray drive in our parts bin, we were able to install one in record time, but make sure you keep an eye on the force required to push the optical drive in. We almost lost it into the motherboard installation area. Removing it was no issue at all with the latch mechanism. It’s a lot more secure than the push button system or twist and lock system used by other case manufacturers.

Cable Management and Tidying Up 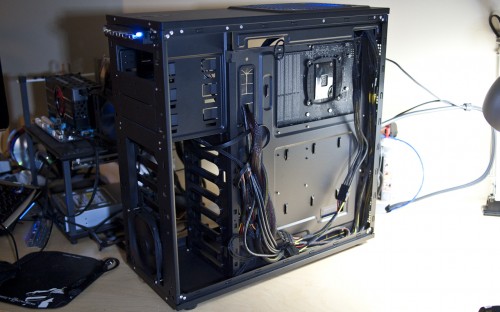 Anyone, even a novice, should be able to build a system in this case cleanly and shove the mess behind the back door where it belongs. The best part is that there is still plenty of room for additional cables for extra hard drives and GPUs. With the right components and some prep, a system should be easily assembled in less than 30 minutes with the Antec Eleven Hundred and still look like you spent another thirty doing cable management.

Now that we’ve got a system built inside, let’s talk about noise levels, thermal performance, tie up some loose ends, and take it home!