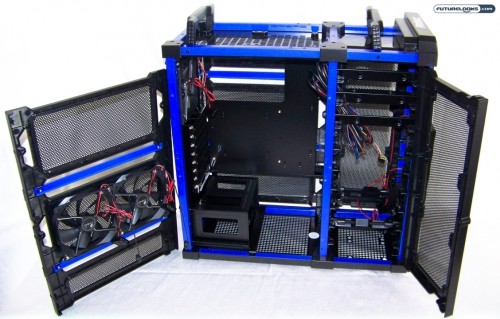 We’re still using our proven semi-nuclear powered AMD Phenom II system with the retail AMD cooling fan. It’s been used in countless other reviews on Futurelooks where thermal dynamics performance was tested. Here is the break down of what will be riding inside the LanBoy Air for this evaluation.

The cases cooling fans were plugged directly into the matching PSU cables. No special fan controllers or wire adapters were used to ensure that it’s all about the LanBoy Air when it comes to cooling performance. Let’s look at some of the installation notes that we’ve made on the LanBoy Air next. 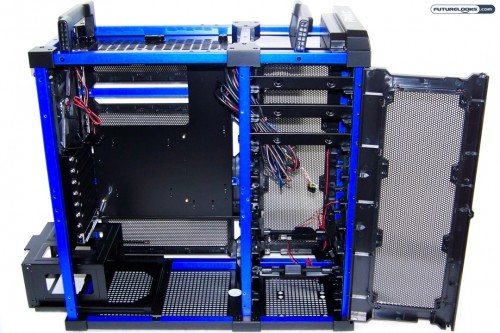 Overall impression is that it really helps that so many of the panels are removable. It eliminates most of the obstacles any full sized or larger hands might encounter. However, the motherboard tray is a bit too flexible which makes the video card PCI bracket look as though it won’t line up. Since the tray flexes so much, it doesn’t take much to orient it properly though. Just make sure your video card isn’t being pulled out and you’ll be fine. In terms of the video card installation(s), there is ample space between the case’s extra side panel fans and the largest of our video cards, including the monstrous old skool 8800 ULTRA.

Large power supplies like Antec’s Quattro TPQ-1200 will quickly fill up the PSU bay. ANTEC includes an interesting mounting mechanism that allows slightly outboard mounting of longer PSUs while mainting interior space. With a little dexterity and the extra space behind the motherboard tray, power cables from this area are quickly organized. As mentioned in the video, the LanBoy Air does not support ANTEC’s CP series power supplies, which may upset some die hard ANTEC users that have invested in them.

Mounting the hard drives on the HDD bungee cords is actually both simple and a unique. Being suspended and flexible completely removed any and all vibrations. And, while system integrators might be a little nervous about using them, they do not fall off. Keep in mind that mounting the mini-panel fans will take up some HDD space and you may need to re-orient the direction your drive faces in order to accommodate all the drives to work with them. This is also the case if mounting longer GPUs as things may need to be moved around or removed to accomodate all your parts. Luckily, the modular design is conducive to customization. 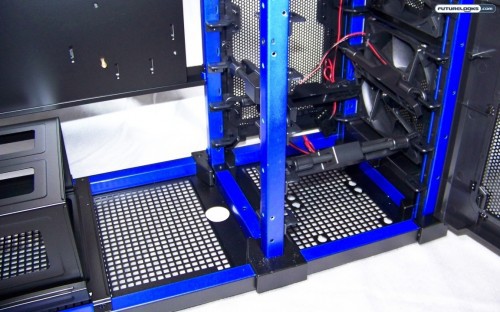 Water cooling is a different story. Being able to mount a radiator or fans in the top of the chassis is going to depend on the motherboard you are using. Because the chassis isn’t very tall, the radiator or fans will sit down over the motherboard. Taller VRM/PWM heat sinks can and usually do pose a problem. Many boards also have DIMM slots that sit closer to the edge which means further conflicts in set up. The slimmer the radiator and fans, the better chance of success. Otherwise, I would recommend a fully contained system like one of Antec’s Kuhler H20 units or the CORSAIR H70 which shares a common pedigree. 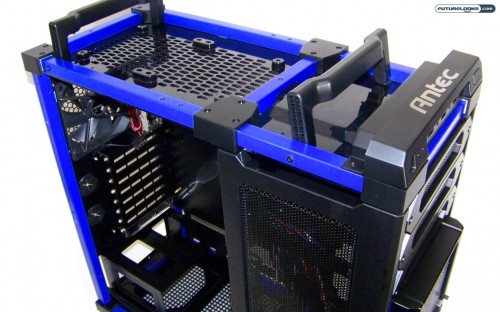 Because the LanBoy Air is so open and easily ventilated, we have a hunch that cooling is not going to be a problem. On the other hand though, designers don’t design cases to channel air with shrouds and panels for nothing. The clumsy special-forces-super-ninja-3D-gamer standing next to the system may be a bigger problem. His choices of sugary caffeine drinks may pose an even bigger problem still, due to the amount of mesh in the case. The test system we’re using is the worst case system scenario because it gets loud and hot if poorly cooled so we are definitely going to give this system a run for its money.

With that in mind, we have average temperatures recorded from having the system stowed in a Raidmax generic case with a single cooling fan. We will compare those temps to the LanBoy Air system with the fans off to give us a baseline and the fans on to reveal any active cooling benefits. At the same time, we’ll be monitoring system noise using a noise level meter, and recording those to see if the extra exposure to the elements will create any annoying effects.