A Quick Peek at the CPU 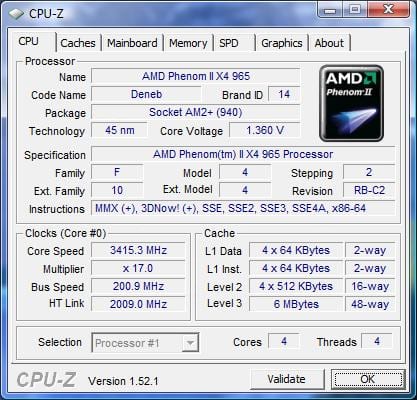 Prior to running the benchmarks and trying to overclock the AMD Phenom II X4 965 Black Edition CPU, I decided to get an idea of what specifications this CPU actually has while running stock settings. Most everything shows up as expected from this processor, with one notable difference. The core voltage, the voltage at which the CPU runs, is well under spec. The Phenom II 965 is rated to run at 1.40V on the core, and CPU-Z is detecting it running at 1.36V. This could simply be some voltage drop from our test motherboard, and means that either something is odd or we’re going to have a lot of voltage headroom to overclock this CPU.

I decided to start the benchmarks off with SiSoftware SANDRA. This program features a series of stress tests and benchmarks that can be used to determine if a component is functional and how well it performs. Since we’re testing processors, I focused on tests that stress that component exclusively. 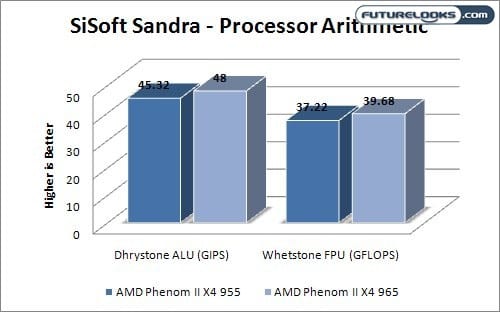 In the Processor Arithmetic test, the Phenom II 965 was 6% faster then the 955 in both the Dhrystone and Whetstone scores posted. This scales perfectly with the 6% speed increase given to the 965. 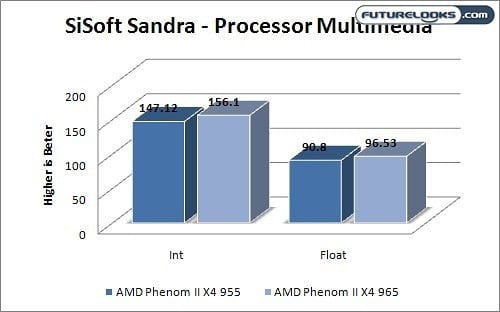 When I moved to the Processor Multimedia tests in SANDRA, I found the same trend continued. A total of 6% separated the numbers posted by the 955 from the the numbers posted by the 965. This is good news. It does indicate that the 965 scales properly in raw performance. However I’d still like to see more real world scenario in which we can judge the value of the 965.

Before moving onto some rendering tests and one quick foray into gaming, I figured we should take a run through PCMark Vantage. This benchmarking suite tries to replicate real world usage patterns and applications using a series of preset scripts. You can run any number of the scripts, or all of them, and it’ll take you any number of hours to complete all the tests.

For test purposes I stuck with the main test, plus the TV and Movies and Productivity tests. As I’m sure you’ve figured out, these two suites test multimedia and office based applications respectively. 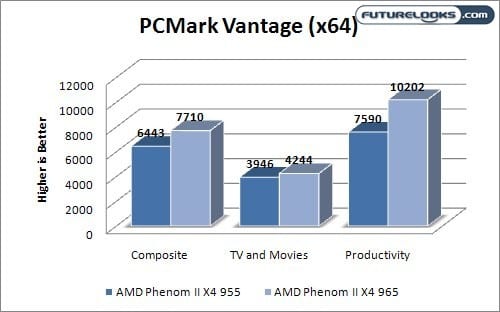 Surprisingly the 965 performed 16% better then the 955 in overall scoring. The TV and Movies score was 8% higher for the 965. Looking the Productivity score I start to understand the performance gap on overall scoring. This test showed a whopping 25% performance increase for the 965. I’m don’t know whether to believe it or not, as everything in my test rig is the same except for the CPU, which was simply swapped. Still the results were reproducible, so either its a bug or the CPU (which is the same core with just 200MHz of extra speed) is really that good in office apps. Hopefully the rendering tests are a little more consistent (and conclusive).