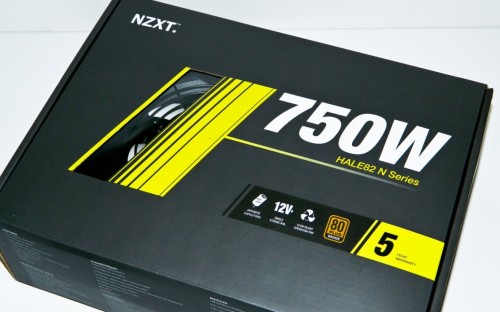 NZXT first launched their HALE series of power supply units (PSU) in support of the 80Plus movement which is all about power efficiency. They original series was constructed with modular cabling, came in white, and used a DC to DC Seasonic internal design. Then they launched a new HALE82 series at CES 2012 which was less expensive than the 80Plus Gold HALE90s. At COMPUTEX 2012 this year, the HALE N series brings costs down further. This series isn’t modular and doesn’t use DC to DC, but still follows similar internal design. The goal of this new series was to give users an even more cost effective, high efficiency, option. Naturally, we wanted to know if The NZXT HALE82N 750 Power Supply still provides great performance at a lower cost. Let’s find out! 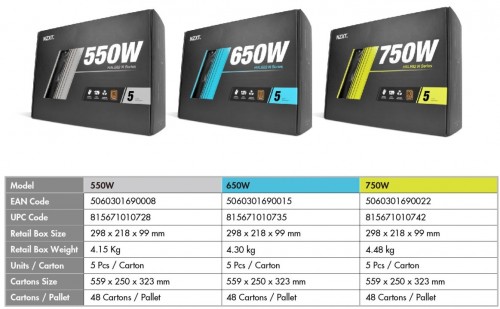 There a few features that are standard across all products in the family. The HALE82N 750 appears to offer the bulk of them especially when it comes to the fantastic new warranty that NZXT has devised. Here’s an easy break down list of all the important stuff.

The important features are all provided such as voltage protection, updated energy standards, proper USB charging support, and the use of Japanese capacitors. The HALE82 N 750 is almost identical to the 650 version as is with the case amongst many designs. Often, just the main capacitor(s) and couple supporting MOSFETs are updated to increase overall peformance.

As mentioned, the HALE82 series of power supplies has a new warranty process that NZXT is very proud of called “Less Than Three”. If your power supply breaks, just head to their site, complete three easy steps, and NZXT will ship you a new power supply to replace your old one in less than three days. You can either ship it back to them to test and replace, or you can just do a cross ship with Credit Card. Either way, they will provide you with a shipping label so you aren’t fronting the costs of replacement. The thinking is that if they make the service great, fast, and do everything they can to reduce your down time, you’ll return to NZXT the next time you want a power supply. 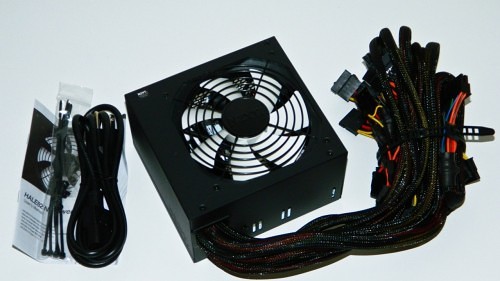 The NZXT HALE82N 750W comes to us with the essential including mounting screws, a power cable, instruction manual, and of course, the power supply itself. You also get some additional twist ties that aid in cable management. Initially surprised by this, I was reminded by the large bundle of cables that this was indeed a non-modular power supply. They are definitely a nice touch and it shows that someone at NZXT really did use these products and thought about the end user experience.

Right out of the box, I noticed right that the HALE82N 750 is comparatively small when measured against other power supplies. It’s 5.875 inches by 5.5 inches by 3.375 inches tall. Basically, it’s not much wider than the internal white fan blade of the 120mm Yate Loon fan. This should make it a great choice for micro-ATX or mini-ITX computer cases. Speaking of the fan, it’s rated to about 100 CFM at 3000 RPMs creating 47 dB max fan noise. However, it’s rare for fans to reach max speed on non-DC/DC units especially if the units have plenty of heat sinks inside.

The HALE N series uses standard gauge hardwired cables with typical nylon mesh with rubber boots at each connector to prevent slipping. Sadly, the unit is rather bland except for the white fan blades which no one can typically see during operation or when inside your case. If it were not for the NZXT spec sticker, one would have to lean in close to see who’s making the power, otherwise they’re left guessing. It’s not going to turn heads or fit any custom mod builds (without modding) by any means, but it is targeted at value conscious users. Additional features add additional cost. 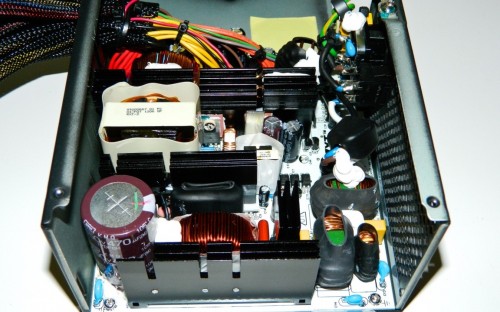 The PSU opens easily (after defeating warranty stickers) and reveals a few initials on some of the components which tells us this unit was fabricated in the FSP Group (Fortron) factory. For those that don’t know, FSP makes very good server grade power supplies which I’ve seen easily last twice their life span. Naturally, ATX power supplies aren’t a problem for their engineers either. This brings us to a pro and con with DC to DC units.

Current DC/DC PSUs are only able to offer 25 Amps on the +3.3V and +5V rails. While the HALE82 N 750 power plant is not DC to DC, it’s capable of offering 30 Amps for each rail which is good for users with lots of hard drives. I’ve heard from some users first hand that have had boot issues from their 80Plus DC/DC PSU because there wasn’t enough power for six hard drives. That shouldn’t be a problem here. 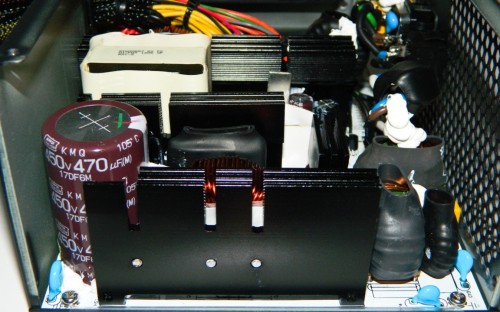 The main power capacitor is a Nippon ChemicCon (NCC) 450V 470uF. It’s rated to 105C max operating temperature which Nippon can typically handle without issue. For example, Nippon are often used in rather large, hot power hungry televisions. You can also see the white (cream) PCB used to construct the unit. There really aren’t a great deal many components inside so it explains the PSU’s rather compact footprint.