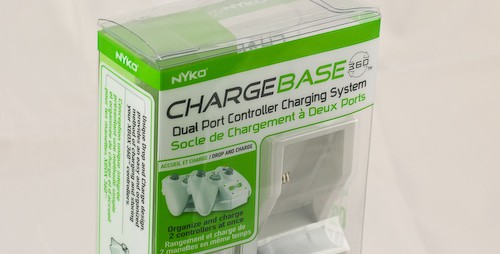 There’s nothing that sucks more than sitting down for a night of gaming action on the Xbox 360, only to find that one, or both, your controllers are dead. Of course, you can dig out the AA battery surrogate packs that are included with the controllers, but mother nature would have a hairy conniption at the waste that you’ve laid with all the discarded cells. Of course, Microsoft makes their own rechargeable batteries and charger, but are there any good alternatives out there to the expensive OEM version? NYKO seems to think they’ve got one.

The NYKO Charge Base 360 offers up charging to two seperate controllers. It also gives you a nifty place to toss your controllers after you’re done with them. It’s better than flopping on your couch and falling right on top of them, necessitating a trip to the chiropractor. 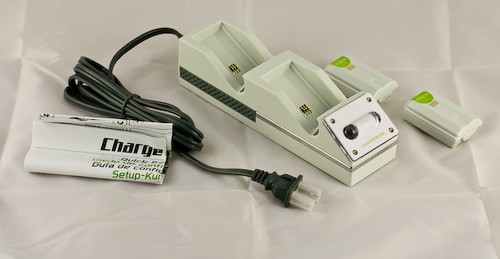 Inside the box, you get everything you need to retrofit two Xbox 360 Controllers for drop and charge action on the Charge Base 360. This inlcudes the Charge Base 360 itself and two additional rechargeable NiMH battery packs. A quick setup guide with lots of pictures is included if you need a bit of help. 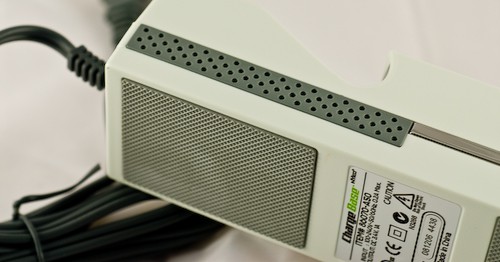 The base itself is very well contructed and features non slip feet so it doesn’t go flying. Even without the controllers onboard, the unit seems like it carries enough weight to keep it planted. Vent holes are present in the unit to keep it from overheating when charging up your controllers. The plug is not detachable so if the cat chews through it, you’re buying a new one.

Retrofitting your Xbox 360 controllers to work with the Charge Base 360 is pretty straight forward. All you need to go is replace the original batteries with the ones provided by NYKO. Don’t forget to peel off the protective stickers or they won’t work or charge. On the bottom of each battery, you will notice some gold connectors that allow the batteries to charge when docked in the Charge Base 360. NYKO recommends that you don’t place the controllers in liquid after the retrofit as bad things may happen. That means if you spill your Red Bull or your Beer, you should clean it up right away before putting the controllers down. The quick setup guide also mentions keeping the contacts clear of oil and sweat. I guess you’ll have to crank the AC and stop eating the KFC bare handed. 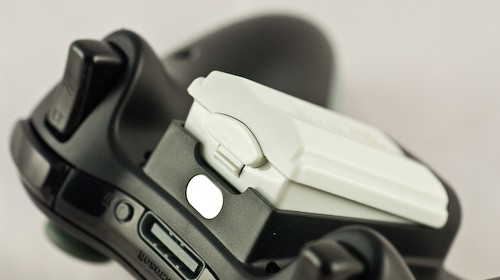 The battery packs are generally of high quality construction and didn’t seem cheaply made like a lot of knock off stuff on the market. Unfortunately, they didn’t quite fit as well as OEM batteries when doing the initial retrofit. You sort of have to give them a bit of a shove while the OEM ones simply slide in without much fuss. Not a big deal, but just something I noticed. Also, if you’re pimping the Xbox 360 ELITE, the Charge Base 360 currently does not come in black so you’ll have a bit of that Panda 360 action going on.