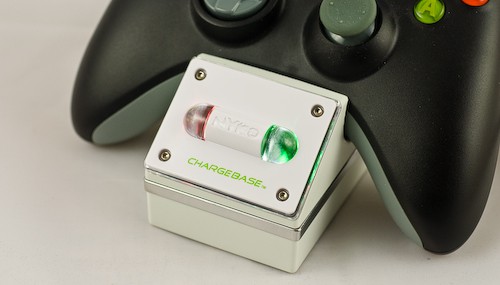 The Charge Base 360 includes a very bright indicator light, one for each controller. Green means the controllers are charged, Red means they are charging, and off means they are fully charged. But isn’t green also charged? I’d rather see the green because to me, green means go. Charge times are anywhere between 150 minutes for a single charger to 280 minutes for both controllers. My first charge was about 4 hrs, which is roughly correct, though the batteries probably have a bit of a charge on them to begin with. My unscientific tests deem the batteries to put out roughly the same play time as the OEM rechargeables, but then again, I have been good and dropping them into the Charge Base 360 when I’m done.

The Charge Base 360 seems to have this great way of allowing the controller to find the right point in the charger. I’ve tossed them in totally crooked, and they seem to find their way to the dock properly. Despite all the warnings about not putting the contacts in liquid or subjecting them to sweaty palms, I haven’t been shocked yet, though I probably wouldn’t try to do that on purpose. I’m sure it’s just more cover your ass language by the NYKO lawyers.

Overall, I really liked this product. It gives you a place to put your controllers instead of leaving them on your couch and having someone sit on them (or having them fall into the cracks of the couch cushions). Except for an initial fitment problem, the battery packs do seem quite well put together and the base has a substantial enough amount of weight to keep it planted. Repeated dockings with my Xbox 360 controllers did not seem to faze it. Yes, I did actually did get bored one day and tried dropping each controller in about a hundred times to see if anything would fail. 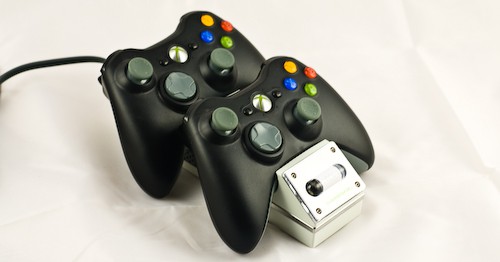 The Charge Base 360 does have a way of guiding the controllers to their destination to begin the charging process. Helpful for those times when you’ve got the caffeine jitters or when your hands are locked from fatigue at a marathon gaming session. The batteries charge within 3 – 4 hours depending on if you have one or two controllers dropped in and don’t seem to last any more or less long as a standard OEM battery pack. Long term use may reveal other details.

As far as nitpicks go, they are few, though I would love to see this in black to go with my bawlin’ black Xbox 360 ELITE (a limited edition Black was released earlier in the year). One thing that might be an area of improvement for the future would perhaps be the ability to charge the batteries seperate from their controllers. Currently, if you forget to drop the controllers in the dock when you’re done, you’ll be greeted with a dead battery. You can’t simply drop the battery itself in the dock and have it charge while you find a surrogate. It would be very cool if the batteries could be charged on or off the controller. Finally, a detachable power cord would be lovely in case the family pet gets hungry and takes a bite.

Overall, the NYKO Charge Base 360 is an excellent addition to your arsenal of XBox 360 accessories, providing both convenient storage and a rechargeable battery alternative to both the OEM and low quality knock offs out there. Not mention, for about $40.00 on the street, it’s a real steal.