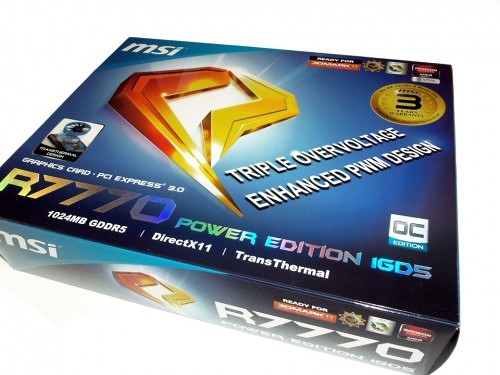 Being trapped in the middle of something is usually not a good thing. This is especially true of most products as being in the middle usually means people will overlook it for a “better” product. I personally love the middle since a hand full of those items are under rated and more budget friendly than top tier products. The MSI R7770 PE1GD5 is a graphics card stuck in the middle of a large selection of these “other items”. So lets take a good look at why  this one stands out more than the others. 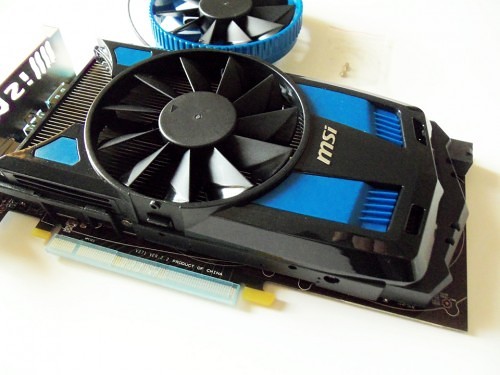 As an AMD 7000 series chip the MSI R7770 also has the benefit of the ZeroCore feature, supports unified address space, PCI 3.0, and a liquid chamber cooling system over vapor chamber. This is all designed by AMD to move toward a more efficient design to reduce heat, noise, and power use while not losing any performance. Obviously MSI has made some tweaks to the cooling design which we’ll get into later. 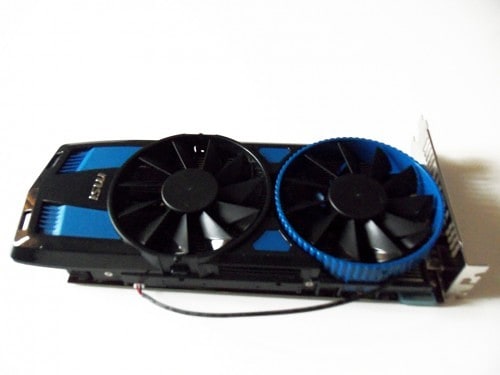 MSI took that base and expanded on it with the R7770 PE. First the PWM is way over-speced with a 3+1+1 design (2+1+1 being reference). This allows the GPU to properly regulate extra current to allow for better overclocking. New to the AMD cards from MSI is the dust removal technology. The fan(s) on the R7770 PE will spin at high speed in reverse when initially turned on to loosen or remove dust build up. This is a very innovative feature that allows a GPU cooling system to continue to operate at optimal efficiency which is good for overall performance.

The cooler is also an MSI TransThermal cooler which allows you to change the configuration of the fan(s) to fit your needs.  The single fan mode is for reduced noise, while the double stack formation of the fans improves air pressure. You can also put it in dual fan mode which can improves cooling.

The latter two modes do come at the cost of space as the double stack mode brings the card to 2 1/2 slots and the dual fan mode increases the card length to 11 inches (9.17 inches normally). MSRP of the MSI R7770 Power Edition is $149 US but recent price drops have put it into the $129 US price range at some major retailers. 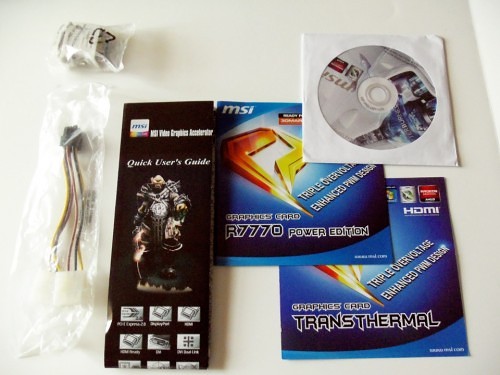 The collection of items included with the R7770 PE is meager, but unique. You get your standard user manual, driver CD, and the card itself. It also comes with a single DVI to VGA adapter and two 4-pin molex to one 6-pin PCIE connector. The last two items makes it clear the target audience for this card are those looking to upgrade pre-build systems with lack-luster graphical performance. 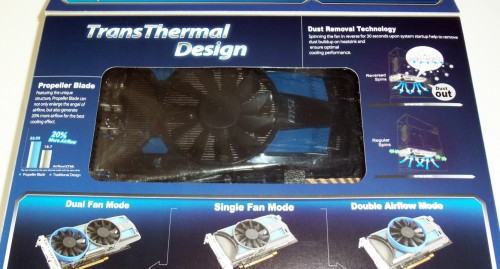 The R7770 PE also comes with an additional fan for the TransThermal cooler. The box art itself is a little too busy for my taste. It has a great color scheme, but there is just too much going on with little information being given. On the back you get the standard list of features with no explanation and some system specs. The box does have a flip up top so you can see the card and details about MSI features. This is a great addition to the box design that I like to see done more.

The MSI R7770 PE1GD5/OC is a intriguing thanks to the MSI additions. This is a good thing as the manufacturer is actively taking measures to improve on the reference design. But at $149.99 MSRP, will it make us think any better of it over the Sapphire Radeon HD 7770 GHz Edition OC we reviewed not too long ago? Let’s find out!