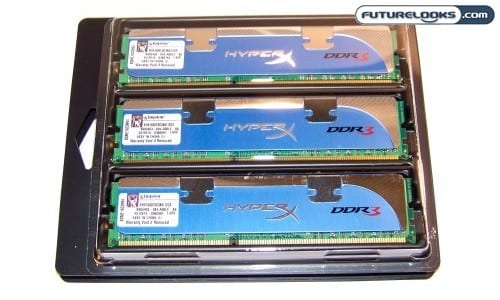 I often hear both consumers and industry professionals tell you that you can’t have enough memory. If you have deep pockets, then sure, why not max out those slots.  But if you’re on a budget, then there is a line where diminishing returns take place. Not to mention, if all you do on your computer is web browsing and emails, there isn’t a whole lot of benefit to maxing out the RAM. Even many games don’t benefit from a ton of PC memory. So who’s gaining the most from lots of RAM?

Some folks really do find themselves in situations where a ton of RAM does make a difference. They work with really resource intensive programs that quickly use up more than the seemingly standard 4GBs of memory. They may be professionals that edit and render large amounts of audio and video or who run multiple VM sessions.  These are the users who would and could benefit from using the Kingston HyperX 12GB 1600MHz DDR3 “Dual-Triple” Memory Kit.

The KHX1600C9D3K6/12GX comes in two separate packages with three 2GB modules in each package. For those who are weak in the maths, that’s six 2GB modules in all totaling a healthy 12GB. 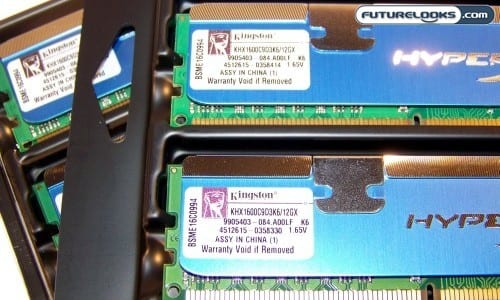 It bares noting that this is a 1600MHz memory kit versus the commonly found 1333MHz kits. One of our astute Futurelooks IRC Channel folks asked why someone didn’t make 1800MHz and faster memory kits. Well, to put it bluntly, it would be pointless. First, the current processor’s memory controllers are maxed out, or spread thin when all the DIMM slots are occupied. Second, all-purpose professional users won’t be overclocking their systems. They require stability above anything else.

The timings of the kit are 9-9-9-27 right out of the package. All six kits are also tested to be equally compatible with each other. We’ve seen instances where tuned CAS 9 kits actually functioned perfectly well when manually set to CAS 8, or 8-8-8-24 timings. We’ll check that out for you in testing. There could be a little extra hidden value inside.

Checking Out the Modules

Normally, we’d like to show you what’s in the packaging. But, this is a pretty simple bundle. Again, two packages containing three modules each. 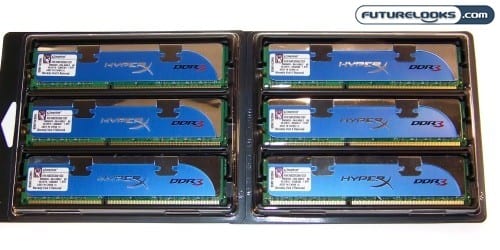 You can see that the modules are nicely wrapped in the HyperX ‘Blade’ heat spreaders. The Kingston blue color still contrast nicely with many motherboards out there. And in some cases, they match others like the latest X58 and P55/P55A motherboards from GIGABYTE and others.

Themes aside, there’s a lot you can do with this much memory. For one, with a good Windows 64-bit Vista or 7 installation, programs will load quicker and can stay loaded before swapping to the hard drive. The 64-bit operating system will allow far more programs to stay ‘cached’ at all times whereas 32-bit users with smaller amounts of memory cannot. You can also multitask to your heart’s content, popping open program after program. 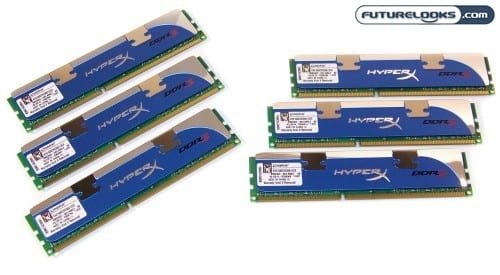 And that’s why professional users tend to be the folks commonly using this large amount of memory. They don’t have time to open and close programs to make room for the next task. Their content needs to be ready, on hand, and accessible at all times without crashing.

Another symptom of low memory performance can often be seen in desktop and laptop computers with 512MB to 1GB. If you have too many programs starting up and not enough memory, your computer will come to a crawl as it tries to prioritize, often swapping to the much slower notebook hard drives. That can be very frustrating especially if it’s a Vista OS that requires about 800MB of memory right from boot.