Last month AMD quietly took the wraps off their latest chipset known as the 890GX. Though the new platform really doesn’t give us anything brand new, it does provide a meaningful update to the original 785G and 790GX chipsets. Thanks to the availability of some very good boards, we’ve had an excellent opportunity to really get to know this new platform and its features. As a result of our extended time with boards from ASUS, GIGABYTE and MSI we’ve come up with insights beyond just the generic benchmarks.

Our experience has been shaped by a trio of motherboards that launched with the chipset. These include the GIGABYTE’s GA-890GPA-UD3H, MSI’s 890GXM-G65 and the ASUS M4A89GTD PRO/USB3. With the help of these boards, we were really able to get to know just what the 890GX was capable of in terms of the user experience. Instead of beating them to death in benchmarks, we challenged ourselves to find things that really illustrate just who this platform is for and why it might very well be AMD’s most versatile and best bang for the buck platform yet.

A Little Old. A Little New. 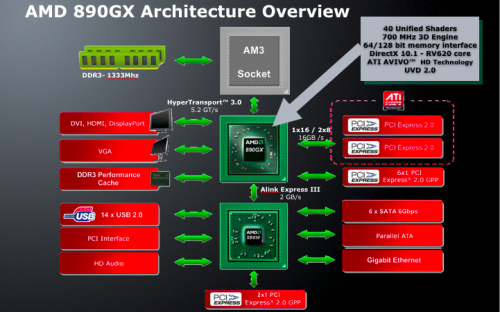 It’s no coincidence that the AMD 890GX diagram looks a lot like the diagram for an AMD 785G chipset. It’s fundamentally the same with a few notable exceptions as noted below…

Other features that are actually part of the platform include AMD’s own Gigabit Ethernet solution with optional USB 3.0 support. Apparently, no one loved AMD’s network solution enough to include it. USB 3.0 support isn’t part of the spec, but everyone is supporting it and AMD has done well to accomodate it in its specifications. This is usually implemented with a third party chip from NEC in most cases. This is true in the case of our review boards.

Doing The USB 3.0 and SATA 3.0 Milkshake Better Than Yours 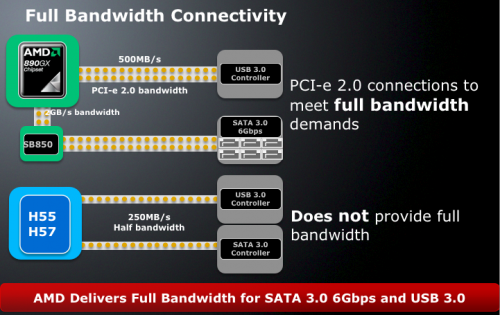 Though INTEL solutions were first out of the gate to integrate optional SATA 3.0 and USB 3.0 solutions, the initial boards met some performance difficulties. Boards that integrated both SATA 3.0 and USB 3.0 had problems allocating enough bandwidth to the two controllers. This lead to performance anomalies that affected graphics performance when both solutions were sucking bandwidth away from the PCI-Express lanes powering the GPU, among other things. This of course has been addressed by board manufacturers on their own terms, but it was still a bit of an afterthought.

AMD decided to integrate the SATA 3.0 6Gbps controller right into the SB850 southbridge, thus removing a potential performance bottleneck. This also allowed AMD to provide enough bandwidth to the PCI-express lanes to support an add on USB 3.0 solution. The result is a solution that avoids the issues surrounding the initial implementation on some INTEL solutions. In a nutshell, less performance problems for you and me.

Three Motherboards and a Reviewer

In order to give you the lowdown on this new chipset, we’ve been provided with three solutions:  GIGABYTE’s GA-890GPA-UD3H, MSI’s 890GXM-G65 and the ASUS M4A89GTD PRO/USB3. Thankfully, unlike reference video cards, these three AMD 890GX solutions are very well differentiated in terms of features. Though in reality, motherboards based upon the same chipset rarely differ greatly in terms of stock performance. You’ll know I’m telling you the truth when you’ve experienced that sensation of indifference as your eyes glaze over at the benchmark charts. All the charts start to look the same and you realize that the last five reviews had the same scores. That’s not to say they aren’t important as they can reveal whether an implementation needs work. But just so you know, we aren’t going there hardcore in this article. We are going to shine a light on the things that make a board an AMD 890GX board.

The title of this article is reflective of how the rest of the this article will unfold. We’re not looking for numbers like how we wouldn’t care if one SUV smokes another SUV in the 0-60 test. Cupholders, airbags, GPS navigation and the backup camera matter more. This is what ultimately leads you to the driving experience you want just like the make up of features on a particular board drive you to it. Otherwise, we’d all be driving Buggati Veyrons. We will also look at features in our subject that give this platform the potential to kick it up a notch as Emeril Lagasse would say. But first, we’ll get to know a bit more about each board.