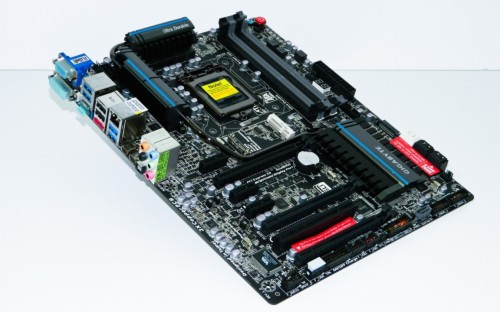 GIGABYTE has been slowly refining their Z77 series and have added a couple new features that you’ll want to know about. For example, the new revisions now feature their Ultra Durable 5 technology which builds even more longevity into their boards and Thunderbolt (formerly LightPeak) connectivity. We want to know how these new features aid performance and most importantly, who benefits most from the new features. Join us for a closer look at the new GA-Z77X-UP5-TH Motherboard. from GIGABYTE. 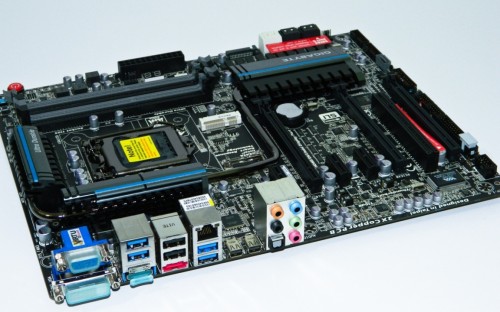 Ultra Durable 5 is very much like the Ultra Durable technologies that came before it. You’ll find their “2X” or 2 ounce copper PCB but with enhancements this time around as well as new IR3550 PowIRstage® ICs from International Rectifier. New high current Ferrite Core Chokes rated up to 60 Amps have also been implemented while much needed digital power voltage regulation has also been added. The benefits of these technologies are less power loss and greater efficiency which results in less heat generated by the components supporting the CPU. 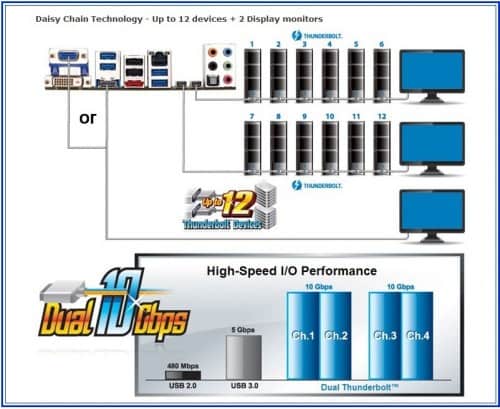 Intel Thunderbolt (formerly known as LightPeak) rounds off the latest feature updates. The GA-Z77X-UP5-TH comes with dual Thunderbolt ports as well as PLX 8605 controllers which ensure maximum transfer bandwidth whether being used for storage or displays/monitors. While the maximum transfer rate is 10Gbps, we’ve seen linked devices transferring 800MB/s for immensely flawless video play back over multiple displays. Unfortunately, there are very few if any Thunderbolt devices available and it’s going to be some time before we see more. Nonetheless, GIGABYTE has looked towards the future with not only one, but two of these ports, which is fairly uncommon to see.

Other than these two notable updates, the board has every extra feature their Z77 series features including mini-SATA all the way up to Lucid MVP and Intel Smart Response. For more detailed specs on the GA-Z77X-UP5-TH or the GA-Z77X-UD5H Series motherboards, head over to GIGABYTE’s website.

Retail price of the GA-Z77X-UP5-TH is in the neighbourhood of $249.99 US. A lower cost “UP4” version is also available with Thunderbolt, but some feature downgrades for around $179.99 US. 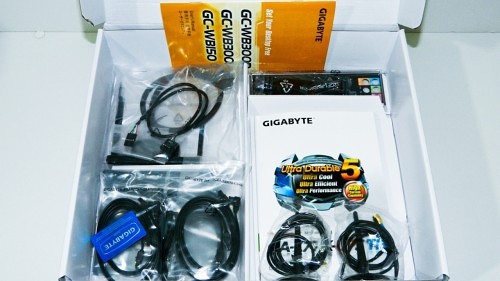 The UD5 series and UP5 boards have extremely similar layout and button placement. However there are specially marked new chokes around the CPU socket and driver MOSFETs underneath the heat sinks with the heat pipe running through them. These components are the heart of the digital voltage regulation. There are also some new IOQ controllers below the memory slots to keep bandwidth moving. 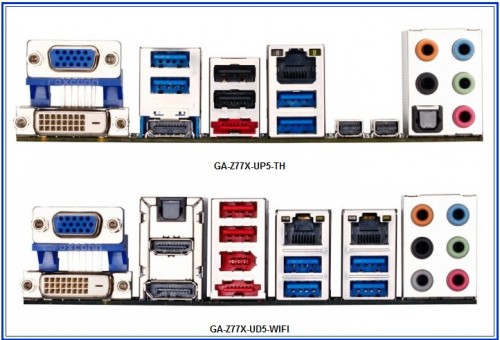 Moving to the back IO ports of the UD5 and UP5, you can see the obvious IO feature changes. A display port, two red USB combo ports, a Firewire port, and one analog audio port had to be eliminated to provide two tiny, but bandwidth abundant, Thunderbolt ports. Honestly, the connectivity  will eventually pay off once all the connectivity possibilities are finally realized.

Let’s see how this board performs in comparison to the Z77 boards we’ve racked up to date.