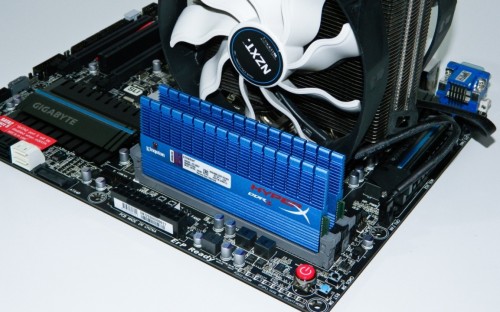 The same motherboards from our world famous INTEL Z77 roundup were included for comparison. While some of the boards have new BIOS that could improve overclocking, our Ivy Bridge chip doesn’t go any higher than it has before most likely due to well publicized poor TIM or thermal performance of the chip, despite the die shrink.

Thunderbolt devices are very rare at the moment but we will return later with a comprehensive test of the true Thunderbolt performance of select boards on the market. It’s possible that manufacturers are holding off in light of the upcoming Intel chipset supporting Ivy Bridge-E so hopefully we see more options in the very near future.

Unfortunately, this means we were unable to get our own Thunderbolt devices to conduct our own detailed tests. We have no doubt that the Thunderbolt ports work but we can’t tell you how well at this point so make sure you keep checking back with us.

Is the Ultra Durable 5 BIOS and Overclocking Better?

Overclocking the UP5 was a bit easier than the UD3H and UD4 boards. The BIOS interface continues to be a little rough in spite of the cool 3D graphics though and we hope that GIGABYTE continues to refine it. What we notice most is lack of smoothness and continuity with mouse function currently.

At the end of the day, our Core i7-3770K Ivy Bridge processor sample heated up to high heaven once hitting 4.9GHz with 1.41 volts. I couldn’t get the memory frequency to 2800MHz due to the processor’s IMC, but I did manage 2600MHz. On the plus side, the BIOS overclocking presets and Easy Tune 6 offered smoother and more successful overclocking results on the UP5.

Do keep in mind that your overclocking results will vary given the variables in wafer fabrication and your choice of memory and other components. 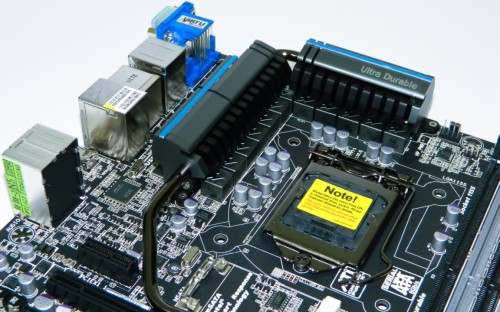 The UP5’s new digital VRM should theoretically mean more efficient power consumption and cooler VREG components especially around the CPU socket. The UP5 was monitored under a thermal camera while running Furmark and Prime95 at 100% load for 45 minutes. Power consumption was measured while idle and at load as well. The key area we’re focusing on are the components to the left and above of the CPU cooler. 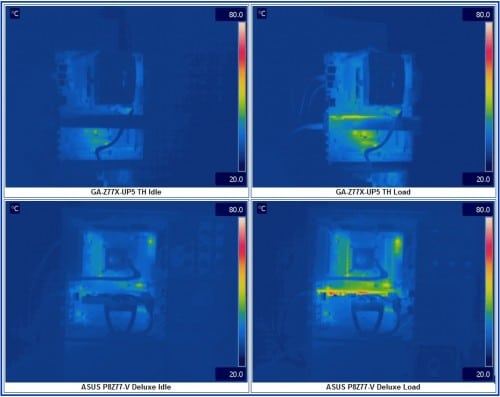 The colors pretty much say it all on the UP5. But for those that want numbers, the VREG heat sink measured 30C and the chokes around the socket reached 38C. The ASUS P8Z77-V Deluxe’s heat sink reached 52C and chokes topped out at 54C.  So overall, GIGABYTE’s claims of a cooler running board are definitely true. But what about power consumption? 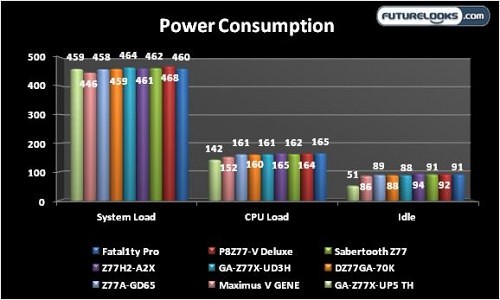 The UP5 consumed a meager 51 watts when idle and 288 watts at load. The ASUS P8Z77-V Deluxe consumed as little as 92 watts at idle and 285 watts at load. It appears that the two digitally controlled platforms manage well with the Deluxe doing a slightly better job on the average at load. For low power idling, the UP5 does a great job and should, in theory, save you more on your power bill in the long run as systems aren’t usually run at 100% all the time.

During the entire testing process, the board was monitored for noise emissions, EMF, and unusual heat issues which is all part of the exclusive Quality Control Initiative at Futurelooks. What I have observed throughout all Z77 testing is that the ASUS boards have consistently provided the quietest boards. GIGABYTE has been quiet except when running fully loaded SLI tests where some random component noise can just be heard.

However, the UP5 provided absolutely no VREG, PCIE, or component noise at any time during our load testing. This platform was completely silent and will satisfy silent system integrators.

Now that we’ve looked at how some of the newest features perform in some aspects, let’s get to the most important aspect of performance which is how they perform in benchmarks!