During CES Unveiled (the press event that officially launches CES 2009), we strolled by the MSI table and saw something that piqued our interest. I pushed aside a few “lookee loos” and discovered something that would give Steve Jobs a third nipple, if it hasn’t already happened. 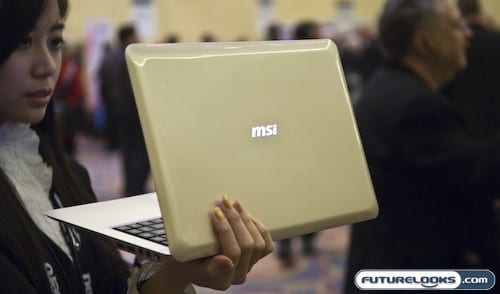 While it is commonplace at shows like COMPUTEX to see products that look eerily similar to some other product, we didn’t expect to see MSI to roll out a product that would have so many journalists ask…”Is that the Macbook Air?” From the 1.98CM thickness (tapering to 6mm at the ends), the 1.3 kg feather weight chassis and the white backlit MSI logo, the new X320 Netbook certainly makes you do a double take. However, unlike the MacBook Air, MSI does give their version a few tweaks to set it apart from the spawn of Apple. 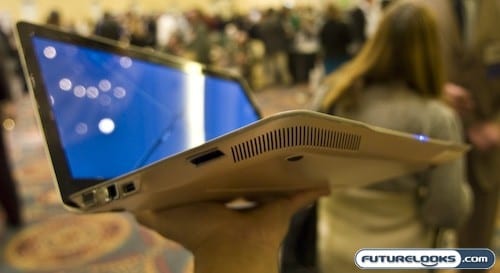 First and foremost, MSI has added quite a few more connectivity options to their X320 including more than one measly USB port, VGA out, ethernet and an SD card slot. There are also separate headphone and microphone jacks. 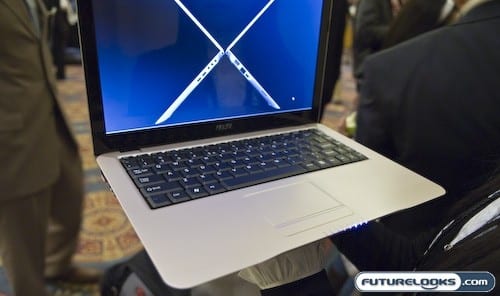 Instead of a chiclet keyboard and an oversized multi-touch trackpad, MSI has opted for a standard keyboard (which felt quite comfortable) and a regular trackpad with what seemingly looks like a single mouse button, but is actually two. Beneath the trackpad are activity LEDs. The screen is a 13.3″ size giving it that golden 16:9 aspect ratio. The bezel on the screen borrows style cues from Apple’s new “Al-Loo-Min-Nee-Umm” offerings and contains an embedded webcam and microphone in the upper part of the bezel. 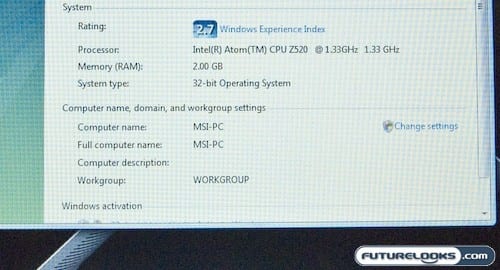 Under the hood, MSI has outfitted the X320 with a Z520 INTEL ATOM processor running at 1.33 GHz and has paired that with 2.0GB of RAM. This makes it no threat to the horsepower that is in the “Real Air”. MSI will likely have multiple storage options from standard platters to SSD for storage.

MSI expects their X320 to launch into the Netbook market at a sub $1000 price point (if Apple lawyers don’t get any ideas first). The price puts it into the premium netbook territory that is currently inhabited by offerings from only ASUS. Competition is certainly good. More pictures of the X320 are available on the next page in the gallery.