Despite the STRIX styled heatsink, there were no anomalies when installing into your standard PCI-Express slot. And since this is a GTX 750 Ti, there’s no PSU power cable required. At your option, you can install the GPU Tweak software, which we’ll get into next.

GPU Tweak and Overclocking the STRIX 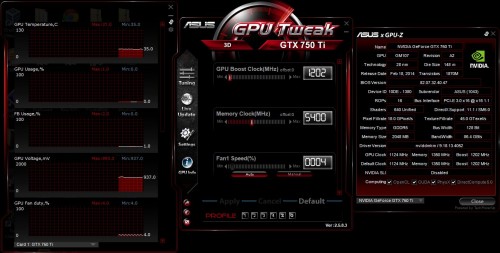 Above, you can see ASUS’ GPU Tweak in all its updated glory. Those are stock frequencies, and although the STRIX series is geared towards mainstream gamers, it’s nice to know that enthusiasts can still poke around under the hood. Clicking the “settings” option in the main tab takes you in. Select the box that allows you to tweak the GPU voltage. Click apply and you’re ready to start overclocking. 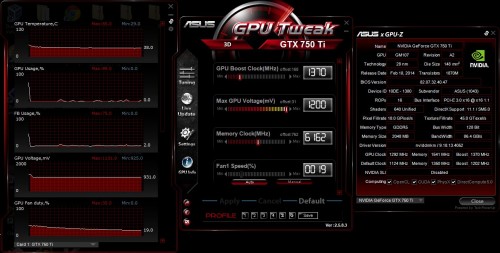 With max voltage selected, and while applying incremental increases in clock speed, the ASUS STRIX GTX 750 Ti OC Edition reached a 1370 MHz Boost clock and 6162 MHz memory clock. Considering it’s already overclocked out of the box, that is quite good. GPU temps for the card were kept well under 80 C, and reached its max potential before temperatures ever became a problem. Not bad for a card geared towards mainstream users, rather than overclockers.

What about noise? Let’s cover that next. 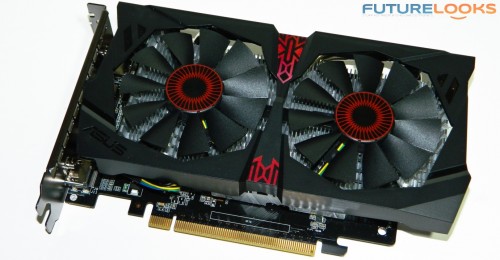 The STRIX version of the ASUS Direct CU II cooler does a fantastic job of cooling the GPU, while remaining quiet. Temperatures rarely reached 60C unless overclocked at load, so the fans don’t spin nearly as high as previous heatsink designs. Here’s the simple version of what you can expect.

The CPU cooler and PSU fan both created more noise than the ASUS STRIX GTX 750 Ti OC Edition. You would have to manually set the fan speed to 100% if you have a hankering for fan noise. In its default auto mode with or without GPU Tweak, you simply will not hear the STRIX. Personally, I recommend leaving it in auto mode – it’s literally silent which is what the STRIX series is all about.

The benchmarks were kept simple. 3DMark 11, Crysis 3, Metro Last Light, Assassin’s Creed III, Battlefield 4 (Single Player), and Unigine Heaven Demo round off the suite. If you don’t have some of the titles to compare, Unigine is free to download. As is 3DMark 11. 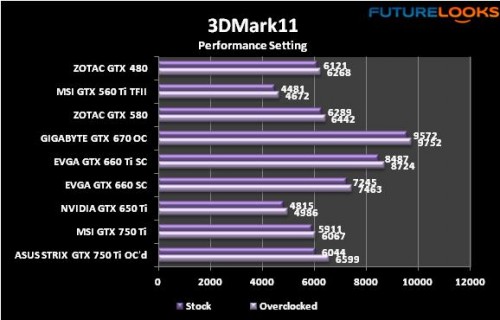 I’m not sure if we just got a gem of a card or what but it’s evident that the ASUS STRIX GTX 750 Ti OC Edition utterly dessimates the MSI GTX 750 Ti OC card. That extra high GPU and memory overclock make all the difference here. It also helps that the card uses a very competent cooling solution, allowing the GPU to stay at boost clocks longer. 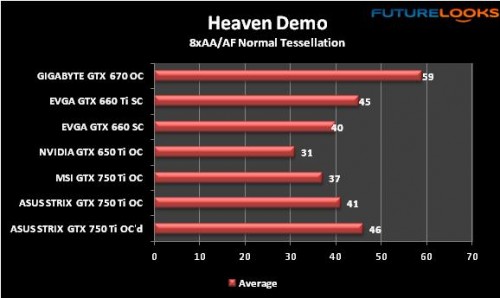 Finishing off our synthetic benchmarks, this free benchmark doesn’t lie or pull punches with the GPU. The OC Edition frequencies make all the difference. However, if you increase sampling and the tessellation to extreme, you’ll see every card here cut in half. If extreme settings are important, step up to a ASUS STRIX GTX 770 OC.

Now let’s get into the gaming benchmarks.