What the Heck is Tessellation? 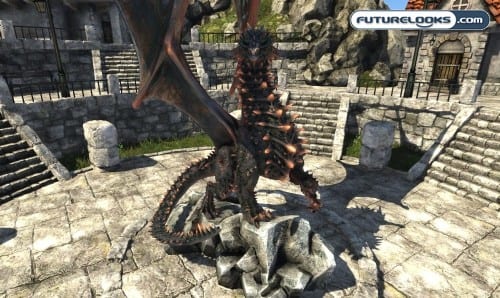 DirectX 11 video cards such as these GTX 400 series as well as ATI’s HD 5xxx, currently offer hardware tessellation. The two new hull and domain shaders double assist the Vertex shader as the polygons are rendered. This results in better balanced and rendered graphical details not easily seen in previous generation video cards. Previous generation methods over detailed some areas and under detailed others creating an unbalanced effect. Using the two new shaders helps prevent the GPU from taking a performance hit when creating such large numbers of poly details. DX11 implements tessellation settings that help correct this issue and improves overall details whether it be mapping or the AI in games.

One of the latest benchmarks to implement DX11 testing is the Unigine Heaven Demo. We’ll take a look and compare results after looking at the card inside and out. 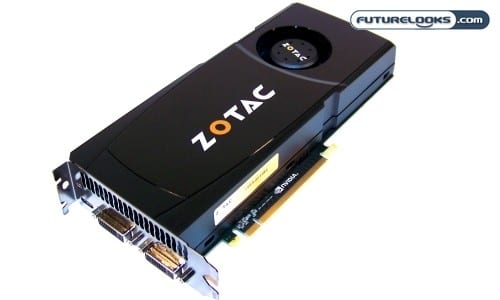 On the outside, both of the new GTX cards are pretty much stock reference models except for the stickers. The fan shrouds aren’t much different if at all from the previous generation. The card lengths change just a bit with the GTX 470 measuring in at just under 10 inches. Thankfully it’s not any longer than usual. The 470 requires two 6-pin PCI Express power connectors to operate. This is essentially the intended video card for mainstream users cautious about spending too much money. 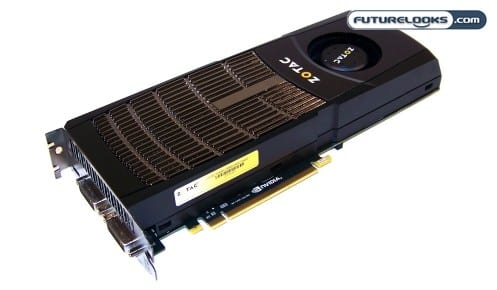 The GTX 480 it measures in right at 11 inches. That makes it as long as the GTX 295. While it doesn’t was as much as the ZOTAC GTX 295, it definitely weighs more than the GTX 285 due to the massive heat sink. The bulk of its weight comes from the larger heat sinks under the fan shroud which covers pretty much every component that produces high frequencies for rendering mad frame rates. 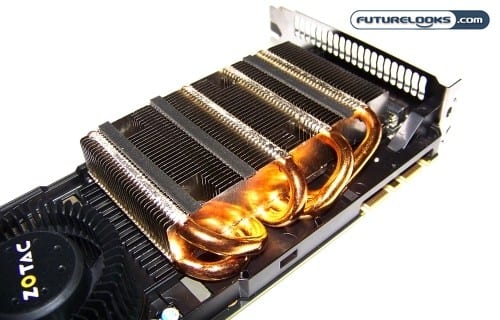 Along with the obvious PCB circuit changes and because the Fermi (GF100) GPU requires a healthy dose of power to operate, the cooling solutions underneath each card had to be revised to some degree. For instance, underneath the GTX 470’s fan shroud, is a rather beefy aluminum heat sink with five large copper heat pipes connected to a copper base. The turbine type fan typically moves about 15 or so feet of air a minute at its highest speed. These fans require high RPMs to move enough air, thus you can expect much fan noise. 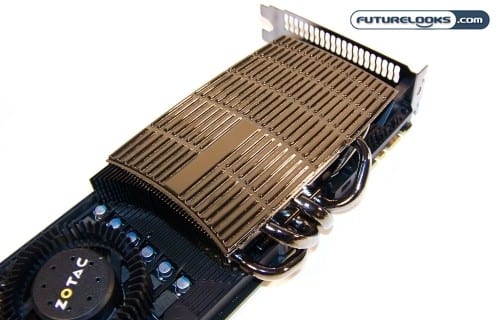 The GTX 480 wins the “omg” award in terms size and weight. This beast of a cooler has four similar sized heat pipes connected to its base. Because the GTX 480 sports higher frequencies which require more power, it makes sense that it would needs a more substantial cooler. Unfortunately, it means extra added weight. It also gets the same rather limited (and loud) cooling fan. Because this GPU is expected to get even hotter during operation, you should expect more audible fan noise and temps. nVidia really needs to get more innovative in this respect.