The fan itself is, as mentioned, is a blower design. This blows air parallel to the blades, and in a radial direction. The plastic chute covers the blades, and makes sure the fan is pushing the air in the right direction. As for the product logos, they prominently adorn the casing and fan hub. Unfortunately there’s no LEDs to light them or add some flash to this to the Propeller II. 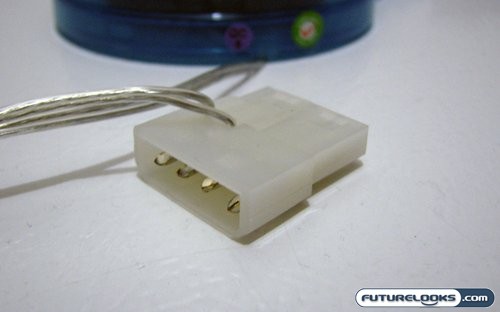 The fan is powered off a standard Molex adapter. Though convenient for most installations, a 3-pin adapter would be nice if for no other reason then to monitor fan speed and activity. Actually that might be a good idea for an upgrade; a variable speed model that goes from dull roar to jet engine either automatically or manually. As it is we have one fan speed, so we’ll have to see how well that works out.

Installation is a straight forward as it could be. Once one of your blank expansion slot covers are removed, all you simply need to do is insert the fan and screw it down. Connect the power to a free Molex connector, or run it inline with one of your peripherals, and you are good to go. 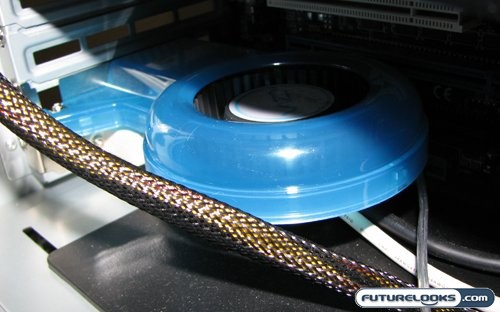 Positioning is an important consideration. Since the expansion cards tend not to have to much airflow in a low end case, it’s recommended to install the Propeller II in a fairly low slot. Alternatively, you can install it directly under the video card. The position of the fan on the Propeller II even manages to match up with the position of the fan on some video card heatsinks. The only thing I’m worried about in that particular setup is that the fan will suck air away from the fan in the video card cooler. Luckily it’s not that powerful.

Now we didn’t use a low end case crammed with the hottest hardware available. We don’t have such a thing in the Futurelooks lab. We are known for sporting some of the best performing cases on our rigs; enclosures that really give you a bang for your buck. The Antec P182 is such a case, and is what is being used to house the test rig for this review. Here’s the rest of the specifications.

Normally I would now be showing off a few graphs, and show-casing the performance gains afforded by using the VIZO Propeller II System Cooler. However in this case I didn’t need to make any graphs. In our test rig, there was less than a degree of difference in the ambient temperature between idle and load conditions. The case and cooling gear we were using more then took care of the heat put out by our test rig. I even moved the Propeller II from the bottom to the case to right next to the video card, but even the video card didn’t feel the affect of having the Propeller II for backup. It’s like the slot fan wasn’t even there.

Actually that description isn’t far off, as the Propeller II system cooler does live up to one of it’s claims. This slot fan is extremely quiet. Not a single decibel was added to the audio profile of our test rig when the fan was installed.

Overall, testing on the Propeller II shows that it is a niche product. I’ve seen other reviews where it makes an appreciable difference, but those are using older cases like the first generation Antec Sonata. In my own uses, I’ve installed slot fans into old cases like the Inwin S500, and used them in OEM computers that needed a cooling boost. When it comes to performance cases, the Propeller II just doesn’t do anything for you.