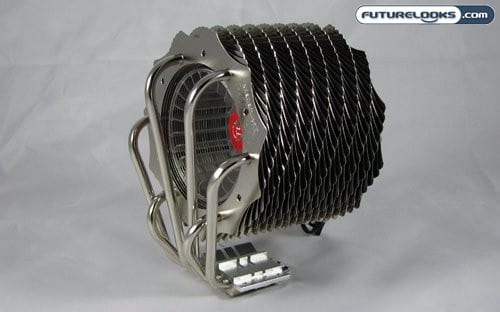 CPU coolers can come in a number of shapes and sizes. The most common and inexpensive coolers are simply a block of fins pointing up from the CPU with a fan blowing down over them. Further up the chain you have towers and heatpipes, which take their fins alignment and air movement and rotate in 90 degrees. From there you get into weird fin shapes and configurations, and different materials and fan types. Most every company has tried their hands at these more unique coolers, with mixed success. Thermaltake is one company that keeps putting out coolers that both look interesting and actually work. One of their coolers seems to take its influence for the ninja. 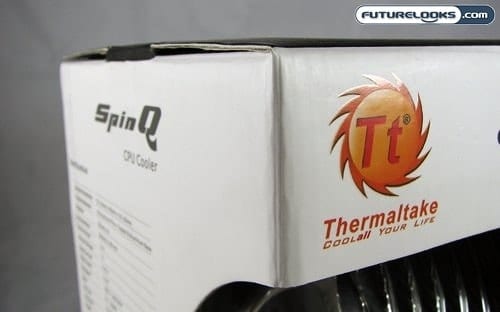 The SpinQ Heatpipe CPU cooler is easily associated with the assassins of feudal Japan due to the row of cooling fins that look like a series of throwing stars. This cooler is a slightly different take on the tower CPU cooler design we’ve seen on Futurelooks many times before. Rather than a simple tower of fins with a standard fan blowing over them, the SpinQ has a series of radial fins with a fan blowing air outward. Heat is fed directly to these fins by way of 6 heatpipes. The design has the dual benefit of being remarkably quiet and efficient, and being able to help cool other nearby components as well.

The fan is variable speed, and has a control attached directly to it allowing manual adjustments vs a PWM design which adjusts automatically based on CPU temperature. If you overclock, you’d want to have it cranked anyway so this may or may not be an issue to you. However, you will have to open your case to reach it as there is no external bracket for you to reach the control once the case is closed.

For full specifications, you can check out the product home page. As for pricing, the Thermaltake SpinQ finds itself at a slightly higher level then many air coolers. Newegg currently has the cooler listed for $60 USD, which is between $10 and $30 more expensive than some coolers from Zalman and the like. Hopefully we get some extra benefit for our money.

A Matter of Compatibility 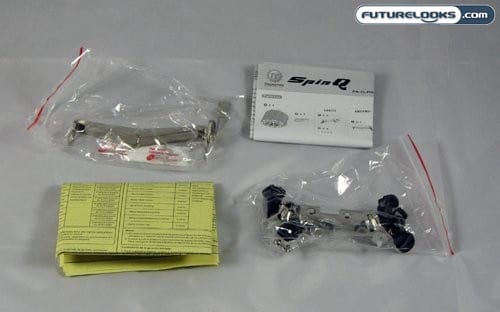 One of the benefits of the Thermaltake SpinQ is something that shouldn’t be a benefit; out of the the box the cooler is compatible with both Intel and AMD sockets.

Since I take care of most of the AMD side of things for Futurelooks I like this, but I really shouldn’t have to point it out. There are however coolers out there that are only coming with mounting for Intel sockets, as either a cost cutting measure or because of Intel’s majority market share. Some coolers include AMD mounting brackets that are pretty half-assed. I’ve actually managed to bend a cooler due to it’s horrible AMD mounting clip. That isn’t the case with the SpinQ though, as both the Intel and AMD mounts included this cooler are solid and easy to install. 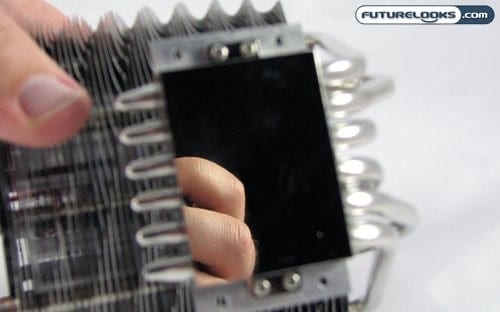 Thermaltake took care in putting some features in the SpinQ that are important to cooling performance. Take the bottom surface mounting plate on the CPU for example, which is the most important part as it’s also the one that contacts the CPU. Unlike many other coolers, Thermaltake has machined and polished the bottom surface to a mirror finish. This is a process referred to as lapping, and many enthusiasts will do this to their coolers to improve contact between the cooler and the CPU and improve cooling performance. Since Thermaltake already does this for you, you’ll get maximum performance from the contact surface and you won’t suffer from “CPU Heatsink Lapping Elbow”.