The Thecus N3200PRO Front To Back 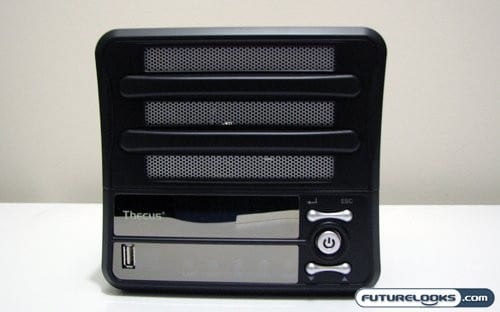 Once everything is unboxed, it becomes quite apparent the N3200PRO is a fairly simple affair, if only in appearance. The front of the unit has ventilation for all three hard drives, mounted on a removable cover. The lower portion of the device contains a display, status LEDs, and external controls. There’s also a front mounted USB port, should you want to hook up a USB memory stick or hard drive to the N3200PRO and further expand its storage. You can also use this port for quick transfers to the N3200PRO from your USB media of choice. 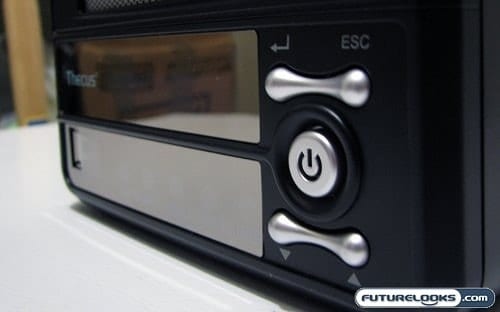 The controls are there should you need to make any adjustments or changes to the settings, and cannot access the web based management tool. As for the display, it’s a multiline VFD with a blue backlight. The LEDs on the strip below it show status for WAN, LAN, and HDD1, HDD2, and HDD3. One thing to note in the power switch, which is backlit in blue. The reason we want to take note of this is because it’s a rather bright light; something that will factor into the setup of the N3200PRO later on. 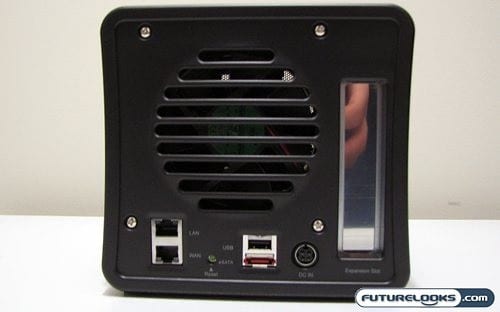 Turning around to the rear of the N3200PRO, we see how things are kept cool and connected. The most noticeable of the rear features is of course the cooling fan. The fan is temperature controlled and of a fairly large size, meaning the device should remain fairly quiet in all but the most rigorous of operations. Also the type of hard drive used will affect this, as the hotter the hard drives run, the harder the fan will have to work. 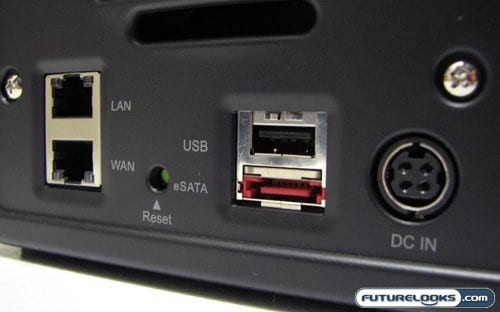 The ports on the rear of the N3200PRO support a few more functions above the simple serving of files to the network. That task is taken care of by the WAN port, which is configured to hook up to your internal network or to an external connection. The LAN port, on the other hand, supports WAN port IP address sharing for LAN and Wireless LAN clients. This means that you can hook up computers to this device, have it dole out IP addresses, and share files.

As for the USB ports, they have the same storage device support as the front, but can also support USB devices live WiFi dongles and web cams. The latter allows you to access the N3200PRO wirelessly, while the former is used in concert with the Web Cam service to act as a video surveillance system. Then we have the power port, and an expansion bay not pictured here that is to be used for future components.