Kicking Off With Forty Combatants

A fighting game isn’t very much fun when you only get to select from a small handful of characters. I thought that Street Fighter IV did a pretty good job with 25 quality fighters, but Tekken 6 goes so much further by offering no fewer than 40 original characters right off the bat. 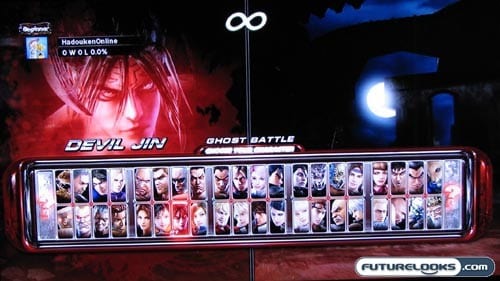 All of your Tekken favorites back for another King of the Iron Fist Tournament. You’ve got Jin, Devil Jin, Paul, Heihachi, Law, King, Kuma, and Dragunov, as well as more recent additions like Raven (my favorite). Joining the cast are newcomers Alisa, Bob, Lars, Leo, Miguel, and Zafina, as well as boss characters Azazel and NANCY-MI847J.

The sheer variety of this cast is terribly impressive and will offer a near limitless level of replay value. It takes a long time to master a single character, so imagine how long it will take for you to get good with all 40 characters.

Plenty of Battle Arenas to Consider

To go along with the huge roster of fighters, you also get treated to a respectable number of game modes as well. There’s the “main” story mode, which I’ll discuss in greater depth in just a moment, as well as a variety of online and offline modes. 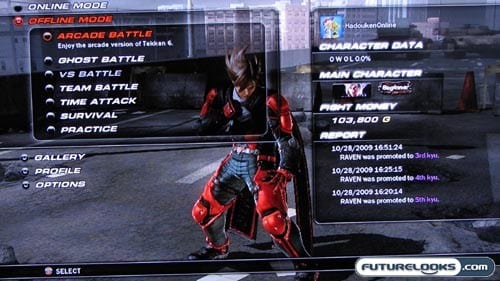 On the offline front, you get the traditional arcade battle for a sequence of one-on-one battles, but where I have more fun is with the Ghost Battle mode. This mimics the experience of having human challengers in the arcade, since each CPU-controlled character utilizes unique costumes and different AI quirks. This is far less predictable and far more enjoyable.

Online matches take on the usual ranked and unranked flavors. I can’t say exactly why it happened, but I found that I was getting a lot more lag playing online with Tekken 6 than I do playing other fighting games online. It’s possible I just have a poor luck of the draw for opponents, but the slowdown is nonetheless very frustrating. 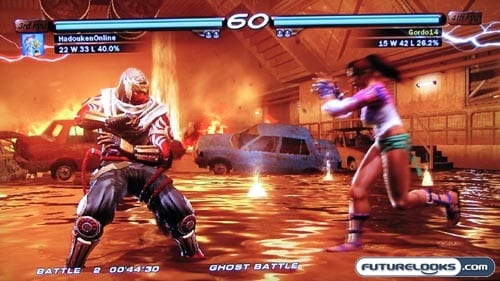 The core gameplay in Tekken 6 remains largely unchanged from previous iterations in the series. You get four main attack buttons, corresponding to each of your character’s four limbs. This is, simultaneously, remarkably simple and incredibly complex.

The great thing about the Tekken fighting engine is that newbies can have a ball just mashing on the buttons. With some decent mashing, you can pull off some killer combos and remain somewhat competitive against (up to) intermediate players.

The more experienced players will quickly tell you, however, that Tekken is easily one of the most technical fighting game franchises this planet has ever seen. There are so many moves, countermoves, combos, throws, strategies, tactics, sidesteps, and more. 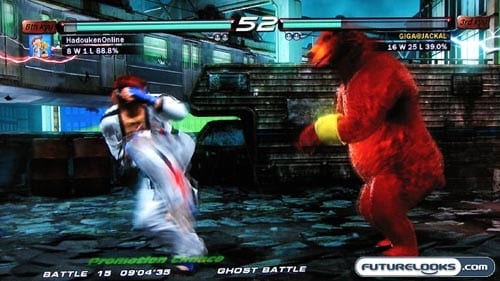 To take your fighting prowess to the next level in Tekken 6, you’ll need to become intimately familiar with your character’s combos, as well as how to best counter the attacks from the other combatants. It’s incredibly intricate and richly rewarding.