Usage with this sort of Network Attached Storage (or NAS) device will vary based on one’s needs. With Synology’s DiskStation Manager or DSM, you have a large library of applications and services you can install on to a DiskStation. I have Git Server installed so that I can make use of source code control when I am working on small programming projects without having to rely on a public cloud-type service such as GitHub. I have Synology’s Photo Station installed and running. This service allows me to keep our smartphone photos backed up and easily accessible. I also make use of it for exporting of my photography so that I can access my photos when I am away from the house. I also have an instance of Plex Server running. I can have Plex serve movies or TV Shows to a Sony PS4, Sony PS3 and a Roku3 without having to ensure that I have originally transcoded them to a format either of those remote devices is capable of.

If you are looking to add new drives to increase your existing storage space, the Synology DS1019+ supports hot swapping. If you have an empty slot, just pop a new drive into the enclosure and then log into DSM and add the newly added drive to the storage pool as needed. Simple!

The network performance of the Synology DS1019+ is limited to the 1Gbps Ethernet speeds. Mapping a drive out in Windows, we can easily utilize a file transfer test between a desktop and the DS1019+. 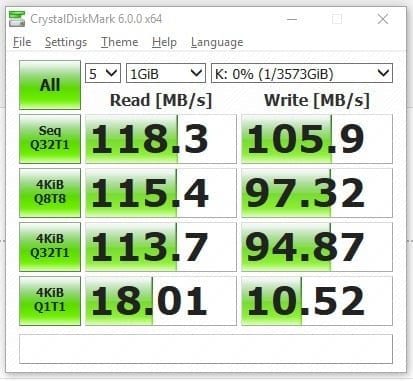 As you can see from the above screen capture using CrystalDiskMark, the read and write speeds are close to the theoretical limit of Gigabit Ethernet. 1Gbps = 125MBps. Accounting for some things out of our control such as overhead and we are pretty much right where it should be in terms of transferring files over the network. To overcome the network bottleneck, one would have to utilize something such as Link Aggregation or 10GbE. This is where the DS1517+ would come into play, the DS1019+ is a replacement unit for the older DS1517+, but a big feature of the DS1517+ is that it has a PCIe expansion slot that would allow one to add a 10GbE adapter card. Of course, the network would have to fully support a 10GbE network to utilize those speeds. Perhaps all future DiskStation models with 4 or more drive bays will come with a PCIe expansion slot? It would help increase scalability for sure.

Video Transcoding of the DS1019+ with Plex

Since we max out the network test due to the 1Gbps Ethernet bottleneck, we can look at how well we can transcode multiple videos to multiple streams without sacrificing performance on the DS1019+ itself. To do this little test, we will make use of Plex and some higher quality digital videos that will need to be transcoded and streamed to a couple of devices.

For this test, we will utilize a 4k video file that has been encoded with h.264 codec at a resolution of 3840 x 2160. The remote playing options are set to a maximum of 1080p with 10mbps to force transcoding.

By default, Plex will make use of software transcoding. This, of course, can put a strain on the DS1019+’s CPU which will ultimately limit how many streams you can have playing and what else the DS1019+ may be doing. 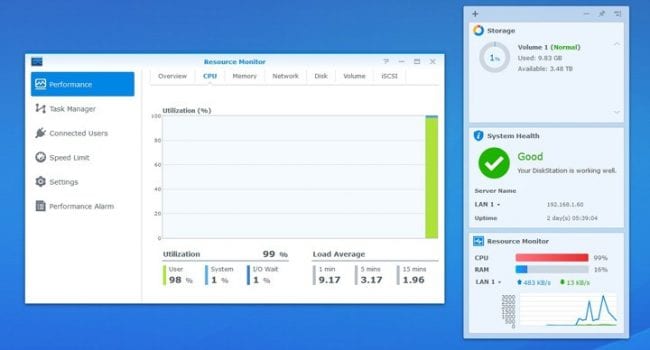 Result: CPU on the DS1019+ was pinned at 99% for two transcoding streams (even pinned for 1 stream), one streaming to a laptop and the other streaming to a smartphone. With the CPU pinned at 99%, any other services running on the DiskStation will suffer a great performance loss. This could potentially hinder other users abilities to do their work on the DS1019+ while the video streams are transcoding.

If you subscribe to Plex’s Premium package, the Plex Pass, you can then enable Hardware Transcoding as the DS1019+ supports this. This will offload a significant amount of the work needed by the CPU so that not only can you have multiple streams running, but other services or actions running on the DS1019+ are not affected. 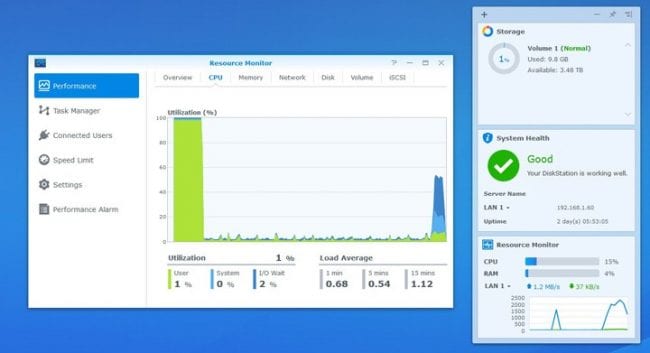 A side note: While looking for 4k video files to work with, we found that Plex currently cannot handle transcoding from a source of WebM or VP9 codecs which is the Google Open Source 4k video encoding. Once a standard is more set in stone, it will be nice to see what Plex will support in the future.