In order to compare the performance of INTEL’s BIOS patch against nVidia’s hardware solution, we ran some benchmarks to find out what kind of performance differences there were  if any. We chose tests which include Crysis, Farcry 2, and 3DMark06. If we get enough call for other benches, we might run some more for you, but this gives you a pretty clear idea nonetheless. 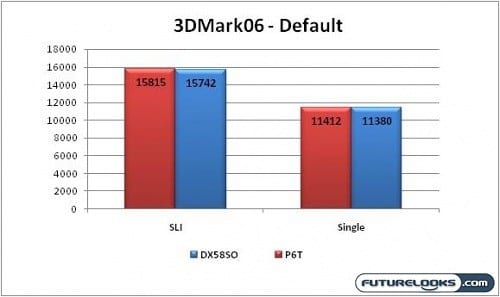 As you can see, these are very comparable results. Any performance gains were negligible mainly due to he P6T being a slightly better tweaked motherboard off the bat. Regardless of whether or not the platform has the nVidia SLI chip, the X58 makes good use of it’s own resources and comes pretty darn close to the hardware driven ASUS P6T. 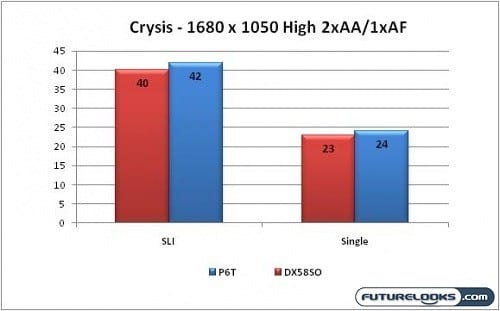 In game performance is only slightly different between the boards, favouring the ASUS P6T ever so slightly. Using two different SLI enabling methods didn’t have a huge impact on the results. The differences were almost statistically insignificant. 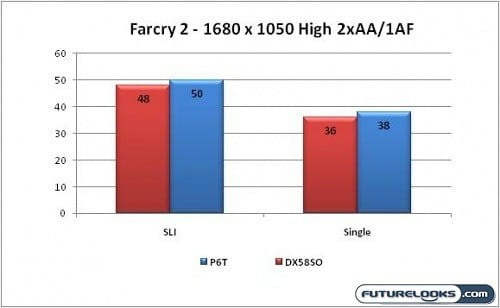 Running the built in benchmark further seated a couple simple facts. One, the Asus P6T is just barely the faster of the two platforms and two, the performance between the two further reveals that the nVidia “NOS” nForce chip isn’t necessary to experience some detailed gaming in SLI. Of course if you have money to burn and want Triple SLI, you will still have to shell out for a board with the hardware bridge.

This conjures up a few thoughts. For example, many of the motherboards that have the nForce SLI chips are more expensive right off the bat and SLI support is one of the main selling features worthy of those higher premiums. Being a gamer and consumer at heart, the question has to be asked: Will other vendors offer a new BIOS to enable SLI support in the lower range motherboards? No responses have come forward as of yet that are in favor of a patch. Until then, one can only hope that a BIOS is released for the more expensive premium Crossfire motherboards to enable SLI. nVidia has said though that they will not stop enthusiasts from hacking their “SLI Cookies” into existing BIOS builds as they win both ways: They’ll sell more cards or they’ll sell more licenses and chips.

The nForce chip isn’t all useless though as it is the chip that makes Tri-SLI performance possible especially on the top of the line motherboards. That’s one thing that the DX58SO can not offer since it doesn’t have the chip. If you really must have Tri-SLI performance, you’ll need a motherboard like the Asus P6T. Otherwise, save yourself some money.