Innovative Thinking at its Best

The SG05 reveals its true inspiration once removed from the box. The case measures in at about 7″ tall by 9″ wide by 11″ deep. That’s about half the size of a standard Micro-ATX case. It weighs in at about 5 pounds if that helps give you the correct impression and is completely manageable unless you are truly a weakling. The only thing missing is maybe a handle on top? 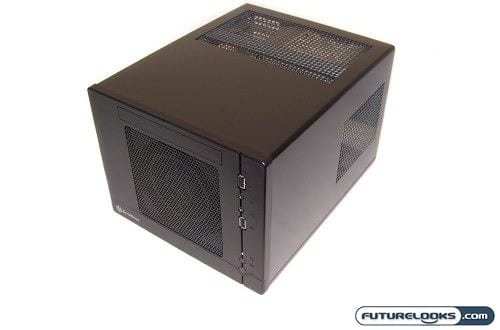 Looking at the front of the case, you can just make out the 120mm cooling fan behind the mesh and filter screen. There’s an access plate at the top which would seem to suggest there’s room for a slim lined CD ROM. However, a little modifying might have to be made to the internal chassis. You’ll see why in a moment. 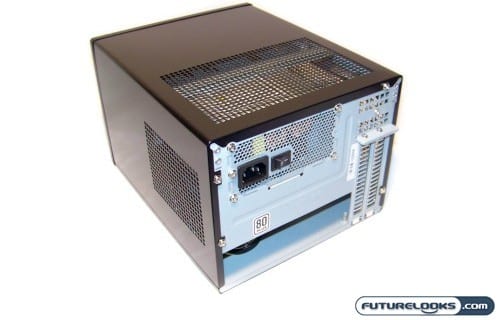 One thing the case offers is ventilation. About half the area of the black case shell is machined out to allow maximum air flow without exposing too much of the chassis. The special case featured at the 2009 Spring Infernalan was modified by Silverstone to offer two plexi-glass windows on each side which points to a potential upgrade kit, or if you’re a modder, pottential ideas for slicing and dicing to make your own custom mod.

The back of the case is essentially a scaled down version of an ATX. There’s the standard PSU placement, I/O area for the shield, and two PCI slots. The two slots are there in case you have a video card that has the dual PCI mounting frame. You don’t want any movement inside such a portable little box.

A Look Inside the Silverstone SG05 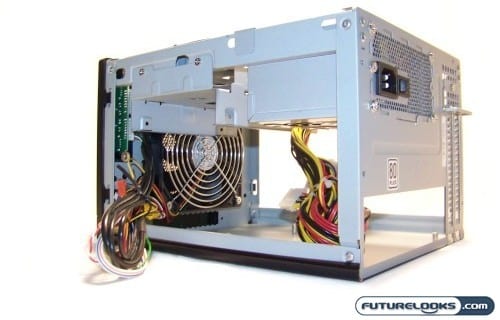 All it took was a Philips screw driver to remove a few screws from the back. The lid slides back, then up and off easily revealing a unique, compact chassis. It’s fabricated with standard steel used in many a computer chassis, but without the extra thickness. Feeling around the chassis, no sharp edges or razors were evident. The metal seems well machined with a little buffing added to limit slicing and dicing of the fingers. You can also see the two places for hard drives near the front of the case. The first spot is quite obvious with its hanging tray. Just above that is another partially enclosed bay for another drive. Two screws hold the bottom most tray in place.

On the top left in the back, you can see the 300 Watt PSU. Its power specs are noteworthy. The 3.3V rail produces 20 amps, 5V rail 22 amps, 12V1 rail 16 amps, and 12V2 rail 14 amps. That’s some nicely allocated amperage where needed. It’s also why it can power a standard Core 2 series processor, 4GB of memory, and up to a GTX 250 video card. The unit is made by FSP Group (Fortron) and are known for making compact server PSUs for mission critical applications. 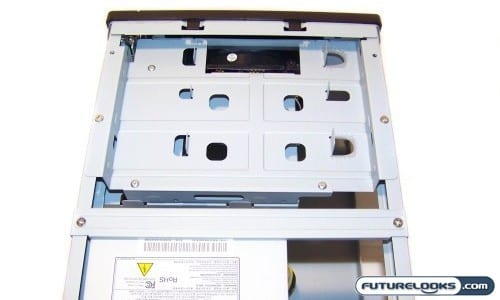 The very top of the chassis has what appears to be a spot for a Solid State Drive or a very fast notebook 2.5 inch drive like the Seagate 500GB 7200.4. This is also where a slim CDROM drive could be added by bending down the tabs as I noted earlier. Silverstone does offer kits called the TOB02 (Blu-ray) and SOD01 (DVD/CD) just in case your local computer store doesn’t stock them. Unfortunately, you’re still going to have to bend tabs to make either one work.

Other details include two holes with clear grommets installed that serve as a means to protect needed wiring for whatever device is installed in this bay.