Test Procedures and Set Up 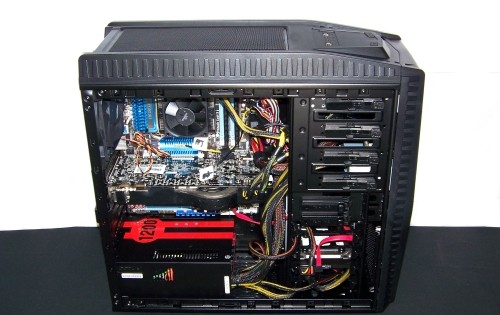 Using a fan controller with temperature monitoring capabilities, five sensors were placed on the components most often the hottest. This includes the top side of the CPU cooler, back of the video card GPU area, motherboard's North Bridge heat sink, and South Bridge heat sink. To measure sound levels, a meter was set up 12 inches from each side of the case.

To get the system heated up so that cooling and noise performance could be monitored, OCCT LinPack and FurMark programs were both run while monitoring the probes. While large amounts of air flow drive down temps resulting in lower fan noise, more efficient air flow will have the greatest effect in controlling the two best. We will be testing the stock configuration as well as a configuration fitted with extra optional fans.

By the time the system got to desktop, the CPU fan had already spun up to about 80% of it's rated speed. This here tells us right away that the idling temps were already pretty high in the CPU. With only one 120mm fan expelling air out the back, this is to be expected. 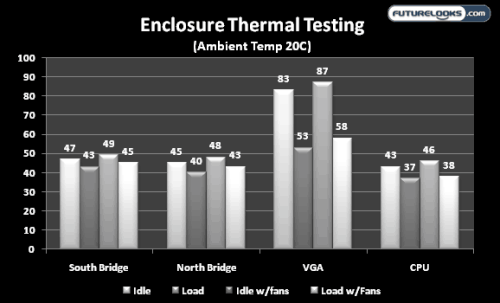 Under load, the system's components heated up quickly. The sensors reported 46C for the CPU, 87C for the VGA, 46C for the North Bridge, and 49C for the South Bridge. This is actually the hottest case we've seen even with a 19C ambient temperature.

To see if extra fans added any improvement, I added two Yate-Loon 120mm 40CFM cooling fans. One exhaust fan was added to the furthest slot to the back and one intake was installed in the bottom front mounting spot. Temps dropped to 39C-CPU, 83C-VGA, 45C-North Bridge, and 47C-South Bridge. While temperatures did drop, noise levels are another issue.

By default, the PS-05 has a very quiet 17dB rear cooling fan. You couldn't hear the fan at all which is both good and bad.  With only a single cooling fan moving very little air inside the chassis, the CPU cooler spun at 75% most of the time at idle resulting in a hefty 33dB. On the same note, it didn't take much CPU work to max out the RPMs and noise. 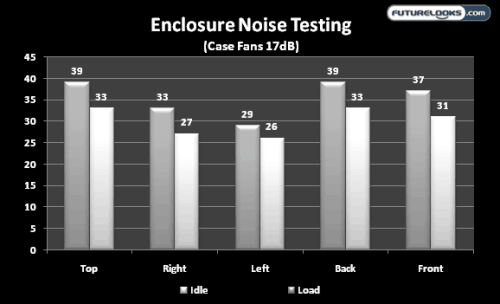 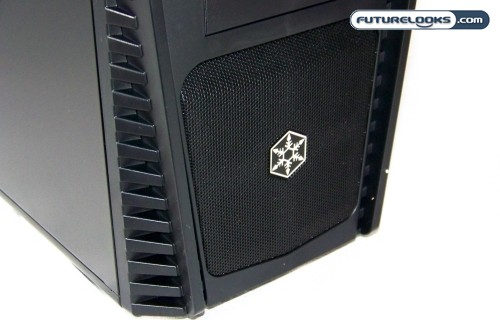 When enclosures include a single cooling fan, we expect the CPU and VGA coolers to rev up due to the low amount of cool air being pushed-pulled through the chassis. We also expect much higher temperatures which is not such a good thing for the life of your components. Heat is still the number one component killer. Knowing this, it would be prudent that any manufacturer take that extra step and add one more 120mm case cooling fans. But on that note, more temperature friendly components could be selected for this case as well.

In its stock form, the Silverstone Precision Series PS05B has great tool free features, follows the industry's best standards, and has quality construction. However, the top dual fan cover hampers cooling without a case fan underneath or a front cooling fan. With the Silverstone PS05B pricing in at a budget conscious $49.99 USD we would strongly advise picking up a couple decent case cooling fans to complete the case. Once addressed, this case should give you years of use and great value.