More Holes Are Sometimes Not Good 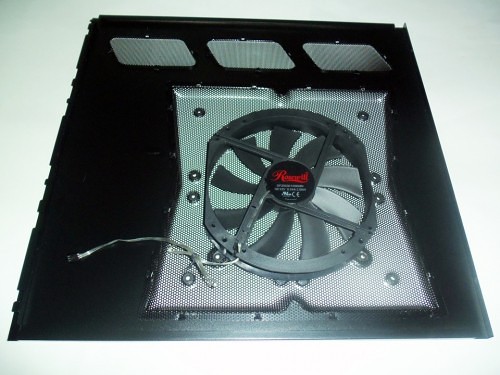 The only other issue I have with the Rosewill Thor V2 is that there is a little too much ventilation. Since this can affect both acoustics and temperature, it’s fitting that we include this part right before we get down to the testign of both.

The side panel has ventilation cut outs that are 75% larger than the 230 mm fan. This includes the additional vents near the top of the panel. The extra ventilation makes controlling the airflow hard, increases noise, and can potentially reduce cooling efficiency. One could tape them off, but covers would actually be better to give back some control. But I’d reason that having less to begin with would have been a better idea, and suggest that they optimize around the most common fan configurations. But let’s see if we’re right about this in the tests.

As with all the acoustic testing, I used a sound pressure meter approximately 1 meter away from the case. As this case has a fan controller, I did all tests twice. Once with the fans at minimum and once at maximum. The results of Thor V2 are highlighted in orange to distinguish them. 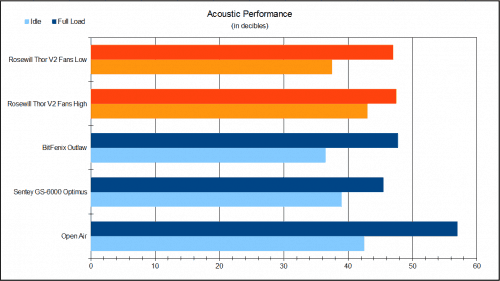 The minimum speed of the fans is very mellow since most of the sound is from air movement. Rosewill did a good job with vibration controls where needed and for providing solid fans. On high, the fans produce enough noise to be noticeable during video playback, so you want to use the low for this. You will not notice it during intense gaming sessions since your attention will be otherwise occupied or you may have a headset on.

The primary source of noise for all three tested cases is the stock CPU cooler. The Sentey GS-6000 chokes the stock cooler enough to be the loudest at idle due to the increased RPMs. This is reversed at full load with the Sentey providing a more controlled air flow and few places for noise to be generated. The BitFenix came in last at full load as the case is very open and only had the one fan to assist in cooling.  The case did provide reasonable noise reduction compared to open air.

In these test, I ran OCCT to stress the CPU, and Furmark to stress the GPU as I have before. After 15 minutes I took temperature readings from AIDA64 Extreme. While I cannot guarantee 100% accuracy, the GPU temperatures in Furmark and AIDA64 were the same. 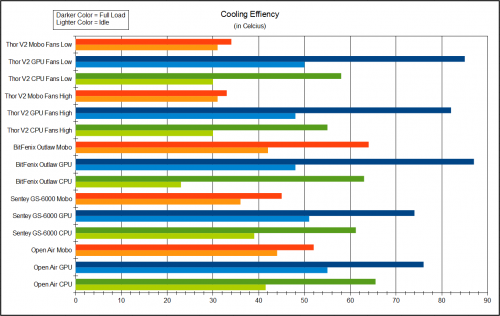 The Thor V2 easily out does everything when it comes to cooling the CPU and motherboard. While the high fan settings do bring down temperatures in every category, it only does so when at full load and only by a few degrees. The only issues seem to be the GPU cooling. Even though the side 230 mm fan is blowing directly on the graphics card, it is struggling to get cool air.

I believe this is due to the excessive ventilation letting air escape before the card can pull in the cool air it needs as we alluded to earlier. It could also be due to the fact the card is drawing air in from the bottom and the air is being blown across its natural flow from two directions. If the latter is the case, this could be corrected by adding a fan to the bottom fan slot. I may retest this case in future just to ensure this is not human error on my part so stay tuned for that in a future case review. 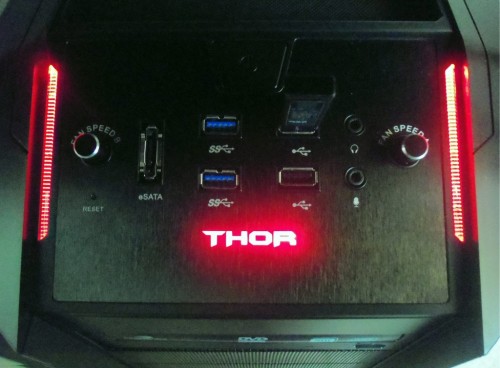 The Rosewill Thor V2 is the basic full sized SUV of the computer chassis world. It will not be the most stylish or have all the cool features its luxury brother’s have, but makes up for it by being built like a tank. I have had the Rosewill Thor V2 for a while now and it has been kicked, dropped, and hit with toys by small children; however, there is still not a single mark on it. It’s solid!

I did cut my arm with the case while carrying it from my desk to my bed when I was swapping out CPU coolers. Anyone who is moving this case around once it is full and pushing the 50 pound mark, should be very careful of sharp corners. This is something that is normally addressed at the higher price point cases, so it starts to show its low end nature with some of these quirks and issues.

In addition to the sturdy construction, the case is designed to house any components on the market today from the largest desktop motherboards to full sized GPU’s. Overall it provided good air flow and cooling with little noise though I would like to have seen better results for the GPU and we think that the excessive venting to make the case side panel more aggressive may be the culprit.

If fancy features come a distant second to durability and value, then the Rosewill Thor V2 at $129.99US may be the full tower case for you. If you don’t like the all black color and want something a bit more hip and trendy, Rosewill just introduced the white Thor V2 at CES 2012 for an extra $10US. Either way, the Thor V2 will likely outlast all the components that you started with and truly gives cases like Antec’s Twelve Hundred a run for its money in the same price point. The case market has just become a bit more interesting.