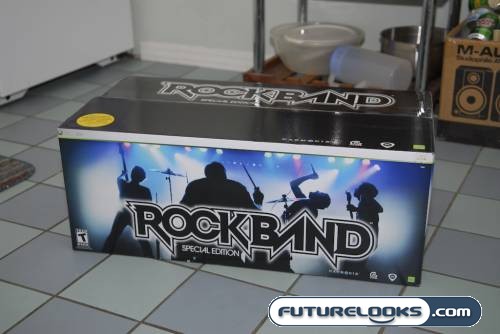 When Harmonix decided that they were going to leave the Guitar Hero franchise behind so that they could develop Rock Band for Electronic Arts Partners and MTV Games, people wondered how the two franchises would ultimately compare to one another. Being the proud owner of both Guitar Hero III and Rock Band, I can certainly say that there are merits to both games, but if you want a truly orgasm-inducing multiplayer experience, you really have no choice but to opt for Rock Band. It really is that much fun.

It’s hard to say whether Rock Band will be able to dethrone Guitar Hero as the reigning champion of the rock-out rhythm game genre, but because there is much heavier multiplayer focus in Rock Band, you can see how the latest Harmonix offering is more suitable for parties. Having the ability to play things other than a guitar — a drum set and a microphone — also add to the variety of the game. All in all, four players can enjoy Rock Band simultaneously and that really is the best way to play this game. 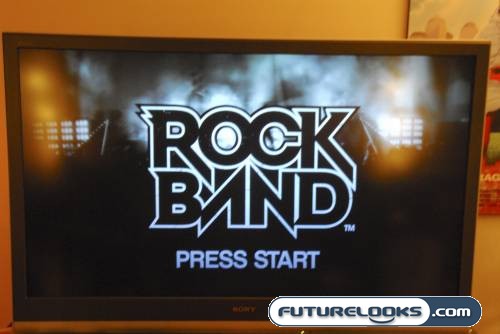 One major thing that may hold some people back from investing in Rock Band is the hefty $170 retail price. That said, when you consider that Guitar Hero costs $100, you’re only paying an extra $70 for a microphone and a drum set. Believe me, Rock Band is worth the price of admission. I personally found the style and graphics to be more appealing than that of Guitar Hero III, but there are areas where GH is superior. I’ll get into these when I talk more specifically about the guitar portion of the game.

One area where I feel Rock Band wins, however, is in the song list.

Don’t get me wrong. Guitar Hero III has a pretty great list of songs too, but I found that the selection in Rock Band to be superior, because it features fewer obscure tracks and more mainstream ones that more of the general public would already know. Because there is a singing portion to the game, they also stuck with English songs only. Contrast this to Guitar Hero where some of the bonus tracks include Hier Kommt Alex by Die Toten Hosen. I’m thinking that most Americans and Canadians would be very good at singing in German.

Here are a few highlights from the main setlist: 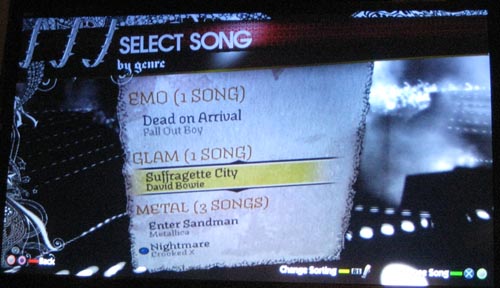 When in Quickplay mode — both solo and multiplayer — it’s nice how you can organize the songs based on difficulty (from warmup to “blistering”), genre (pop, metal, etc.), decade, and alphabetical order. This makes it really easy to find exactly the song you want to play. Oh and did I mention that one of the songs on the list is Timmy and the Lords of the Underworld (South Park). That alone is worth the price of admission. Timm-ay….

All in all, there are 45 songs in the main setlist, as well as 13 bonus songs, and a theoretically unlimited supply of downloadable songs, which can be acquired through the PlayStation Network or Xbox Live. Releases to date include songs by The Police, Oasis, and Queens of the Stone Age.