Design and form factor are important considerations when buying USB flash drives, but who are we kidding? We want speed. And so, I pit these three drives up against one another with CrystalDiskMark 3.0 using the default program settings. Tests were run using an AMD 890GX platform on an MSI 890GXM-G65 motherboard running Windows 7 Professional. We used the USB 3.0 ports for all the tests.

CrystalDiskMark Benchmark for the Rage XT 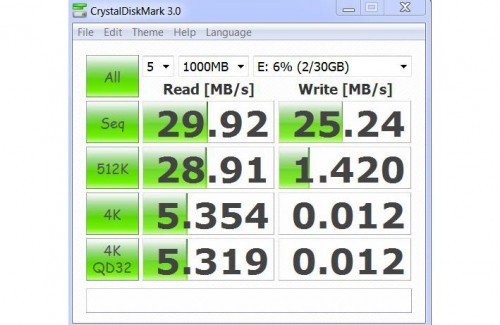 CrystalDiskMark Benchmark for the Supersonic 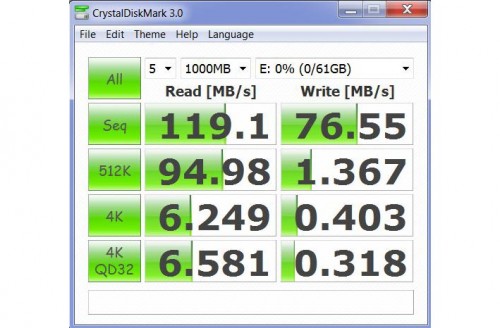 Patriot Memory seems to be understating the performance of their drives. Just like the Rage XT, the quad-channel Patriot Supersonic outperforms its claimed read and write speeds. You’ll also notice a huge jump thanks to the USB 3.0 connection.

The claim is for read speeds up to 100MB/s, but the 1000MB sequential test in CrystalDiskMark recorded a speed of 119.1MB/s. Similarly, the claimed write speed is up to 70MB/s, but this drive was able to do 76.55MB/s on the write test. The 512K test results exhibit a similar trend as the Rage drive, understandably, dropping to 94.98MB/s and 1.367MB/s for the read and write speeds, respectively.

CrystalDiskMark Benchmark for the Supersonic Magnum 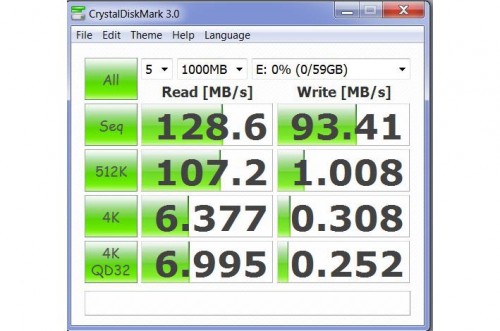 Seeing how both the Rage XT and the Supersonic were able to outperform their claimed read and write speeds, I had some high hopes for the Patriot Supersonic Magnum. Then again, the claimed speeds here are 200MB/s and 120MB/s for read and write, respectively.

Unfortunately, the trend of understated speeds comes to an end with the Magnum. On the bright side, it’s still blazing fast and it is faster than the quad-channel Supersonic. The sequential 1000MB test on the 8-channel Magnum revealed a 128.6MB/s read speed and a 93.41MB/s write speed. The read speed on the 512K random test is faster than the Supersonic at 107.2MB/s, but the write speed is actually slightly slower at 1.008MB/s. That’s a very marginal difference, to be sure, but it is worth mentioning.

Magnum Wins in Speed, But Do You Want It? 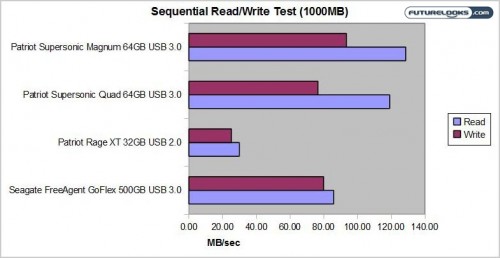 We can come to at least two conclusions based on this USB flash drive shootout. First, USB 3.0 is a heck of a lot faster than USB 2.0. That is undeniable, though it’s interesting that the read speed on the USB 3.0 Seagate FreeAgent GoFlex hard drive is lower than the Patriot USB 3.0 flash drives, but the write speed is higher on the Seagate.

Second, quad-channel technology is generally outperformed by 8-channel technology on these Patriot USB 3.0 flash drives. The Magnum beats the regular Supersonic, but the difference in speed isn’t quite as huge as Patriot may claim in its marketing materials.

Before you rush out to buy the Magnum, though, you have to realize that the 64GB version is still two hundred dollars. That’s not exactly cheap. I also dislike the wider form factor that can block other ports; if that’s an issue for you too, the regular quad-channel Supersonic (especially if you can find it on sale) might be the better buy.