When I took a look at the original Seagate FreeAgent Theater last year, I was immediately disappointed to find that this so-called HD Media Player lacked HDMI output. It seems that everyone was listening. 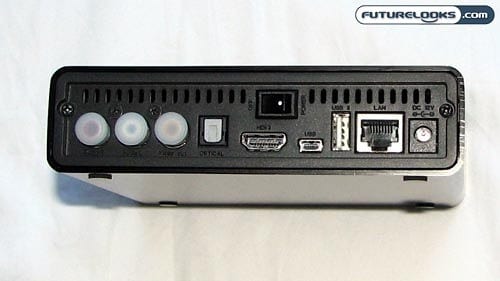 The Patriot Box Office gladly boasts its HDMI port, as well as a port for optical audio. There is no component option, but there are the three RCA ports for composite video and stereo audio.

You’ll also find a mini-USB port, a USB port, LAN port, and DC jack on the back. I like the inclusion of the hardware power switch too, since it helps with the fight against vampire power.

There’s no eSATA port, like what we found with the Asus O! Play HDP-R1, but you do get another USB port in the front for external storage. 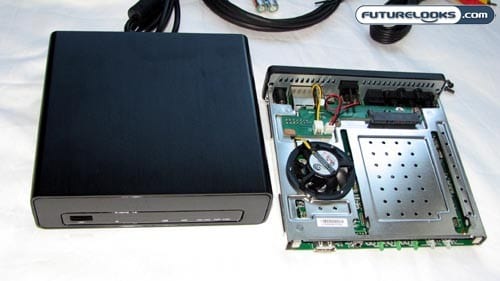 Even technophobes who know nothing about the internal workings of a computer will have no trouble installing a hard drive (or solid state drive) in this media player. By and large, it looks like an external hard drive enclosure, so you deal with a total of four screws. That’s it.

There are two housing screws that need to be removed so you can pull out the guts, and then there are two screws that will hold the hard drive in place. When you install a drive for the first time, the Patriot Box Office will ask you to format it.

In this way, you can’t put in a drive that is already loaded with content. It will all get erased during this process, which takes about five minutes or so, depending on your chosen drive.

BitTorrent Direct to Your Living Room

For me, one of the most appealing features of the Patriot Box Office is its integrated ability to use BitTorrent. 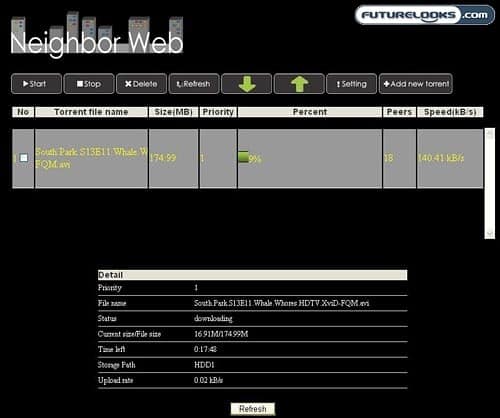 It’s not completely independent, since you still have to initiate the download process from a connected PC, but the download can finish on its own after it has been initiated. I would have liked to have seen an integrated interface for that on the media player itself, so hopefully that gets included in the Box Office 2.0 or a software update.

There is a small bit of software that you need to install on your chosen computer, but this largely leads back to a web-based interface for managing your BitTorrent tasks. The torrent file must be downloaded locally, but the Box Office can download on its own after you tell it where this torrent file is.

This does mean that you won’t be able to use any password-protected torrents, nor will you be able to use torrents that lead to RAR files, but this is still a huge leap beyond other media players. This is almost NAS-like functionality.

In order to use the BitTorrent function, you will need to install the aforementioned internal 2.5-inch drive. It is also notable that running BT (and thus keeping the HDD active) makes the Box Office run quite warm. Using a surface infrared thermometer, I got a reading of 39 degrees Celsius.