Hopping on over to the PlayStation 3, we find a Nyko Frontman Wireless Guitar that comes with a very useful piece of functional extra gear. As you may recall, it is impossible to use a Guitar Hero III guitar with Rock Band and vice versa on the PS3. Yes, all you Xbox 360 owners can laugh it up. Thankfully, the Nyko guitar allows you to switch between the two games using the same guitar. This is achieved through a simple red box shaped like a guitar effects pedal that plugs into your PS3 via USB, much like the wireless receiver that comes with your PS3 Rock Band guitar. 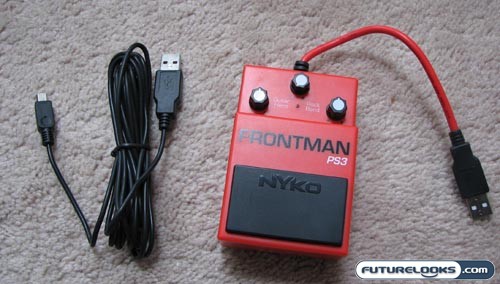 Although there are three dials on this thing, only one of them does anything. I have no idea why Nyko decided to go with non functional buttons. Non functional buttons are kind of like throw pillows you know. On the other hand, the switcher does look like a guitar effects pedal which is cool to have around your kit and makes you a little bit more bad ass…or not. In any case, the functional dial lets you switch between — you guessed it — Rock Band and Guitar Hero. That black pad near the bottom is for synchronization purposes. To indicate the player associated to the controller, there is a light behind the Nyko button on the guitar. A different color corresponds to a different player. I personally would have just preferred four LEDs, like on the SIXAXIS. 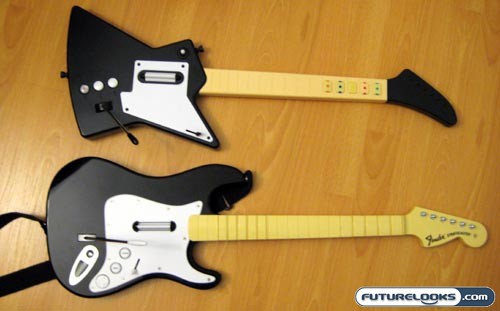 Comparing the Nyko Frontman Guitar with the version that comes bundled with Rock Band for the PS3, I found the former to be a good size smaller than the latter. If you thought you looked a little goofy with the Rock Band guitar, you’ll look even goofier with the Nyko one. Unlike the Wii one, they did away with the ugly yellow and offer you a choice of black and white. Can’t go wrong with that. There are two other very notable exclusions on the Nyko guitar: no second set of fret buttons and no power switch on the back. Both of these are pretty important, I’d say, but they’re not deal breakers. They did include batteries though.

One thing that I did really like about the Nyko guitar for the PS3 is that they moved the switch for toggling between different guitar styles to the edge of the body. I really didn’t like the original placement of that switch so this was a plus for me.

By and large, the Wii and PS3 versions of the Nyko Frontman Wireless Guitar are much the same. The unfortunate fret buttons are exactly the same and it wasn’t just a matter of trying to get used to them. The fret buttons on Guitar Hero Wii and Rock Band PS3 guitars are different too, but I was able to switch between the two without too much trouble. This simply was not the case with the strange-feeling fret buttons on the Nyko Frontman. 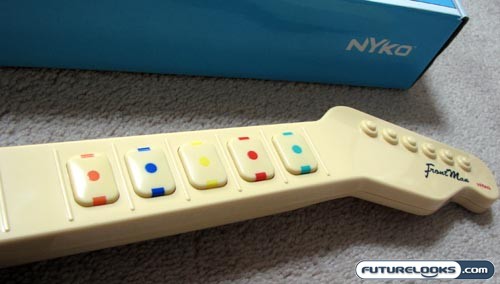 The same can be said about the strum bar. It’s not quite as “clacky” as the Wii Guitar Hero III guitar, but it’s not as “soft and quiet” as the PS3 Rock Band guitar. It’s somewhere in between. This was a little odd to me in the beginning, but I grew to accept it (unlike the fret buttons). Gameplay with either the PS3 or Wii Nyko guitar was much the same, except for how the controllers synchronized with their respective consoles, of course.